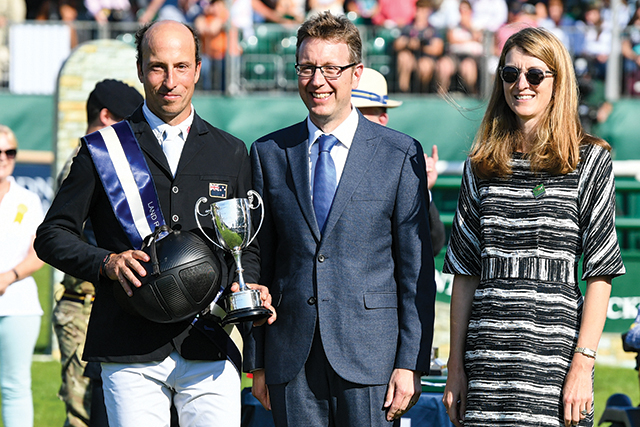 Tim Price admitted he was overwhelmed with emotions after finally achieving his dream of winning the 2018 Land Rover Burghley Horse Trials in a thrilling finale.
The New Zealander and Ringwood Sky Boy finally broke their duck at the four-star event as they pipped defending champions Oliver Townend and Ballaghmor Class to top spot.

Having led overnight after the cross-country, Price jumped clear with the 15-year-old Irish Sport Horse gelding to take the title at Burghley House, near Stamford.

And Price, who had previously finished runner-up, fourth and fifth at the four-star event with the same horse, said that the achievement means everything to him.

“This horse deserves a big day, but he’s the sort of horse that is usually somewhere in the mix, with a couple of good weeks,” said the 39-year-old.

“But to put it all together in one week has been exceptional. I couldn’t be prouder of him and it’s just a super team effort. It means everything to me, it’s Burghley.

“I’d like to think of myself as a very natural horseman. I go through the motions in a competition and that’s my background, working with horses, and you look at Burghley and it’s the place that exemplifies all that.”

While Townend came up agonisingly short of regaining his crown, the world number one performed impressively despite his omission from the British squad for the World Equestrian Games.

He has now finished first, first, second and second in his last four four-star events and the 35-year-old believes Ballaghmor Class was even better than he was when he won it.

“He jumped as well as he’s ever jumped, and he feels on fantastic form,” Townend said. “It sounds a bit strange but he’s twice the horse he was at Burghley last year.

“It’s been a seriously unbelievable year. From Burghley last year to now, every four-star we’ve been to we’ve been first, first, second and second, let’s hope it continues.”

“I left home thinking if he can go the way he can, and I do my job properly, then he could have a chance. While I would have loved to win, for Tim to win is great.”

Family-friendly Burghley is one of two UK-based four-star events and one of only six in the world, with 160,000 people and the best riders on the planet descending on Stamford.

And spectators were treated to the very best equestrian performances in dressage, cross-country and show jumping as they saw a new champion crowned.

Elsewhere, there was also a strong showing from the British contingent, with Sarah Bullimore finishing fourth with a clear jump on Reve Du Rouet.

Piggy French dropped from third to fifth on Vanir Kamira, after hitting the gate at fence four, while Harry Meade and Away Cruising dropped from fourth to sixth.

The multi-award-winning Land Rover Burghley Horse Trials from 30th August – 2nd September has been established as a major international equestrian and social event in the Autumn Sporting Calendar for over fifty years. For more information visit burghley-horse.co.uk