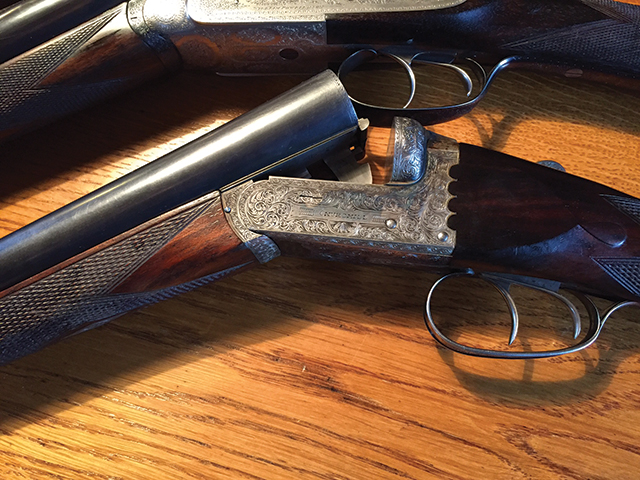 Shooting recently with Richard Gray at Scrivelsby with a team I had not met, as usual people enjoy showing me their various guns. One in particular was a Robert Churchill with 25” barrels, a self-opening premier model being used at the end of the season with 32 grams and 5 shot to some effect. Note the fine detailing and fancy back action, imagine how difficult this gun was to stock!
I have recently been delivered a hammer gun by WR Pape. It has a single Damascus 28” barrel, 12 Bore, carved percussion fence, rebounding sidelock, snap fore-end with a buffalo horn finial, weight 5lbs 12oz. This gun was nearly out of date when it was built to order, sadly we don’t know who for but surely he wandered around the hedges with this beautiful gun just as we can now – £200-300.

William Rochester Pape retailed his guns from the powerhouse that was Newcastle. Most famously he invented and was patentee of the choke boring system, which WW Greener went on to develop. He won the London gun trials of 1858, 1859, 1866 and 1875. He registered several other patents extractors etc. Intriguingly he found time to invent draught excluders for doors and windows in railway carriages. He would certainly have known this gun as he retired in 1888.

Most unusually a Darne V22 12G has arrived. This gun, ‘see the photo’, is a snap opener; it ejects if you hold the gun upside down. Made in France most commonly as a 16 gauge, to assess the quality apart from the engraving and finish you count the dots around the flats of the action – in this instance 22, making it high quality and quite rare. They are famous for only having 44 working parts and also for catching your hand in the action as it flies backwards! £1,500-2,000.

Anyone wishing for a free valuation should contact me, Simon Grantham, Holt’s Auctioneers, on 07860 300055. My next Valuation Day is at Walcott on 14th April.