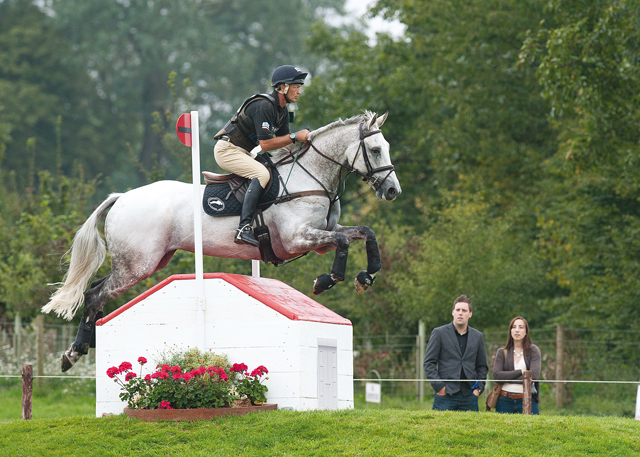 Under starter’s orders at Burghley

The Land Rover Burghley Horse Trials, 30th August – 2nd September 2012
An impressive line-up of riders from an A-Z of nations fills the entry list for this year’s Land Rover Burghley Horse Trials. While there will be many familiar names and faces including former Burghley winners William Fox-Pitt, Mary King, Pippa Funnell and New Zealanders Mark Todd and Andrew Nicholson, there will also be many new – not only from Britain but from overseas.

The knock-on effect of the Olympic Games has brought many riders to the country and both America and Australia have a strong contingent that didn’t make the cut for London 2012 entered, while South Africa, Japan and China all have single first time entries.

As always, however, the question is who will lift the Land Rover perpetual challenge trophy on Sunday afternoon.

British Olympian and London team silver medallist William Fox-Pitt can never be discounted from the final line-up and as always the Dorset based rider, who last year won a record sixth Burghley, has a strong entry of horse-power to help him chase his seventh victory here.

His Olympic team mate Mary King, who last won Burghley in 1996, could be in with a chance with her homebred mare and 2010 Lexington Kentucky winner, Kings Temptress although only two mares – Maid Marion (1973) and Headley Britannia (2006) – have ever won this four-star.

Australia’s Olympic debutant, Christopher Burton (Haruzac) might have bit the dust on his Burghley debut last year but he has since enjoyed an impressive run of success on British soil and British based Aussie, Paul Tapner will be gunning to get his name on the Burghley roll of honour with his 2010 Badminton winner Inonothing. While their compatriots Megan Jones (KP Allofasudden), Emma Dougal (Kelecyn Ice Age), Kevin McNab (Clifton Pinot) and Tim Boland (GV Billy Elliot) might not be familiar in the northern hemisphere, they have all notched up impressive form Down Under.

American based riders have been in the UK for several months preparing for London and eight who didn’t get the call are staying on for Burghley. They will be especially keen to get to the start box after the cancellation of major events due to the wet summer. Although it is almost twenty years since the title crossed the Atlantic (Stephen Bradley, 1993) Alison Springer (Arthur) who was second at Lexington in May, Sinead Halpin (Manoir de Carneville) and Will Faudree (Andromaque) could all make the final line-up.

New Zealand has etched its name on the roll of honour on ten occasions – thanks to its Olympic double gold medallist and seven-times Olympian, Mark Todd (Major Milestone and NZB Grass Valley) a five-times winner here who could catch Fox-Pitt’s record this year. There will be none more keen for a win however than British-based Andrew Nicholson (Avebury and Calico Joe). There is more at stake however as this year Burghley is the final event of the HSBC Classics™ series, a league-style rider competition with a $150,000 first prize to the rider gaining the most points. While Fox-Pitt is the current leader a Burghley win would propel Nicholson to the top of the table and the first prize – providing Fox-Pitt comes no higher than fourth.

Despite there being just twenty-two miles of water between us and Europe, no continental rider has yet won here. That could change this year with strong representation from France, Germany and Belgium. Either London 2012’s Olympic team gold medallist, Dirk Schrader (Hop and Skip) or Andreas Dibowski, both from Germany, could be the first.

A prize, however, is not on every rider’s agenda – many will be delighted to arrive in the famous and beautiful Lincolnshire Park and even more so to compete, especially those for whom this will be a first time. A completion would be the icing on the cake for Paul Hart (SA), Takeaki Tsuchiya (JAP) and Alex Hua Tian (CH) and the other seventeen riders for who this year will be a Burghley first including Lincolnshire’s own Emily Parker.

The famous maxim of Olympic founder, Baron Pierre de Coubertin, ‘It’s not the winning but the taking part that counts’, applies as much to Burghley as to the Olympic Games.