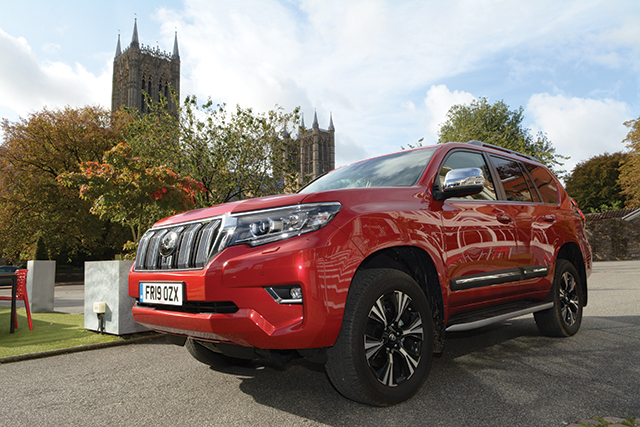 The Toyota Land Cruiser, now in its ninth generation, has become a larger vehicle over the years and has dispensed with its 3.0-litre diesel in favour of a 2.8-litre engine.

There have been other alterations recently, which have brought a different external appearance to the Toyota. The interior has been revised, too; this follows the introduction of a fresh dashboard that now includes a modern infotainment system.

The 4×4 has just one diesel engine choice, but you can choose either a manual or automatic transmission. There are also five and three-door body-styles. The option of seven seats comes with the five-door model, and we tested this version in six-speed auto gearbox guise.

There is also a trio of trim levels: Active, Icon and Invincible. We were handed the keys to the flagship Invincible version which boasts a chrome grille and side steps. The Land Cruiser in this trim also sits on 18-inch wheels.

Kit is bountiful, encompassing a rear-view camera, cruise control and Bluetooth. Additionally, the Invincible has a bunch of drive control systems that make off-roading a breeze. Indeed, during a cheeky run over a craggy bit of land, it felt as though we were on asphalt. But that just illustrates how capable the Land Cruiser is off the black stuff.

In our high-spec Invincible model, we were pleased to find an electric folding system on the third row of seats. It meant we could load up extra passengers in seconds, via a simple press of a switch. Indeed, space in the Land Cruiser is generally good, with heaps of leg and headroom. This is thanks to a high roof and generous footwells. You can also slide the middle tier of seats forward to give more room to those behind you. In fact, the two rearmost chairs are more than satisfactory for adult passengers, which is unusual for a seven-seater.

Mind you, there is an impact on boot space if you have all seats filled. Cargo capacity is 620 litres with just five seats in place. While the generously sized Land Cruiser is good for seven-up, it perhaps won’t be able to carry the luggage of seven people.

Of course, large cars can mean forking out at the fuel pumps. The 2.8-litre diesel is better than the thirstier old 3.0-litre, though, and manages 39.2mpg.

But perhaps more important than anything, the latest Land Cruiser is a safe vehicle. It has a very stiff body and more kit to protect you than you can shake a stick at. Equipment includes electronic stability control, hill start-assist, seven airbags and a blind-spot monitor.

Ultimately, the Japanese-made 4×4 has been around for years, so it’s a reliable and comfortable vehicle for everyday road driving and the one to go for if off-roading is your thing. It is as tough as Teflon, too.