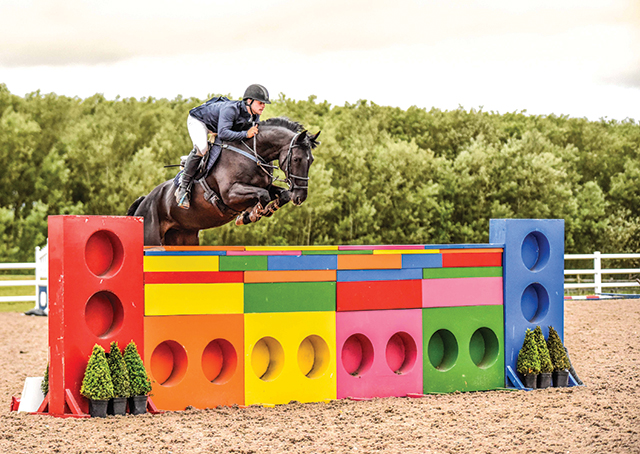 This show is considered to be one of the biggest within Lincolnshire and sees riders travel from all over the country to compete.
There was great jumping throughout the day with the evening classes taking centre stage.

Connair Invitational Masters
• 8 invited competitors
• Elimination if an accumulated total of 12 faults is reached
• Each competitor selects one jump to go up 5cm before they jump
• Winner is the lowest score over four rounds. Jump off if the scores are tied.

ROUND 1
The last fence was raised five times. All competitors jumped clear to progress to the next round.

ROUND 2
Two competitors got knocked out in this round, the last fence being the most popular to be raised again.

ROUND 3
Saw a spattering of faults across the board but all progressed to the final round with under 12 faults. Fence 3 was the most popular to be raised in this round.

ROUND 4
All the fences had now been raised a minimum of two holes from the first round with the last fence raised to 1.48m. Joss Williams riding Coolmoor Prospect and Sara Kirwin riding Ekorette both completed with no faults. Sian Kirwin riding Everton B just had the very last fence down to finish on four faults, placing 3rd.

THOMAS BELL NOVICE PUISSANCE
Seven starters took on the Novice Puissance. Starting at 60cm this was a great class for novice horses. Every horse cleared the first two rounds with ease. Round 3 saw three competitors get knocked out leaving five to progress to round 4. Three more were knocked out in this round, the wall standing at 1.21cm. Round 5 saw Louis Jebson riding Harley and Avril Cassells riding Justin A Var Korna take on the wall now standing at 1.27m. Avril jumped first, clearing with ease. This horse I’m sure will be in the main puissance next year! Louis gave a very gutsy performance having a run out and coming round again, clearing with ease. Avril won £60 plus a Thomas Bell show rug:
• 1st Avril Cassells, Justin A Var Korna
• 2nd Louis Jebson, Harley

SANDERSON GREE PUISSANCE
The big class of the day saw seven starters take on the wall. A good crowd gave all competitors a great welcome. Round 1 saw two combinations stop at the 1.05m wall and get eliminated. The remaining five progressed to round 2, the wall now standing at 1.20m. All 5 cleared round 2 with no problems. Round 3 saw the wall standing at 1.36m. Sasha Munroe Seers was knocked out with just a little clip on the top brick. The remaining four progressed to another round. Round 4 saw a couple of riders clip the wall but it stayed up, with all four progressing to round 5.

FINAL ROUND
Joss Williams rode Kwantos Van Het Mierhoff, in what was this combination’s first puissance. They were just a little keen, sliding the top block off.

Piers Warmoth rode Le’spirit, also the first time this combination has taken on the wall. They cleared the wall easily in front, with just a clip with a back leg, knocking the combination out the competition.

Katelin Fisher rode Carlos, with Katelin having a very exciting technique over the wall which proved a real crowd pleaser. Carlos jumped the warm-up fence well turned to the wall, pricked his ears and flew it with ease.