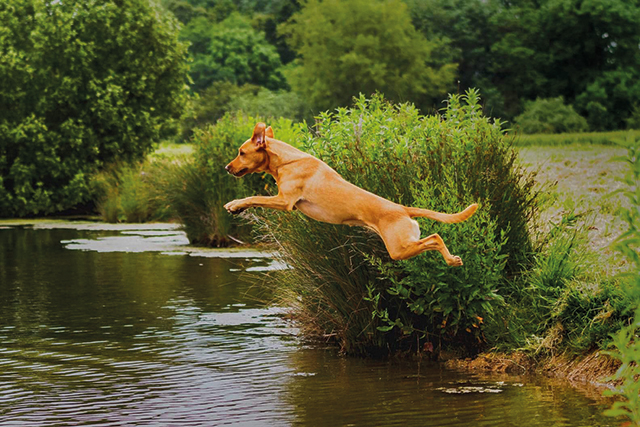 The prestigious Worlaby Shoot, in the rolling Lincolshire Wolds, held a special event in conjunction with the British Asscociation of Shooting and Conservation (BASC), for 24 gundogs and their owners to attend a special training day in late June.
The day was carefully planned so that all kinds of gundogs from spaniels and retrievers to some more unusual varieties of HPR (hunt, point, retrieve) could experience what would be expected from a dog on the Worlaby Shoot.

Worlaby is famous for its rolling hills and fast, challenging birds which can result in the dogs having to be sent huge distances for retrieves, so Gundog Girls trainer Lucinda Southern went through exercises with the dogs and handlers on how to achieve this, whilst panel judge, Mick Newsam concentrated on control and directing your dog with his group.

The duck drives on a shooting day are always hugely popular and the duck itself has been described by Dave Carrie as being a ‘bionic duck’. Paul Birkbeck was given the task of water training on one of the many ponds available.

After the handlers had spent the morning rotating between the trainers in small groups, they then reconvened at the picturesque chapel on the estate. Each of the handlers got to experience a superb taste of game themed lunch provided by BASC sat in the chapel, as guns would do on a shooting day.

After the lunch break, handlers wound their way down the track back into the heart of the estate for a fun competition to put into practice some of what they had learnt in the morning, under the watchful eye of the three trainers and BASC regional officer, Kerry Ellis.

The aim of the day was to promote good practice and how having a well-trained dog is a valuable asset to any shooting day. Many of the handlers were experienced guns who had brought their dogs along to improve and others were newcomers to gundog work and it was a huge success.