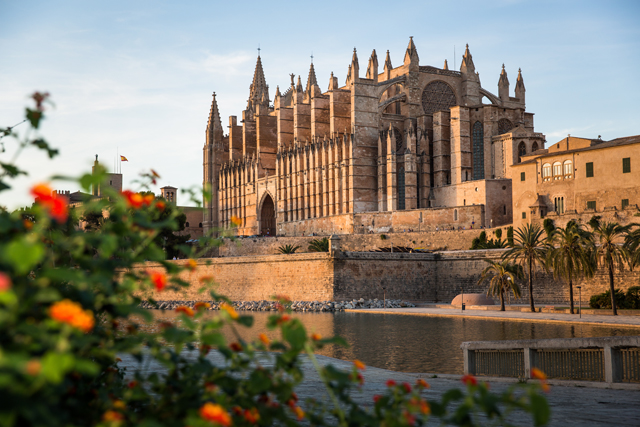 As I flew in, I could spot a few of the two thousand windmills and then a fair number of the many million olive groves and almond trees. And then I spotted villages and already felt transported in a different sense. For here are where occasional men sit where they needn’t stand and guitar music evolves from cafes not street-buskers and the locals stop to be charmed.

Indoors meanwhile, in the covered market named Olivar, there’s a separate world full of temptation, with buckets full of every delicacy, and fish you never knew existed. Bustling, jostling or haggling, the merry housewives collect plastic sacks of leaky produce, while exchanging the daily gossip.

Looking at food makes me hungry. I have two favourite restaurants, one in town and one up in the hills. The Hotel Tres in Palma (Carrer d’Apuntadors) is close by the cathedral and, has the trendy boutique style and a menu that is clever and modern. I was right to choose the risotto though perhaps reckless with an alcoholic coffee laced with the local rum called Ron Amazona. More rustic and attractive to the communing locals, up in Genova, is the Meson Can Pedro. Honest and authentic, it offers local favourites like rabbit and octopus. I escaped the ever-encroaching touristic influence on the island. It consists principally of Brits along with the Germans, with a smattering coming onto the island from other sea or sun lacking countries like Switzerland or Sweden.

Tourism is actually Mallorca’s main business and what better way to explore museums, galleries, a typically vast Spanish cathedral and all the other delights of this beautiful city than the new Palma Pass tourism card. It’s an effective money and timesaving device and once purchased tempted me simply to say yes to any prospect of being a culture vulture.

But then this is Mallorca which after all has a proper Mediterranean history with her Carthaginian, Roman and then Arabic influx and influence. Indeed the eponymous earthenware ceramics we know as Majolica came to Tuscany and Umbria from the island via the Moorish origins at Iznik in Turkey.

It’s where Rupert Graves, the author of I Claudius, came to live and likewise Chopin, with the French writer George Sand, for the winter of 1855 to restore his health and write his Preludes. But the greatest cultural lure of the island has been upon Juan Miro who settled permanently in 1954, leaving an important collection of his works as a legacy.

“We found it difficult to understand why we were unable to find a single inn … in Palma one has to be recommended and introduced some months ahead to twenty of the more important local personages if one does not want to end up sleeping in the open air.” These words from George Sands in 1855 rang hollow in my ears. For I was spoilt rotten by a family who were indeed local personages but who ‘took me in’ with charm and panache.

The many hotels available tend to be sited in tight clusters, fighting for a slice of sea. Out in the suburbs of Palma, in enjoyably easy reach of the city for all the shops and sites, I alighted at the Hotel Bon Sol in Illetas. The appeal of this place is in its history and ownership. Martin, Lorraine and Alessandro exude warmth and consideration. It’s traditional with old furniture and paintings. Errol Flynn was one of the first guests when the hotel opened in 1953. I got to talk to Martin … and his charisma pervaded. “ To make all this possible from the outset we wanted to share it and with guests we like”. And in return the guests like him, returning in impressive numbers year after year, an extended family of sorts, such is the attention and interest he willingly offers. Charm personified.

Adam Jacot de Boinod worked for Stephen Fry on the first series of QI, the BBC programme. Adam is the author of The Meaning of Tingo and Other Extraordinary Words from around the World, published by Penguin Books, and Creator of the iPhone App Tingo, a Quiz on Interesting Words.

Hotel Tres is a stylish 4 star hotel in the heart of Palma with contemporary interiors. Double rooms from €215 with breakfast – advance bookings offer 15% discount www.hoteltres.com.

The Palma Pass can be bought online at www.palmapass.com or www.neoexperience.es or from tourist offices in the city, the Santa Maria Cathedral of Palma, the San Francisco Basilica and the Porciúncula church.