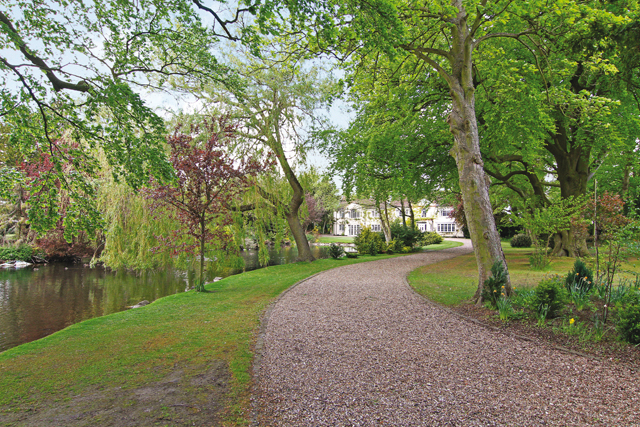 Period charm in a village location

Words by:
Sarah Winstanley Featured in:
May 2014
Share Article

When Bob and Sheila Lawrence found The Beeches at North Kelsey, it was in a neglected state, having remained untouched for ten years.
But the couple could see that the dilapidated building, which overlooked its own lake and was surrounded by trees, could be a magnificent family home.

Bob, who, as a consultant engineer for the oil and gas industry, has worked on every continent except Antarctica, said: “The setting was described to me as the type of place that comes up once in every twenty lifetimes and I had never seen a place like it. Even in its neglected state, I could see what the house could be.”

At the time, the couple were living in nearby Caistor with their two young children (Victoria is now 36 and studying for a PhD and Oliver, 34, works in medical publishing) and had been to see another property in North Kelsey. They were driving out of the village when they passed the grounds of The Beeches.

Bob said: “I phoned a farmer friend of mine to find out who owned the property. It had belonged to a lady who had died ten years previously; my friend put me in touch with her son and we arranged to have a look round.”

The house was going up for auction in November 1981 and the couple bought it and brought in a team of skilled craftsmen and builders to carry out a complete refurbishment and renovation programme in three stages.

The living accommodation – a lounge, kitchen/dining room, four bedrooms and two bathrooms – was the first part of the house to be renovated, so the family could move in in May the following year.

Bob said: “We have copies of the deeds which show the house dates back to 1770 and is clearly Georgian, but it wasn’t listed. Even so, we worked carefully with local planners and building inspectors to make sure the work was carried out sympathetically.

“The house had been modernised in the 1950s, so many of the original features had been removed. We replaced the ’50s flush doors with six-panel Colonial doors, shot blasted the painted ceiling beams and replaced the tiled fireplaces.”

The next stage of the refurbishment programme was to demolish the old stable block and replace it with a garage with space for four cars, a cold corridor, butler’s pantry, coal and log store, utility room and boot room.

Finally, the old coach house was demolished and replaced with living accommodation comprising of two bedrooms, a bathroom and a split-level lounge. This part of the refurbishment project won an award from Lincolnshire County Council for the quality of the conversion.

Bob said: “We reclaimed the two-inch bricks that the coach house was built with and built a curved open fireplace with one side of the bricks, and the convex side leads through to flagstone steps up to the upper floor where we built two bedrooms, a bathroom and dressing room.

“A glass conservatory links the coach house to the kitchen/living room through French doors. I designed the space when I was working in Colombia and it is my favourite place to have a scotch and a lump of cheese and watch the TV news after coming in muddy from the garden.”

The couple are both keen gardeners and over the fifteen years it took to refurbish their home, they spent a great deal of time creating an outdoor space to fit in with the grandeur of the house. The two acres of landscaped, wooded gardens include a Japanese pool garden with patios, pools, waterfalls and streams, a walled kitchen garden and a large ornamental lake. The couple also built a garden equipment store out of reclaimed bricks, which is linked to the house’s alarm system.

Bob said: “One of the things I enjoyed more than anything else was that over the years you could see where we have been.”

He added: “I manage problem jobs on refineries and oil platforms and pick up a lot of stress, so it has been really good to come back home and close the gates on that kind of world. Once you come in through the iron gates and lock them, you have complete and total seclusion and privacy which is important.”

Although the house is private, it is not far from local amenities and it has good transport links.

“The house sits in a dominant position in North Kelsey village but it is not a typical country house set far away from the nearest amenities. You don’t have to get into your 4×4 and drive to get a bottle of milk or a newspaper,” said Bob.

“North Kelsey village has a couple of pubs, a school, shops and a church, and the house is well-located to reach Humberside International Airport with four flights a day to Schiphol Airport in Amsterdam, where you can catch connecting flights. The motorway is only twenty minutes away; there is easy access to mainline railway stations and the banks of the Humber with all its industry.”

After thirty-two years at The Beeches and with their children having fled the nest, Bob and Sheila have decided to sell The Beeches. They intend to move into a smaller new build house which they are building in a nearby paddock.

“In my work, I have accrued two million Air Miles and I am aware now that you do not have an inexhaustible supply of tomorrows. I want to see places I haven’t seen before and spend more time in places I have,” said Bob.

“This house has suited a certain period of our lives and given us an assignment which we have thoroughly enjoyed but now it is too big for just the two of us.”