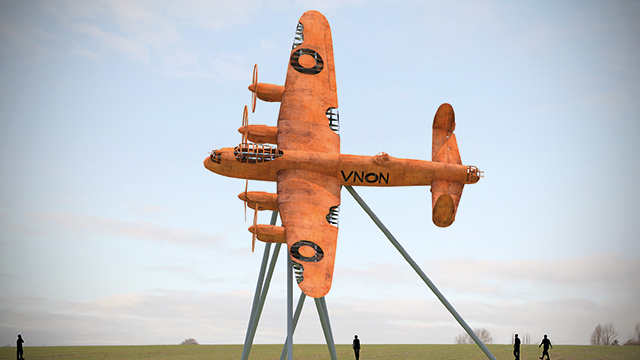 Hemswell Court hosted a fundraising dinner to help towards the £120,000 needed to bring a life-size Lancaster Bomber landmark to life on the Lincolnshire-Nottinghamshire border.
Organised by local law firm Fraser Brown Solicitors, the black-tie dinner raised more than £25,000 for the Bomber County Gateway Trust.

The landmark, called ‘On Freedom’s Wings’, is designed to be taller than the Angel of the North, and has so far been made possible by corporate and public donations. The life-size representation of a Lancaster Bomber will be erected on high ground just off the A46 at Norton Disney, visible to an estimated 34,000 motorists every day.

Guest of honour on the night was legendary Dambuster George “Johnny” Johnson MBE, DFM, who treated guests to a Q&A session with BBC Radio Lincolnshire presenter Melvyn Prior.

The evening included an online live auction via online auctioneer, John Pye Auctions, with a collection of highly anticipated lots, including an original oil painting, of BBMF and Canadian Lancasters, on their 2014 tour by renowned artist Tim O’Brien and signed by Mr Johnson. It was sold for £1,150 on the night.

The auction also included the scale metal model of the proposed Lancaster Bomber landmark which was also signed by Mr Johnson. The unique model, which was previously used for displays and planning permissions discussions, was sold in the online auction for more than £8,000.

John Tansur, commercial director at Fraser Brown Solicitors and event organiser, said: “It was very fitting that the event took place at Hemswell Court, the location for much of the filming of the 1955 Dam Busters film and a stone’s throw away from RAF Scampton.