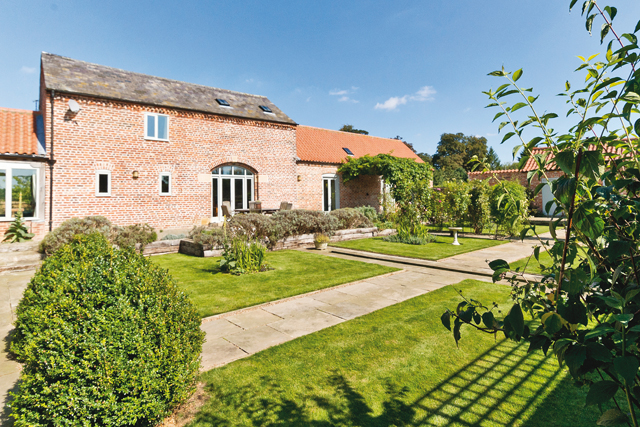 A barn conversion with plenty of character

When Andy Dunlop bought a derelict farmyard with outbuildings in Swaton, near Sleaford, he never imagined it would be his entrance to the world of egg throwing.
But three years after he and his wife Barbara moved to the village and lovingly crafted their home from a series of derelict farm buildings, Andy and his colleagues resurrected the sport. He is now proudly the World President of The World Egg Throwing Federation, a game recognised by Sport England. Even though the couple now intend to move away from Swaton, Andy has vowed to continue in his role.

Andy said: “I intend to carry on my role even after we move away from Swaton because, like Sepp Blatter, I find that my sport needs me and being a world sport, I can do it from anywhere on this planet!”

Originally from Doncaster in South Yorkshire, the couple moved to Cambridgeshire in 1982 where Andy had acquired a post as a firefighter and Barbara worked as a civil servant for the MOD.

The couple lived in a cottage down a single-track lane with beautiful views of the Fens in Glatton, Cambridgeshire. But when a motorway was built nearby in 2001, the noise became too much for Barbara who was by then retired and they decided to move.

At the time, Andy had been promoted to Senior Fire Officer and was part of a team who dealt with major catastrophes in the wake of the 9/11 terrorist attack in America. His work proved vital in helping with UK disasters including the Buncefield oil disaster in 2005, when a series of explosions at the oil storage terminal near the M1 in Hemel Hempstead caused the largest ‘single-seat’ fire in the world ever to be fought by a fire brigade.

Andy, who needed to live fairly near to work, said: “My wife had three criteria: the house had to be in a village with a community, with good transport links and with space around it so the house would sit in the middle of the plot.”

The couple looked at hundreds of properties before finding a derelict farmyard in Swaton which had been used by a farmer to store his machinery. At the time, the mishmash of buildings included a four-bay cart store, a stable, barn, dairy and fold yard. It must have taken great vision to ever imagine this being a home but as soon as Andy and Barbara viewed the farmyard, they fell in love with it.

Andy said: “My wife just said, ‘This is it! This is what we need!’ It had so much potential.”

The couple bought the farmyard and embarked on a year-long project to convert it into a home. During the building work, Barbara and their two dogs and six cats lived in a mobile home on the site, while Andy jokes he spent as much time away from the place as possible.

He said: “It was winter when we moved the mobile homes onto the site and it was freezing. I used to find as many excuses as possible to stay in our crash pad in Cambridge while my wife spent nights cuddled up with the dogs and cats under several duvets in an attempt to keep warm!”

The couple did the labouring on site to keep costs down and brought in local builders to undertake the work. The idea was to connect the old farm buildings to create one fabulous house linked by glass corridors supported by green oak. Then the four-bay cart store opposite the main house would become a garage and en-suite office.

A year later in 2002, once the kitchen and a bedroom were liveable and underfloor heating had been installed, the couple moved in. Andy said: “The project cost much more than anticipated. We came up with a budget then added twenty per cent, then another fifteen per cent and then £100,000 but it was worth it in the end.”

The six-bedroom property has retained many of its original features and has vaulted ceilings in many of the rooms, along with timber beams and original archways. There is a kitchen, breakfast room and utility room with downstairs shower room and stairs that lead up to a study/bedroom. The thirty-one-foot reception room has oak wooden floors and the garden room has tall windows on three sides which open onto decking, overlooking a pond and copse.

Meanwhile, a glazed corridor leads to three ground floor bedrooms, one of which is en-suite, and a family bathroom. On the first floor, an open galleried landing leads to the master bedroom with en-suite bathroom and wardrobe/dressing room.

Outside in the one acre of grounds, a gated gravel driveway leads to the converted four-bay cart store, which is now a triple car port with an en-suite studio bedroom or office. The gardens feature lawned areas and flower beds, an orchard and pond, a small wood, a hidden kitchen garden, a greenhouse, a capped well and dog compound. There is also a paddock.

The couple threw themselves into village life – the village has just sixty-four houses, a population of 204 and an active social life. At the time the annual village show had become a stale affair and the organisers appealed for new ideas so Andy decided to get involved. Knowing a little of the history of the village and its long association with egg throwing, he came up with the idea of resurrecting the sport.

According to village lore, the sport dates back to 1322 when the newly appointed Abbot took possession of the Parish of Swaton by Royal decree. Andy said: “When the church was given the parish by the Crown, they built a church at Bridge End. But to get the peasants to go there, the Abbot gave each one an egg. When the River Eau was in flood, the monks would throw the eggs across the river to the waiting peasants who would catch them.”

Andy had the idea of resurrecting the ancient sport and so The World Egg Throwing Federation was born in 2004. The National Egg Throwing Championships – which has just celebrated its tenth anniversary and raised over £10,000 this year alone for various charities including the Lincolnshire Air Ambulance and LIVES – was born. Now the organisation hosts events around the globe and regularly welcomes participants from Australia, New Zealand, India, Pakistan, Russia, China, the Philippines, Finland, the Netherlands, Belgium, Scotland and Ireland.

Andy travels the globe to attend events and lend his expert opinion. Remarkably, the current World Record for Throwing and Catching an Egg is 76.3 metres by the Dutch team of Smink and Visser. In fact, Smink has created his own technique for egg tossing known as The Smink Forward Snatch Method.

Despite Andy’s love of his sport and the fact that the Dunlops have spent over ten happy years in their home with their two dogs Oliver, a Fell terrier, and Harry the Hound, a sloughi who was found as a stray wandering the village until they ‘lured him with a pork chop’, the couple have decided to move away from Swaton back to their roots in Yorkshire.

Andy, who retired in 2009, said: “This is a great place to live and my wife and I love being involved in village life. In fact I don’t really want to move. But I’d always said that once I retired, we would move back to where our families are in Yorkshire.”

Now the couple have placed their home on the market with Savills and have decided that, once a buyer is found, they will put down roots somewhere near Pickering.

He added: “If anyone offers me the asking price for my house, I will throw in a red Mercedes SLK for free! I went out to buy a ride-on lawnmower a few years ago and came back with the car instead. My wife asked me if it could cut the grass in the orchard which it can’t, but now we employ a youth in the village called Isaac to cut the grass each week instead! We don’t really need the car, so it will be sold with the house.”

Post Office Farm Barns at High Street, Swaton, near Sleaford is on the market with Savills with a guide price of £595,000. For more information contact the estate agents on (01522) 508908.