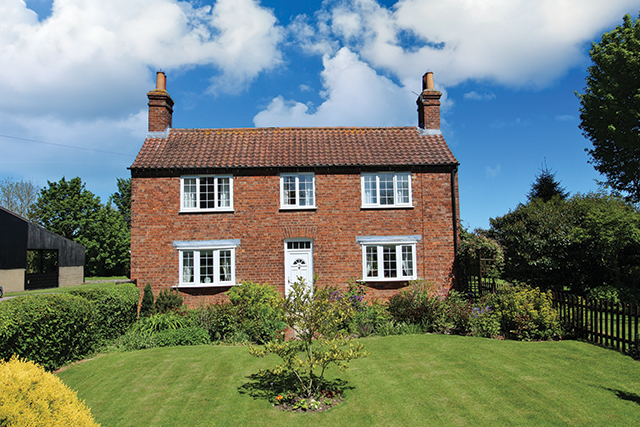 A broad church of options for small farm

On the market with:
Willsons Property Professionals,
124, West Street, Alford.

Nestled in the heart of the Lincolnshire Wolds, Glebe Farm is for sale in three lots: an attractive detached house, traditional buildings ideal for conversion and five acres of pasture land.
The current owners, Mr John Dawson and his wife Vivien, have lived at Glebe Farm for 47 years, for well over 30 of those rearing livestock (beef and sheep) and arable farming at nearby North Reston. When John retired in 2009, he sold the farm at North Reston and as a life tenant of the Church, negotiated the purchase of Glebe Farm.

“I have known the property well for most of my life,” he explained. “I was raised here as my father farmed it before me. He took on Glebe Farm in 1938 but sadly died at quite a young age in 1972, so we moved to what was then the tenanted farm. It made good sense for us. We had three young daughters and the village school was open at the time, which was handy, as were the other village amenities.”

The house and traditional Lincolnshire barns are located next to the former site of St Edith’s Church. They date from 1848 and have all been well maintained, along with the five acres of pasture land, which was home to the family ponies when the children were growing up.

The Dawsons would now like to downsize and probably move closer to family in Louth, so the sale of Glebe Farm presents an exciting opportunity for purchasers to reconfigure the property and land.

“There are three lots: the house, barns and land which can be negotiated depending on the needs of the purchaser. The land is large enough for a smallholding and could be negotiated with the house or divided. We have already gained change of use consent from agricultural to residential use for the barns, so that is another exciting project for a private or commercial developer.”

The house stands in its own attractive gardens with driveway and attached double garage to the rear. The property is accessed via a central front door leading into an entrance hall. To the right is a lounge leading into a sun lounge with patio doors opening onto the rear garden. Ahead are the stairs, which rise over a downstairs WC and shower room. On the left is the dining room, which leads into a breakfast kitchen off which are an office, the sun porch and finally a utility room. Upstairs there are three bedrooms plus master bedroom and family bathroom. The house benefits from oil fired heating and UPVC double glazing.

The property has been much improved and well maintained by the Dawsons. “Vivien and I upgraded the kitchen and bathrooms and extended the property with the addition of the sun lounge and utility as the family grew. In its own right, the house sits in a generous amount of land, but buyers may wish to add more.”

Immediately around the property are delightful mature gardens being mainly laid to lawn and having a variety of trees, shrubs, plants and flowers.

The barns, which have their separate vehicular access, are arranged on three sides with a central courtyard. John has made sure the red brick walls beneath clay pantiled roofs have been well maintained and the Long Barn is of a traditional Lincolnshire style. Planning permission has been granted to convert this and the two side barns into a unique detached dwelling with open plan living and four double bedrooms. Again, there is the option for the purchaser to secure more land with their purchase if it suits their requirements. Behind the barns is a steel framed general purpose building with a concrete floor, which could remain or be removed.

The final plot is the five acres of well established grass paddocks with boundary hedging. This land is open to negotiation with either or both the purchasers of Lots 1 and 2.

John and Vivien have many happy memories of living and working at Glebe Farm. “This has been our family home and livelihood,” said John. “We had lots of fun when our daughters were growing up, keeping their ponies in the paddock, having our sheep grazing nearby and it has been peaceful here with good neighbours in the village.”

There is a popular local pub in the village which has just re-opened following the pandemic. John has also liked his sport and latterly joined Louth Bowls Club. More bowling will definitely be in his plans once he and Vivien have successfully relocated.

South Reston is a small village situated approximately seven miles from the market towns of Alford and Louth. Both towns have a wealth of amenities including doctor’s surgery, dentists, primary schools, both comprehensive and grammar secondary schools, as well as a variety of shops both independent and national and range of eateries and takeaways. There is a range of clubs and societies for various ages. Louth is also home to Lincolnshire’s only remaining cattle market and also has a hospital. The east coast is approximately a 15-minute drive away.