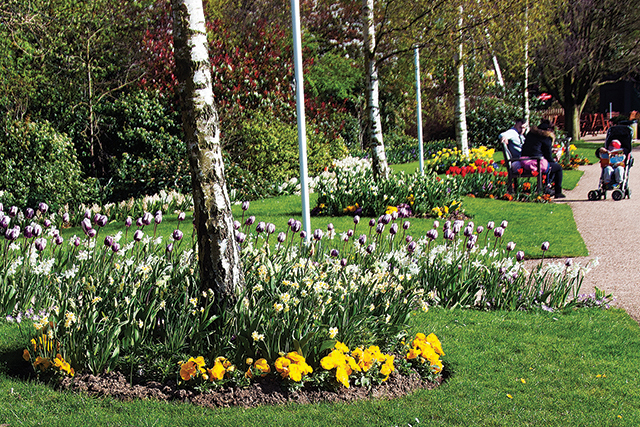 A celebration of gardens!

Steffie Shields celebrates new life and inspiration at Ashfield House, Branston, one of several gardens open this month for the National Garden Scheme charity.
Recently Lincolnshire’s Colin and Erica McGarrigle, owners of Corner Farm, Little Humby, must have been thrilled to see a headline picture of their beautiful garden, singled out from over 3,500 National Garden Scheme (NGS) gardens, to grab people’s attention on their website and in a national glossy. This great ‘Yellowbook’ charity has joined forces with The English Garden magazine to launch an online competition to find ‘The Nation’s Favourite Gardens’.

Once the public have nominated their pick of brilliant gardens created by talented owners, a panel of experts will then select a shortlist before voters get to choose the eventual winner. This unusual, light-hearted challenge set me thinking! Which open garden would I vote for? More importantly, which garden would you choose?

Every season has its stars. Historic Grimsthorpe Castle gardens, with statuary, topiary and potager tick all the boxes for sense of place, not to mention panoramic views of the lake and the park’s ancient oaks. Surely Easton Walled Gardens must be in the mix for the scale of its extraordinary restoration and its sensational sweet peas. Aubourn Hall always scores for glorious summer roses and herbaceous borders. Meanwhile this month Firsby Manor garden displays a unique daffodil collection beside dappled woodland with a forget-me-not charm all its own.

Monty Don would approve of the moon-gate at Marigold Cottage, Sutton-on-Sea, framing exotic views to an intimate Japanese garden packed with unusual plants. Then again, amongst the county’s impressive fifty-five NGS gardens and group openings, there are more recently established gardens to stimulate our brains with fresh ideas of design and plantsmanship. Impossible to decide!

Having said that, for anyone who loves trees, there is one ten-acre garden that has stayed fresh in my mind since last April’s visit with members of Lincolnshire Gardens Trust. Ashfield House in Branston, a HE Grade II listed farmhouse, dates to the early nineteenth century, when the trend was for gentlemen farmers to create idealistic natural views like the designed parklands of the nobility. It seems likely given local archaeological evidence that there was earlier Roman and medieval habitation in the shallow limestone valley west of Branston village. At some stage, in the Victorian era, a freshwater spring had been dammed to create a lake with a sluice and hydraulic ram at the east end.

By the early 1907 Ordnance Survey, mixed shelterbelts of trees had enclosed the farmyard, house and grounds, with a glasshouse on the warm south side of the walled garden. The wider pastoral setting had become a pleasure ground under a sprinkling of select deciduous trees in key locations, with increasingly popular imported conifers, designed to frame views across the water in the picturesque, naturalistic style.

Given ‘growing’ space, these ‘eyecatchers’ eventually married the house, lawns and circuit walks into the surrounding landscape and are now grown into magnificent veterans. One or two featuring near the lake appear to have been originally planted as bundles. Bundle planting of several saplings of the same taxonomy was a common Victorian practice. As they grew, their trunks fused at the base, sometimes resembling a low pollard or coppice stool. One stately beech has a romantic rope-swing hanging from an extended branch. Look closely at the trunk to find a ring encircling the base of the tree, evidence that a graft was made on a different root stock. Nineteenth-century gardeners and nurserymen experimented with inventive forestry techniques.

Current owners John and Judi Tinsley have successfully invested in and added their own designed layer to the landscape. The last decade of the old millennium and the beginning of the new era have seen them establish and develop a contemporary arboretum. Now visitors who wander by the lake will come upon nodding, purple-chequered snakes head fritillaries interspersed randomly with graceful white fritillaries massed under groves of river birch, Betula nigra, named for their dark, almost black peeling bark. These silhouettes make a stark contrast to dense evergreen groves of species fir trees. Here and there species dogwoods add to the palette, including the equally striking Cornus ‘Midwinter Fire’ and Cornus controversa.

An attractive collection of special magnolia trees at the far end of the water tempts one to venture even further out, their great white blooms fluttering like doves. I felt energised by the sight of the dazzling, starry and tulip-shaped blooms, here and there blushed with pink. One gorgeous specimen was beginning to bloom, Magnolia ‘Susan’ I believe; a surprising, rich magenta purple.

Finally, I re-traced my steps towards the house and stepped into the orchard, a memorable, breathtaking moment. Here an amazing 110 cherry trees of forty different varieties were awash with brilliant white and sugar pink blossom. Each polished tree trunk was flecked and decked with vivid yellow lichen and the surrounding grass garlanded by celebratory circles of pure white narcissi. The whole effect in the spring sunshine was dazzlingly luminous.

I came away with unanswered questions… for instance, the name of the owner who first built the house or the names of any gardeners who worked there. When was the old glasshouse installed and when was it taken down? Could they have built a mount with the spoil when they dug out the lake? I read that in 1963 limestone, engraved with a memorial inscription, perhaps originally marking a young Roman girl’s grave, was found near Folly Lane, which skirts the boundary of the Ashfield House acres. The road name makes me wonder, was there once a folly in the view? I am hoping readers might know some answers. Do send me old photographs and/or details about any stories connected to these gardens.

Whatever the garden you potter in, or the open garden you choose to vote for, April is a time to celebrate the arrival of spring. Dotted across garden and woodland, Nature’s rainbow posies are dominated by pristine white narcissi, wild cowslips and primroses the shade of lemon sherbet sweets. Make the most of this season’s fleeting pleasures, the uplifting sensations of bright, light colours and fragrance. Get out and about with your family and friends to explore new landscapes. Revel in the heady blossom above, waving in gentle breezes, with promises of bowls of cherries to come.