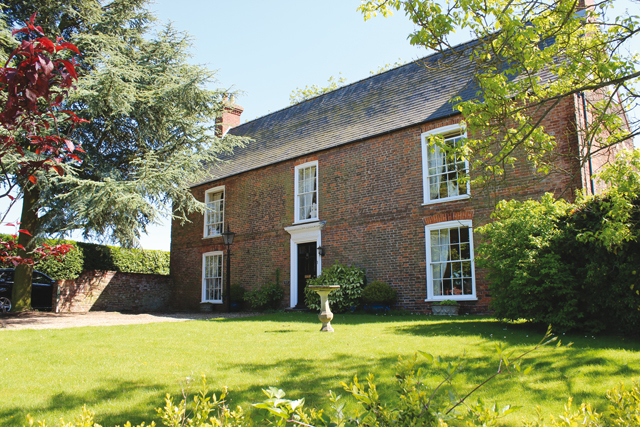 When Robin Seymour and his wife Tessa bought Partney House, they thought it would be their forever home.
The couple, who had lived in Dorking in Surrey for thirty-five years, had followed their hearts to Lincolnshire after their daughter Emma moved to the county with her partner Matt and four children, Archie (now 13), Cassius (12), Finnegan (9) and Daisy (7).

Emma and Matt, who is originally from Spalding, had bought an old granary to renovate in Great Steeping, near Spilsby, and their progress was featured on the TV programme Build a New Life in the Country.

Missing their grandchildren terribly, Robin and Tessa sold their home, a rambling medieval Grade II* listed house, and moved into a rented bungalow in Spilsby for a year before finding their current home.

“We initially rented the bungalow for six months thinking it would be ample time to find the right house for us but it wasn’t,” said Robin. “Maybe we are too discerning but we were looking for a house with a bit of character and they are few and far between.”

By chance, Matt drove through the village of Partney, near Spilsby, spotted Partney House from the roadside and mentioned it to Robin and Tessa.

“We booked a viewing and Tessa immediately fell in love with the house,” said Robin. “I’m a bit more reserved. Whereas Tessa has an eye for design and can ‘see through’ things, I was thinking ‘how are we going to heat this place?’

“However we both liked the fact that it was an imposing house. It was built in 1612 and subsequently its quirky Georgian features, such as large windows, wood panelling, wooden floors and original fireplaces, were immediately appealing.”

The couple made an offer on the house, which was accepted, and two months later, in November 2006 they moved in.

“The house was shabby,” explained Robin. “I’m not quite sure how the previous owner had lived there, as the kitchen only had one plug socket in it. It needed a bit of love and renovating to bring it up to date.”

Having lived in a Grade II* listed property previously, the couple decided not to bother with a survey on their new home. Once the renovation work began, however, they realised it needed a lot more work than they’d expected.

Robin, a retired travel agent who once owned the Charter Flight Centre in London’s Victoria area, said: “In true Lincolnshire fashion, the ground floor was laid on earth and so we had the entire ground floor dug out, concreted and damp proofed which was a major job because it had to be done by hand.”

The house was then rewired, replumbed, had a new kitchen designed and installed by Peter Jackson Cabinet Makers Ltd of Horncastle and a new bathroom and two en-suite bathrooms.

“It took six months to complete the work and we lived in brick dust and rubble the whole time,” said Robin. “We were under the impression we would be here forever so we had the work done to a very high standard.”

Once the house was complete, Tessa, who owned a chain of three fashion boutiques in the 1960s called Lynette Claire in London’s Knightsbridge and on Kensington High Street, used her years of design and fashion experience to add the finishing touches.

“Tessa didn’t have a particular plan for the house, she simply let the house lead the design,” said Robin. “It is decorated in Farrow and Ball colours and everyone who visits the house loves the style.

“We spend most of our life in the kitchen or one of the two lounges where we like to watch television and read, or in the study area which is filled with books and paraphernalia for the cars.”

Then a new four-car garage was built in the grounds of the house to store Robin and his son Jonathan’s classic car collection. Jonathan, who has worked in Singapore as a shares trader for the last eleven years, visits several times a year to indulge their shared interest in classic cars. Jonathan, who is married to Riann and has a home in Provence in the South of France, also visited the Monaco Grand Prix and Historic Grand Prix this year.

A keen gardener, Tessa threw herself into the gardens which are particularly safe for children and dogs as they are enclosed with a large wall on three sides. Robin admits that although he used to pitch in by cutting the grass, he is now quite happy to let a local gardener do it.

With four grandchildren frequently visiting, Partney House and its gardens have been filled with noise and laughter for several years.

Two years ago, Matt found that his business installing home cinema and high-end sound systems into people’s homes had become very busy, with the majority of customers being in the London area and the south generally. It meant he was spending too much time travelling between London and Lincolnshire and so the family took the decision to move to Ascot in Berkshire.

Now, missing their grandchildren once again, Robin and Tessa have decided to follow their hearts and relocate to be near their family. They have placed Partney House on the market.

“We love the house and it is in a very nice, quiet area with good neighbours, but we don’t like being here without our family,” said Tessa.

Robin added: “We stuck a compass in the map and have decided to move 10 to 15 miles away from Emma and Matt. We do visit them every three or four weeks but it is a
four-hour journey down the A16, which I hate, and then round the M25.

“We’ve been looking on and off for six to eight months because our son has generously offered to fund a house for us if we find one, until we can sell our home. We’re really looking forward to living near our family again.”