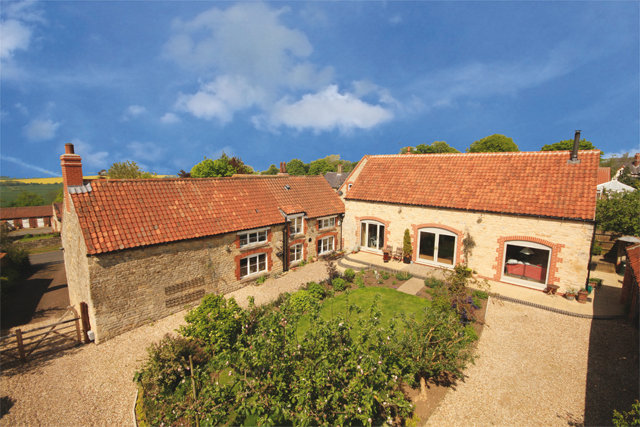 Commanding views over the Trent Valley made the Village Farm House at Boothby Graffoe a dream home for its current owner.
Despite its run down condition, Dr Peter Dawson knew the potential in the stone period former farmhouse and it only took a little stretch of the imagination to see him living there.

He said: “We fell in love with the house because of its position and its stunning views over the Trent Valley. We realised it needed a lot of work, unfortunately we didn’t realise the scale of the work required.”

The retired GP had practised at the Swineshead Medical Group near Boston for over thirty years, after moving to the area in 1978 with his late wife, Jane and their three children. Sadly Jane passed away six years ago.

After meeting his partner a few years later, the couple purchased the Village Farm House in January 2009.

At the time, the property consisted of a main house, an attached granary and a cart shed and the building work – which was carried out by builder Paul Preston from Aisby, near Grantham with joinery by Steve Horstwood from Sleaford – began on the main house first.

Peter said: “We thought the main house and cart shed just needed cosmetic improvements but the work was much more than anticipated.

“First the main house was very damp; the back and side walls had to be tanked and another wall had to be stabilised. Then during the course of the work, one of the ceilings came down and had to be rebuilt and replastered. Suddenly a substantial amount of work had to be done which delayed us moving in.”

On top of the structural work in the main house, a small box room was turned into a shower room, the drains and gutters were fixed and then the building was rewired, replumbed and replastered. A new kitchen and bathroom were also installed before the couple could finally move in at the end of July 2009 with their dog Lottie, a border collie, and cat Gus.

Peter said: “When we moved in, we started work on the granary which we knew would be a problem because it had previously been used as a workshop and the roof was in a poor state.

“One wall had to come down completely and we created a cavity to insulate it; then the building was completely reroofed using green oak because the ends of the rafters had gone rotten. We made a guest bedroom on a mezzanine floor above the granary and installed under-floor heating, a new oak floor and new large double glazed thermally efficient windows.”

Peter admits his partner has a “real talent for soft furnishings and colour” and the entire house was decorated in soothing paint tones from Farrow and Ball and Fired Earth.

All the work was completed at the beginning of 2011 and after Peter retired in April that year, the couple threw a party for over eighty of their friends and family.

“It is a very good sociable house and perfect for entertaining guests, especially as there are two outdoor eating areas contained within the gardens,” said Peter.

Now the house is a testimony to the couple’s hard work. The old granary is now the bright and airy principal reception room with a cast iron wood burner, under-floor heating to the solid wood floor and huge French doors designed and manufactured by George Barnsdale of Donington, near Spalding.

The ceiling is vaulted with exposed beams and truss work and the stone walls have been left unplastered to add to the character of the property. There are stairs in this room leading to a Minstrel gallery.

Three further reception rooms on the ground floor are currently used as a dining room, lounge and study and two of these have cast iron wood burners in fireplaces with wooden mantels. The farmhouse kitchen has room for a table and a Rangemaster stove, integrated appliances, a pantry cupboard and an original tiled floor, while the utility room has space for a washing machine and tumble dryer. There is also a downstairs cloakroom.

Upstairs, the guest bedroom is a lovely room with a cast iron fireplace, an integral window with shutters, exposed beams, a vaulted ceiling, a Velux roof window and an en suite shower room.

The master bedroom has a cast iron fireplace and there are two further bedrooms. The main bathroom benefits from a bath, large walk-in shower and a linen cupboard and there is also a separate shower room on this floor.

Outside, a brick block driveway leads to the side of the property and the front garden is mainly laid to lawn with herbaceous borders, shrubs and stone wall and fenced boundaries. At the rear there is a four bay stone and pantile open bay garaging block, which was the original farm cart shed, and a lawned garden with a planting area. The raised patio area and inner courtyard are good for entertaining.

“It really is a fabulous place to live as it has wonderful views,” Peter said. “You can go for walks on the Viking Way, the village of Navenby, with its doctors’ surgery and shops, is less than a mile away and Coleby, with its fine dining establishment, is just down the road.”

Although the couple have enjoyed their time in the house, they now want to live closer to their respective families and so the house has been placed on the market. Peter said: “My partner’s family live in the south of England and my daughter lives in the north so we have decided to move to a place equidistant between the two.”