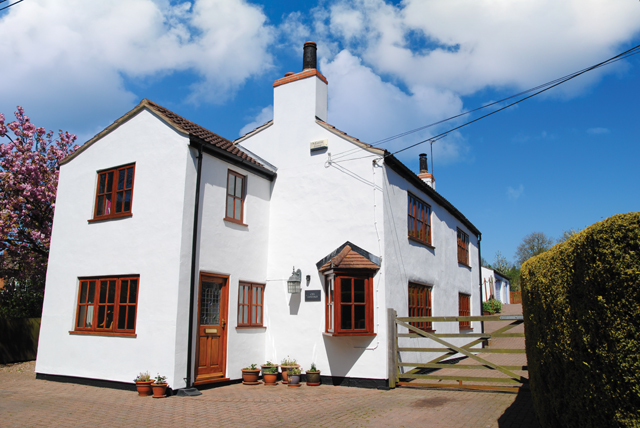 A cottage in the Wolds

When the Graingers decided they wanted a taste of rural life in a small village, they chose Grasby on the southern edge of the Lincolnshire Wolds.
The couple had lived in Barrow upon Humber, near to the Humber Bridge, for twenty years but they were finding that the village was getting larger and no longer had the ‘villagey’ feel they wanted.

Picturesque Grasby, six miles from Brigg and three miles from Caistor, met all their needs as it was small with only around 400 people, was within commuting distance of work and within the catchment area for the highest ranking secondary school in the county, Caistor Grammar School, for their two daughters.

The village lies in the Wolds in an Area of Outstanding Natural Beauty and has a primary school, pub, church and village hall. The nearby market towns of Caistor and Brigg have a range of shops, post offices, restaurants and bars, doctors’ surgeries and schools.

There is good access to the motorway network from the village providing easy access to Scunthorpe, Grimsby and Hull. Humberside International Airport is just five miles away and Lincoln is a twenty-seven-mile drive.

The couple remember falling in love with their home, a pretty cottage at the end of Vicarage Lane, on their first viewing five years ago.

Built in 1860, the cottage is one of the oldest in the village and was once a Toll Cottage for driving cattle. At one point, an ancient footpath ran between the cottage and the property next door, leading to a well which the villagers used.

When they purchased the then-five bedroomed cottage in September 2011, it was in a good state of repair although needed some work to ensure its ongoing maintenance. They installed a new downstairs shower room and decorated throughout with new carpets and curtains.

A few months after they moved in, the couple knocked two small bedrooms at the rear of the house into one large guest bedroom. Although not separate from the house, the new bedroom is a private area ideal for visiting family or teenage children, as it utilises the second staircase in the property which leads to the downstairs bathroom and on to the kitchen.

The cottage, which has retained many original features including beamed ceilings and ledged and braced doors, now offers a dining room, sitting room, lounge, kitchen and shower room to the ground floor with four bedrooms and a family bathroom upstairs.

Particular features of the house include a log burning stove in a brick surround with timber mantel in the sitting room, and an open fire in a brick surround with a timber mantel in the dining room. The kitchen features a range of high and low level cupboards and drawer units with wine racking, basket storage and granite work surfaces. There is a ‘Leisure’ range cooker and integrated Neff dishwasher and fridge.

The cottage’s previous owner was a herbalist who had had the garden landscaped and filled it with herbs and other plants.

The cottage is approached via a block paved driveway, which leads through a timber entrance gate, along the front of the cottage to a double garage/workshop with up and over door. A pathway meanders up the garden, which is filled with sweeping beds of perennial plants, shrubs and mature fruit trees including apple, pear, plum and cobnut. There are grassed areas, a timber summer house and views of the surrounding countryside.

Being on the edge of the Viking Way – a 147 mile walk from the Humber Bridge to Oakham in Rutland – the family often go on long walks with their dog.

From the property it is possible to walk on the Viking Way and around the farmers’ fields on permissive footpaths, where an abundance of wildlife can be seen including peregrine falcons, buzzards, owls and pheasants.