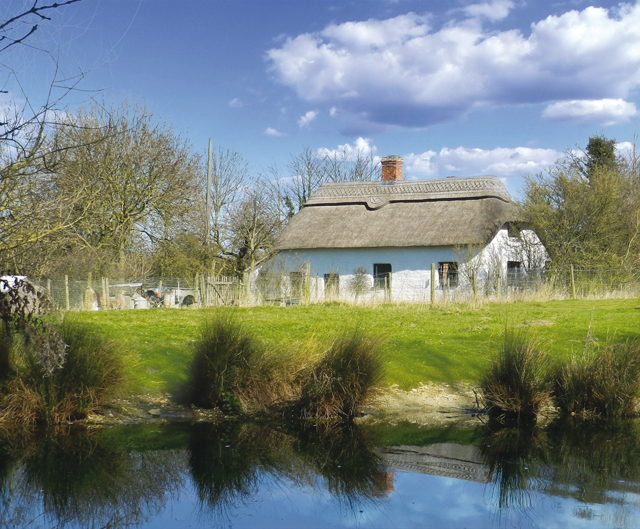 A cottage of great character

The Grade II listed Field Cottage at Moorby, near Horncastle was in a dilapidated condition when Mike Sumner decided to take it under his wing.
For years the traditional mud and stud thatched property had been neglected and the little repair work that had been carried out was out of keeping with the character of the building. In fact, by the time Mike found the house in 1993, it was about to be placed on the Buildings at Risk Register.

But Mike, who had been living in a small mud and stud cottage at South Elkington, near Louth, since 1979, was not concerned by the work. He said: “The cottage was in a fantastic setting off the road with fields all around it so the fact that it was in a poor condition didn’t bother me at all. At the time, I just wanted enough room to raise some poultry and plant some trees.”

After being tipped off that the property was going to be placed on the market, Mike approached the estate agents, viewed the house and put in an offer which was accepted.

Even before the deal was completed in July 1993, he had been given the keys by the vendor and had begun the long process of making the house his home.

Mike, who lives with his partner, Kelly who is an accounts assistant, said: “The owner was an elderly gentleman and the last of a local farming family. He had inherited quite a lot of land and lived very frugally in the mud and stud cottage known as White House Farm, now the ostrich farm, across the road. When he died two years later, he left everything to the Salvation Army.”

Still living at South Elkington and working alternate weeks as a tree officer for the London Borough of Kensington and Chelsea, Mike rolled up his sleeves and spent weekends and every other week repairing the building. Kelly, who was living in Grimsby, provided weekend labour.

Mike removed brick, block and concrete from the walls and repaired the structure using traditional materials in keeping with the building. He repaired the timber frame where necessary, replaced unsound and missing laths and repaired the roof. He said: “Once the timber frame repairs were done and the laths were replaced, clay from the original walls was reconstituted and added to fresh clay dug from the site. This was mixed with barley straw and daubed onto the laths in the traditional way. ”

The interior rooms – which would have been fairly open plan when the cottage was built between 1774 and 1800 – had been partitioned in the 1830s into several small rooms that were too low to stand up in. Mike worked with historical buildings architect, Mary Kerr to design a restoration scheme to submit for listed building consent, which removed these additions and restored the original layout. This resulted in a dramatic 20ft x 12ft room with a 12ft high vaulted ceiling that became the dining kitchen, one large bedroom upstairs, another room below it and two smaller rooms.

Once the structural work was finished, Mike commissioned thatcher, Andrew Bramley from Thimbleby to put a long straw thatched roof on the building, which he completed in July 1995.

Mike moved into his new home in January 1996, when his South Elkington property sold, and work then began on extending Field Cottage. The work, which was carried out by local tradesmen, added a living room, two bedrooms, a bathroom, utility room and entrance hall joined to the mud and stud cottage by a small link and was completed in 1997.

The finished house is brimming with character features including exposed ceiling and wall beams, Yorkshire sliding sash windows, York flagstone floors, nine-inch-wide pine floorboards and several multi-fuel burners including one in an inglenook fireplace. It is set back along a long private driveway with no near neighbours.

Soon Mike had left his London job to concentrate on his tree consultancy business, which he runs from home. He works with architects to carry out tree surveys for developments close to trees, carries out tree reports for house purchasers for mortgage and insurance purposes, does safety and risk assessment on trees in public open spaces and gives advice on protected trees, tree care, maintenance and planting.

Once Mike and Kelly were settled into their new home, Mike took up his hobby of breeding, showing and conserving rare breed domestic poultry and waterfowl. He said: “The first birds I got were two white turkeys that Andre Tomlin at the ostrich farm rescued from a farm in Wales. They were called Pinky and Perky and they started my hobby.

“After that I bred bronze turkeys and Lincolnshire Buff poultry. Kelly and I went to our first show at Revesby in August 1997 with a pullet called Jessie and won the award for the best current year Lincolnshire Buff.”

Later, Mike progressed to breeding African and Toulouse geese and various other colours of turkeys. He is now working towards reintroducing a standard version of the turkey known as the Crimson Dawn or Black Winged Bronze, which is currently extinct in the UK.

With 2.67 acres of land, Mike was also able to plant some of the young trees which he had grown from seed. Now the garden and fields around the cottage are home to twenty-two species of rare and unusual specimen trees, including giant redwoods.

Swamp cypress and dawn redwood, both lovers of wet areas, are growing in one of the three natural ponds adjacent to the beck, which runs along the boundary of the property. There are also several walnut trees and unusual varieties of apple trees including the Lincolnshire variety Bolingbrook Beauty.

“My father was a woodwork teacher at Tollbar Academy, New Waltham, Grimsby, and knew a lot about trees,” said Mike. “I picked up my interest in trees and my love of nature from him.”

Mike and Kelly are certainly surrounded by nature at Field Cottage. Mike said: “A pair of barn owls that nest in a barn up the road are always quartering the fields on either side of us. We also see buzzards and red kites regularly.

“We get a good selection of wild birds on the feeders, including blue, great and coal tits, goldfinches and house and tree sparrows.”

In fact, Mike and Kelly are so passionate about trees and nature that in May last year they bought a property with eight acres of woodland and wooded gardens in the Lincolnshire Limewoods between Bardney and Wragby. With the prospect of building a new home in a dream setting on the horizon, Mike and Kelly have put Field Cottage on the market.

“This has been a great place to live for the last twenty years and if we hadn’t found our woodland, we wouldn’t be moving,” said Mike. “But the wood is a dream come true and we look forward to the day we move into our new home.”