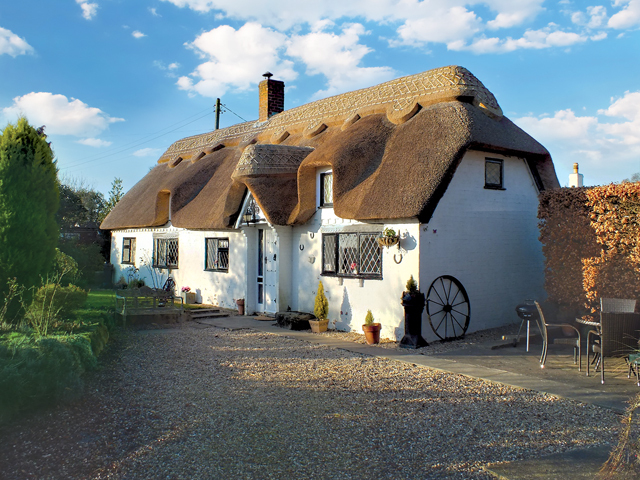 A cottage to fall in love with

It is a chocolate box pretty, warm and cosy home which inspired love at first sight for its owner Eileen McGregor.
In fact her love affair with The Thatched Cottage at Thimbleby, near Horncastle, has never waned in all the time she has owned it.

Eileen said: “We used to drive home and as soon as I got through the gate I’d want to put my arms around the cottage and cuddle it.

“It’s a very tranquil cosy house with a great deal of warmth in a lovely village community.”

Eileen, who is a former teacher and Ofsted inspector and now works as an educational consultant, bought the cottage with her late husband, Paul Kelly as an ‘impulse buy’ in 1986. At the time, the couple were living in Germany where Paul was based as an officer in the Royal Artillery.

Eileen said: “We were visiting my sister and her husband, who was based in Lincolnshire with the RAF. We happened to be having a coffee in Woodhall Spa when my sister’s friend came in with the brochure for the cottage.

“It had only gone on the market that morning and out of sheer nosiness, Paul and I drove round to have a look at it.

“We had wanted to get onto the property ladder in Britain but weren’t actively looking at the time. But the cottage was beautiful, just like a chocolate box cover, and we fell in love with it immediately.”

The couple asked the owners if they could take a look around and then returned the following afternoon for a formal viewing, with the intention of buying the cottage.

For the first year, they rented the cottage out, but when Paul was posted to Kirton Lindsey in 1987 they moved in and Eileen took up a teaching post in Lincolnshire.

Three years later, when Paul was stationed to Woolwich and then Liverpool, they kept the cottage as their country retreat.

“We had quarters wherever Paul was stationed but we always kept the cottage as our bolthole,” Eileen said. “We used to drive up to Lincolnshire on Friday nights and go on Monday mornings, feeling like we’d had a week’s holiday.

“A lot of our friends from London would borrow the cottage and many fell in love with the county and moved to Lincolnshire as a result.”

She added: “One of my friends was recovering from an illness and being in the cottage gave her a lot of contentment.”

Eileen has been particularly touched by the sense of community in the village. She said: “There is a lovely, quiet sense of community in Thimbleby. When Paul was sent to the Gulf War in 1991, I’d not been well and for the first week every night I returned to the cottage, someone had left me a cooked meal on the doorstep. To this day, I don’t know who it was.”

Sadly, Paul passed away in 1997 and Eileen moved back into the cottage the following year. She opened Fleur de Lys, a florist in Woodhall Spa that year, running it successfully for five years until she sold the business (it is still trading in the town).

Eileen met her second husband, John McGregor and the couple moved to a former pub in Moorby between Boston and Horncastle in 2004 and married in Thimbleby’s St Margaret’s Church three years ago.

For some years, the cottage has been rented out as a holiday home and weekend retreat with a national holiday home letting agency.

“The company use a picture of the cottage for their adverts so it has been featured in the Telegraph and other national newspapers,” Eileen added.

With her life now in Moorby, Eileen decided to put the house up for sale and has recently invested in a new thatched roof, which was completed in December last year by local thatcher Andrew Bramley.

Eileen said: “The ridge needed redoing and the north side was looking worse for wear, so we discussed it at length with the thatcher. He told us the rest of the thatch would need doing in eight to ten years’ time so we decided to have the entire roof re-thatched.

“It has taken over a year to complete and it’s beautifully done. The new thatch will now last for well over thirty years, so it’s a good investment.”

Mr Bramley, who also lives in Thimbleby and is currently working on re-thatching The Manor House in the village, said the cottage was re-thatched using Scottish water reed.

He added: “We completely stripped off the roof of The Thatched Cottage down to the rafters and started again.

“It should have taken six months but it took much longer because we lost a bit of time with the snow.”

The new thatch will make the cottage warm in winter and cool in summer and is an attractive addition to the seventeenth-century building. The three-bedroomed cottage is full of original features including exposed ceiling beams, original tiled floors, leaded and stained glass windows and Art Nouveau-styled interior doors.

The front door is a traditional hardwood and batten cottage door which features ornate brackets and door knocker and there is a decorative cast iron feature bracket with coach light above it. Downstairs, there is a third bedroom which could also be used as a dining room, a galley-style kitchen and a sitting room with a feature fireplace with marble hearth, ornate mirrors and a cast iron grate and flue and a separate cupboard featuring doors from a church. There is also a downstairs bathroom.

A stairway rises from the rear hallway onto a landing with bespoke landing rails and a leaded window inset to the eaves. There are two bedrooms upstairs, both with sloping ceilings and windows in the eaves.

Outside, the cottage is approached via a gravel driveway, with space for two cars and a double garage. There is a pretty cottage garden to the front with a lawn, well-kept mature shrubs and trees and views of open countryside beyond. There is a patio area to the side of the cottage, with a pathway leading around the side of the house to a lawned rear garden.

Eileen, who is a founder member of the Army Widows Association, said: “I will cry my eyes out when it is sold but I’ve moved on and I want to give someone else the pleasure of owning it.”

• The Thatched Cottage at Chapel Lane, Thimbleby, near Horncastle, is on the market with Robert Bell and Co in Horncastle for £237,500. For more information phone the estate agents on (01507) 522222.