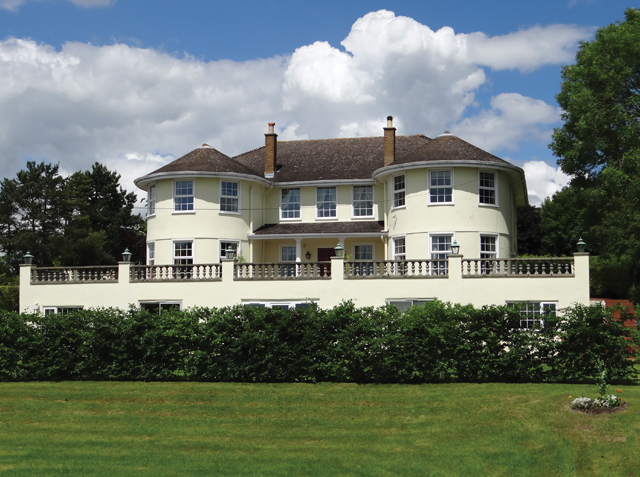 A family home of sunsets and seclusion

When Christopher Baker and his wife Asa viewed The Mount in Grasby, near Caistor, it took more than a little imagination to see what the abandoned building could become.
The house, which had been repossessed by the banks three years previously, had been used as a weekend party pad by its previous owners who lived in London during the week.

Since abandoning the property, it had been vandalised and burgled, leaving it stripped of most of its fixtures and fittings, even down to the lights and door handles. Electric wiring and cobwebs hung from every ceiling, a fireplace and even the bath had been removed and the overgrown garden looked terribly unloved.

Asa spotted the property when it was advertised in the local newspaper and after picking up a brochure from the estate agents in Brigg, she and her husband viewed the place that afternoon.

At the viewing, Mr Baker could see the house’s potential, even though his wife wasn’t so sure. “I had the feeling that the house was going to make a really great family home,” said Mr Baker. “But my wife was somewhat reluctant to agree with me because it was in such a neglected state.

“She needed a little persuading that a few coats of paint, some fittings and new carpets would transform it into our home.”

At the time the couple lived in a four-bedroom house in Scawby, near Brigg, and had decided to find a larger property as they have seven children (now aged between 33 and 50) between them from their previous marriages. Three of their children were then living at home and the others would often come to stay.

Although now both retired, Mr Baker was the director of Horberry and Baker Ltd of Haxey, seed potato merchants supplying seed to farms and developing new varieties of potato, and Asa was a secretary within the company.

The couple put in an offer in March 1992 which was quickly accepted by the bank. It would be a further four months before the purchase was complete and then the couple brought in a team of builders to make some changes to the property before they moved in.

An electrician replaced all the damaged light fittings; the fireplace in the family room was replaced with a new surround and a wood burning stove; the boarded up French doors into the garden were replaced; new carpets were fitted and several rooms were redecorated.

The overgrown garden, which is 1.7 acres, was also tackled at this stage with the lawn trimmed, a large leylandii hedge tamed and the rear paddock maintained. There is stabling in front of the paddock for horses, a kitchen garden and productive orchard.

Mr Baker is particularly fond of the bee orchids which grow in the paddock. “Bee orchids are not particularly rare, as they grow on chalk soil on the Lincolnshire Wolds, which we stand on the edge of, and are found on established pasture of which there isn’t much left,” said Mr Baker. “But there is quite a population of bee orchids in the paddock.”

Once they moved into the house in September that year, the couple were treated to stunning views from the front of the house and beautiful sunsets too. “This is such a lovely house to live in,” said Mr Baker. “We have really enjoyed our time here, particularly the views, which all our friends comment on, as we sit on a hill and can see Lincoln Cathedral on a clear day.

“We wake to the sun rising in the east, follow it all day as it passes round the house and are treated to beautiful sunsets in the west.”

He added: “The house is totally private; although we have neighbours, we don’t see them unless we want to.”

Seven years after the couple moved in, they embarked on the second phase of the renovation project, starting when a timeless oak kitchen was installed and bedroom five was turned into the family bathroom whilst the old bathroom became bedroom five.

“Bedroom five was originally much smaller than the bathroom so we swapped them over to have a good sized bathroom and a better sized bedroom,” said Mr Baker.

A year later, a double garage was built at the rear of the house and the roof was insulated and cavity wall insulation was installed. An ongoing job was to replace over forty wooden windows in the house with double glazed units. “When we first moved into the house, our heating bills were astronomical!” said Mr Baker. “Once we had replaced the windows and installed insulation, it was much more reasonable.”

Next the annexe, which sits under a terrace at the front of the house, was renovated. Originally split into two little flats, the couple decided to remove a dividing wall, creating a huge ten-metre room.

“I remember several barbecues when we would retreat into the annexe when it rained,” added Mr Baker. “When the children were small, it made a great play and party room and now our grandchildren love to play there too.”

Now the couple, who have eleven grandchildren between them – three in Lincolnshire, three in North Yorkshire and five in Spain – have decided the house is too large for their needs and have placed it on the market. Once it is sold, they intend to move into a smaller property they already own in Brigg.