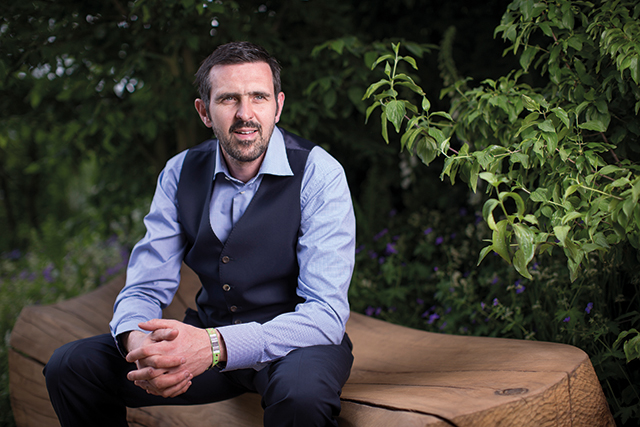 A garden school on home turf

Steffie Shields explores TV garden designer Adam Frost’s ‘edible garden’.
Avid BBC2 Gardeners’ World fans who have witnessed Adam Frost’s recent contributions will have found his ‘down to earth’ enthusiasm for gardening disarming. We look forward to regular updates on how he is tackling improving designs for his new ‘patch’, since moving recently to a quiet, quintessential English stone village dating back to the Domesday Book.

Invitations to visit a high-profile designer’s private domain are rare. I drove to Barnack, three miles south of Stamford, with keen anticipation, only to find an embryonic Eden without its Adam. He had been called away on urgent business. Always in demand, on the road, rushing between meetings, Adam must focus on attending to clients’ needs. However, feeling like earlier garden tourists, arriving to find the self-effacing owner away in town, I appreciated that he had asked his gardener Mike to show me around. Having researched the pressured, peripatetic business of landscape gardener ‘Capability’ Brown, I understood completely.

Coincidentally, Adam’s elegant Grade II listed house dates from the eighteenth century. It is built from local Barnack stone with a steep Collyweston-tiled roof, the same materials that Brown employed in restoring nearby Burghley House. Five acres create ideal outdoor space for his family, and include walled garden, orchard, a small woodland and a pasture, with room for a plant nursery and trials area for his expanding design practice. Also, as an active RHS ambassador and patron of the Greenfingers Charity, Adam could at last commit to a long-held ambition to establish a garden school.

Adam tweets happily about Mrs Frost’s wonderful quince jelly. Perhaps it stirs the memories as well as the taste buds. He was born in Harlow, Essex, and loved spending time on his grandparents’ allotment, before moving with his parents to North Devon. In the mid-1980s, he embarked on an apprenticeship at the North Devon Parks Department, and later transferred to Rutland to work alongside the late, great Geoff Hamilton, TV’s gardening guru. As Stowe was for Brown, Barnsdale Gardens were a special academy, a practical, learning curve helping to construct many of the 38 remarkable show gardens. Settling down in the Stamford area, he then set up his own practice, and enjoyed collaborating with David Stevens, an international garden designer who he greatly admires. Now, with a string of seven hard-won RHS Chelsea Gold medals to his name, Adam too is sought after – designing special outdoor spaces worldwide, including hospice gardens, that work best for the people who are going to use them.

His vision is to pass on his passion for gardening by sharing his experience and knowledge, with “hands in amongst the plants” training in his new private garden. Wasting no time, by March 2017, a speedy refurbishment of an outbuilding led to the comfortable, purpose-built Adam Frost Garden School opening its doors. All students are welcome, amateur and professional gardeners alike, for both one and two-day courses. Booking a Masterclass for a friend or relative would make a wonderful Christmas present!

When I arrived, they were hard at work in the new Vegetable Garden, not long since transformed from an overgrown, neglected walled yard. Tom, the foreman cat, sprang up to the work bench to inspect me and the work in progress: Mike, busy potting-up and sorting the glasshouse beside contemporary looking water cisterns. As expected, a plentiful variety of produce is artfully laid out with “all in view very neat”. This being ‘back-end’ mid-October, there were not the vibrant tones I remember photographing in Adam’s Land’s End garden at Barnsdale, inspired by Southwold and Cornish nautical heritage, but I spied a similar corner complete with benches and firepit for relaxed alfresco dining for the family. Mike showed me an herbaceous border in the forecourt, freshly planted up with the “Taste of the Unexpected”, soon to become a textural tapestry and sweet-smelling outdoor classroom. Everything here too, incredibly, is edible, including cardoons, curly kale and ‘society garlic’, Tulbaghia violacea, a good connecting plant, native to South Africa. Great flowering pots flank the front door; the contents, fuchsias, dahlias and canna, all fit for eating.

Like everyone who comes, I stopped to read lines from Endymion, a Keats poem, inscribed in the stone Adam has laid in the gravel before the charming Gothic gateway that lends an enduring ‘sense of place’ at the entrance to the private garden: ‘A thing of beauty is a joy for ever; Its loveliness increases, it will never pass into nothingness’ (John Keats 1795-1821). Was this, like a few other attractive features elsewhere, a remnant reminder from one of his Chelsea Gold gardens?

The south-facing lawn, bounded on the left by tall yews and a gravel walk, is edged by a single rope-laden rose pergola, with an appropriate, gorgeous David Austin rose, Rosa ‘The Generous Gardener’. A dappled woodland beyond is dominated by a feathery grove of veteran pseudo-acacias, laden with mistletoe roundels. Here, under stately conifers and intriguing old acers, Adam has laid woodchip mulch “animal trails”, winding in amongst shade-loving plants. Further on, reviving neglected old shrubs by hard coppicing, beside an ancient laburnum and ha-ha, he is clearing space for wildflowers.

A larger walled garden east, probably the kitchen garden of yesteryear, is at present grassed over. A few ranks of pointed topiary yews taking their form from two more Gothic gateways to contrast a platoon of gnarled fruit trees. South and west-facing walls, laced with old espalier pears and Clematis tangutica, will prove ideal for roses and climbing plants. Work is in progress here, two long herbaceous borders are being refreshed with Adam’s eye for year-round colour, intermingled with edible specimens yet again, such as asparagus and gooseberries.

Adam knows every garden is unique. More than making his mark, he is creating a living, much-needed legacy. As serendipitously as the self-seeding plants he loves, his students will, in turn, flourish elsewhere, inspired by the golden opportunity to experience his private space, and share in its evolution. This new garden is already as engaging as the man himself and his supervising cat Tom. At its heart, marrying it purposefully to its historic setting, Adam has added his clipped ‘line of beauty’ to the middle-distance yew hedge as eye-pleasing as a Henry Moore monolith. The view to the old church tower of St John the Baptist has been improved with a contemporary ‘designer edge’, that, just like Frost, is a tour de force.