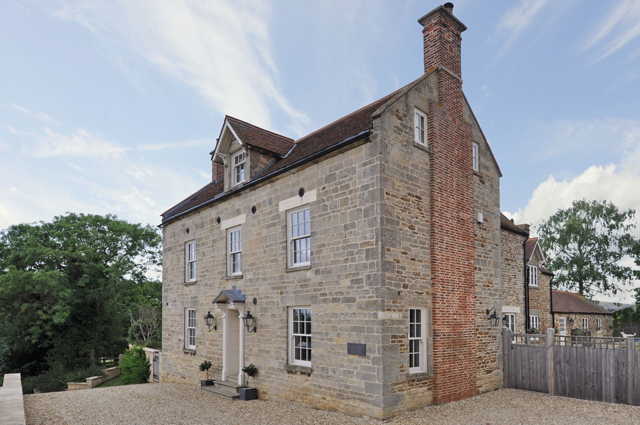 Ian and Katherine Tyler had been searching for a property to renovate for a couple of years before they spotted Eastern House at Hough on the Hill, near Grantham.
Built in 1770, the Georgian farmhouse was in need of some modernisation when the couple bought it in June 2004 and they embarked on a two-year renovation project to turn it into the stunning family home it is today.

Mr Tyler, a company director of Pumpherston Estates Ltd, a farming operation in Scotland, said: “My wife would leaf through the local papers looking at properties and for about a year we would drive out and take a peep at them with the vague idea of doing a place up.

“When we went to visit Eastern House we saw the potential in it. It was a typical working farmhouse with a boot room full of Wellington boots, a parlour with a huge kitchen table and Aga and a smaller, more modern, kitchen next door.

“It was in need of modernisation – there was a lot of damp and the plumbing and electrics were very old – but we visited during the winter and through the trees we could see these fantastic views of the Trent Valley. We thought if we knocked a wall out and built a conservatory on the back it would make a fantastic room and that was the start of our plans.”

The couple, who have two daughters, Emily (13) and Chloe (8), put their home – a cottage in the village of Harston, Lincolnshire – on the market and moved into rented accommodation at Caythorpe.

In October that year, work began on Eastern House – first the roof was made watertight and then the wallpaper was stripped off in every room. But once the wallpaper was off, it soon became clear that the original six-month renovation plan would take much longer.

Mr Tyler said: “When we peeled off the wallpaper, the original eighteenth-century plasterwork came off too because it was old and damp. It meant we could then see the footprints of the original building which had a central front door and two staircases so we went a bit mad and decided to remodel the house back to its original architecture!”

When the Tylers bought Eastern House, the front door opened onto a farmyard at the south side of the property and the original Georgian front door had been blocked in and replaced by a window. Inside, an interior wall had been removed to make the living room bigger and the original front and back staircases had been replaced, sometime in the 1970s, with a single steep central staircase.

Over the next two years, the builders embarked on a major renovation project which included new plumbing and electrics, reinstating the front door, removing the central staircase and reinstating the two original front and back staircases, replacing all the internal and external doors, replacing the windows with hardwood double-glazed units, installing nine Velux roof windows to let in light and fitting shutters to the sash windows.

The old parlour, modern stairwell and kitchen were knocked through and a new Vale Garden Houses conservatory was built at the back of the house, creating a central kitchen, dining and family room to make the most of the views of the valley which had initially inspired the Tylers.

A large bathroom on the first floor was split into a family bathroom and an en suite to the master bedroom, and a large landing on the top floor was turned into a third bathroom.

Mr Tyler said: “We had no experience of renovating houses before but luckily our builder was very helpful and I was able to visit the house most days to see what was going on.

“We were also quite lucky because the house was not listed and in renovating it we were able to use modern windows and materials whilst still ensuring the look was in keeping with the original eighteenth-century architecture.”

Once the building work was complete, a stunning Mark Wilkinson ‘Cook’s Kitchen’ with black granite work surfaces and a four-oven Aga was installed in the kitchen/family/dining room and the couple employed a decorator to paint the walls in colours chosen by Mrs Tyler (those who presume she is an interior designer are wrong: she is actually a GP!).

When the family finally moved into the house in July 2006, they took possession of a beautifully restored, seven bedroom period home with large rooms and all the benefits of modern living. The house stands in gardens of 0.6 acres which includes lawns, a vegetable patch and children’s play area, along with an adjoining paddock of around an acre.

Mr Tyler said: “We’ve really enjoyed living in the house and it’s in a fantastic village with good neighbours, lots of children for our kids to play with and good walks for the dogs. My eldest daughter loves pony riding and there are even nice stables nearby.”

Although the couple love their home, they have now decided to place it on the market. Mr Tyler added: “We have no intention of moving very far from the area because our children are settled in their schools, but we’ve got itchy feet and have decided the time is right to look for our next project.”

And with Mrs Tyler mentioning building a house this time, it’s sure to be an interesting next move!

• Eastern House is on the market with Chesterton Humberts in Grantham for £1.25 million. For more information contact the estate agents on (01476) 514514.