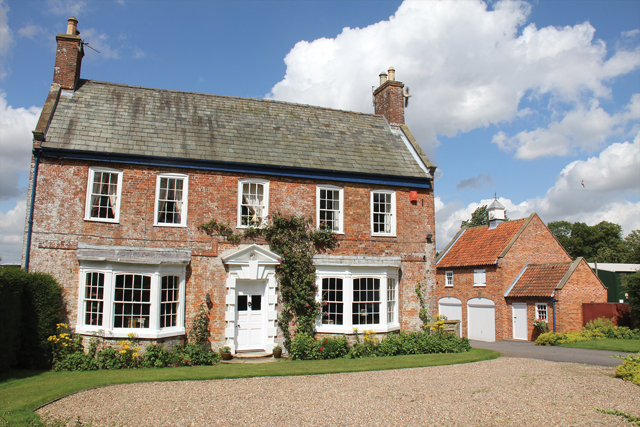 A Georgian haven in the Wolds

Living in the South East London suburb of East Dulwich with their young children, Matthew and Marisa Rose longed for a move to the country.
For them, Lincolnshire with its beautiful countryside, picturesque villages and old fashioned family values was the dream location.

Marisa, who works in audio publishing, said: “East Dulwich is lovely but simply being in a city meant that local crime rates were high and we didn’t want to bring our boys up there.

“The Lincolnshire Wolds are quite nationally renowned as a beautiful area and in terms of topography, it’s similar to the central France region of Limousin where we also have a little place. We loved the beautiful countryside, pretty market towns and lifestyle it offered.”

With friends already living in the county, they had plenty of opportunities to explore their ideal location. In fact, they had already picked out not just the location but the exact house they wanted to be their ‘forever’ home.

They had spotted The Grange at West Ashby, two-and-a-half miles from the market town of Horncastle, in the local newspaper whilst visiting friends and had been terribly disappointed when it was ‘Sold Subject to Contract’ soon afterwards.

The picturesque Grade II listed Georgian farmhouse with fine original staircase and panelling in the principal rooms was set in an enviable secluded site of approximately three acres. Located in the Lincolnshire Wolds in a designated Area of Outstanding Natural Beauty and within the catchment area of several ‘outstanding’ Ofsted rated primary schools and grammar schools, the house was highly sought after.

Marisa said: “We had seen the house come onto the market eighteen months before we were ready to move. Friends of ours knew the owners and told us that it had been the venue for many parties over the years, with more than 100 people spilling out into the gardens. They said it was a beautiful house and there was a sense of it being well known locally and part of the landscape.

“We would check the Internet for updates on the house from time to time and just by chance the sale fell through at the eleventh hour and it came back onto the market.”

With two small boys to consider (then aged one and two), Marisa and Matthew travelled from London separately to view the house in August 2009 and put in an offer within twenty-four hours.

“It just felt like coming home,” said Marisa, who at the time was 38 weeks pregnant with her daughter. “It was the perfect family home and a complete haven away from any potential risk.

“The house has retained lots of original features and it has a fantastic layout with a big farmhouse kitchen and a sitting room which is linked to the kitchen so you can watch the children playing.

“The rooms are very elegant in proportion, with light flooding through the windows, and the children can run around the house and gardens without disturbing anyone.”

Once their offer had been accepted, the couple put their London home on the market and it sold within a week.

The Grange had been owned for the previous seventeen years by Robert Bell and his wife Becky, of Robert Bell and Co estate agents, and only needed a little redecorating. The couple painted the rooms in soothing Farrow and Ball colours, in keeping with the style of the house, and renovated some of the sash windows and shutters. They also employed an architect and local builder to redesign the drawing room, which had been changed in the 1970s.

Marisa said: “At some point presumably in the ‘70s before the house was listed, someone had decided to make the drawing room more up-to-date. It meant the fireplace was the wrong shape and out of keeping with the rest of the house, so we decided to restore it to what it would have been when the house was built.”

Little is known about the house’s past. Marisa said: “It must have been built by someone with aspirations of grandeur because there are some elegant touches which are unusual in a farmhouse.

“There is a mock jib door in the dining room which looks like a priest hole but is a folly, and each of the original cast iron fireplaces have coats of arms which have different messages carved into them. The one in the master bedroom means talent, strength and love.”

On the first floor there are four bedrooms, including one which would have been the maid’s room over the kitchen, and two bathrooms. The second floor has attics extending the length of the original Georgian house, which are currently used as two bedrooms and a playroom.

Outside, a tree-lined avenue leads through the paddock up the house and the gardens, which are laid to lawn, are mainly to the south of the property. There is a thatched summerhouse with splayed Haddonstone steps leading down to the grass tennis courts.

On the south side of the house, there is a raised York stone terrace with Haddonstone balustrading and steps leading down to the lawns and to the west there is a herb garden with fruit cage and a vegetable garden.

The couple, who both work from home, have thoroughly enjoyed life at The Grange.

Marisa said: “Within a week of arriving, we had twenty friends for dinner around the dining room table, and at Matthew’s 50th birthday in September, we entertained 100 guests.

“We put straw bales around a bonfire and had musician friends playing instruments there and on the patio, which became a stage for the night. At the back of the house we put pergolas in the shade of the willow tree and brought sofas, coffee tables, hurricane lamps and candles outside in different seating areas so people could spend time playing music and chatting while the children ran around.

“We had twenty guests camping in the paddock and didn’t even notice them until they came looking for breakfast the next morning.”

The children have also benefited from the freedom and space the house offers.

Marisa said: “The house and gardens are fantastic for the children – there are no restrictions and no sense of worry about the amount of noise they make.

“It is the best house for hide and seek because there are lots of little cupboards, attic rooms and cellars. When it snows, the children spend the whole day sledging down the slope next to the tennis courts and in summer they love to swing on tyres hanging in the trees, play in the summer house and have games of croquet and football on the lawn.”

Now, however, the couple have decided to put their dream home on the market. Matthew, who ran a TV production company for ten years, has seen many changes in the industry and has decided on a change of career. He has just completed a Masters Degree in Renewable Energies and the Built Environment at the Centre for Alternative Technologies in Machynlleth, Wales and now intends to become a consultant or project leader in this specialist field.

“We are still coming to terms with our decision to sell The Grange,” said Marisa. “When we moved to Lincolnshire, we made an active decision to change our lifestyle and were looking for excellent schools, and it has really delivered. But most of the research and development into Matthew’s work is happening in the Home Counties, so sadly we will have to move.”