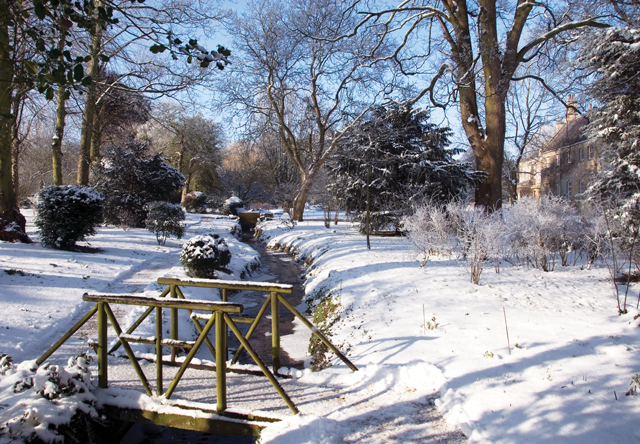 A gift that keeps on giving

Steffie Shields talks to Mrs Rosemary McCorquodale at Little Ponton Hall, south of Grantham.
‘I remember, I remember, the house where I was born, the little window where the sun came peeping in at morn…’ came back to me recently, the first poem I ever learnt, classic Wordsworth. I had been reminiscing, rekindling gardening memories with Mrs Rosemary McCorquodale, affectionately known as ‘Mrs M’ by estate staff.

Her early eighteenth-century stone house, laced with Virginia creeper, deep crimson in autumn, was probably built for a William Thorold; the splendid octagonal dovecote in the walled garden is appropriate for the Lord of the Manor. Later leased to Lord Widdrington, it is mostly Georgian, with some Victorian alterations. William Daye and Henry Pennyman were once owners, according to monuments in St Guthlac’s, an early English/late Saxon church (so disregard the renovated west gable bearing the date 1657). History does not relate which owner, possibly Christopher Turnor of Stoke Rochford, installed a whalebone arch on the approach drive (today’s Whalebone Lane) to create a theatrical, picturesque welcome. Perhaps age, or the coming of the railway, brought about its demise.

Rosemary McCorquodale, born a Turnor – a prominent Lincolnshire family – is the last of the Turnor line and is now in her late eighties. Her mother, Lady Enid Fane, a daughter of the Earl of Westmorland, was a nurse in WWI. Her father, Major Herbert Broke Turnor, served with the 17th Lancers in India, a cousin of Charles Hatton Turnor, Stoke Rochford, who previously owned Little Ponton. She remembers WWII and working for the Red Cross all over the country. Her parents’ house staff arrived mornings with empty bags and left evenings with them bulging with produce from the kitchen garden. Rationing was on, and this way the family helped to feed the entire village. In 1947 she married Alastair McCorquodale, an officer in the Coldstream Guards who sadly passed way in 2009 and is remembered as a great Olympic runner and cricketer. A striking, tall tree, Liriodendron tulipifera, in front of the hall extension, ringed with baby cyclamen, was planted to mark their silver wedding. Twenty-nine years went by before, in 2001, it flowered for the first time. Every May it bears yellow-greenish cup-shaped flowers with touches of red and orange; tulip-like, hence the common name: tulip-tree. Besides teaching patience, gardening gives great solace.

This Upper River Witham valley setting, home to many fine veteran trees – Wellingtonia, pseudoacacia, horse chestnut, walnut, beech, and purple beech – has naturally played a big part in McCorquodale family pursuits and happiness. In mid-Victorian times these Arcadian rural scenes were recorded by Reverend Charles Bethell Otley of Welby, a gifted watercolourist who coincidentally landscaped the views and orchard that I enjoy from my house – giving a little aesthetic connection with Little Ponton. Links may run deeper, judging from snowdrops, aconites and old-fashioned double narcissus, Telamonius plenus in my garden.

‘Mrs M’ brought out her early family albums, turning the pages slowly, delighting in the photographs. She told me that the great Cedar of Lebanon in the heart of the landscape gardens was once one of two, probably planted to frame views to the house, in the late eighteenth century. Despite being affected by age and storms, and recently drastically pollarded on one side, it is hoped that it will remain a feature for a while longer. The other cedar took too much light from the dining room, so her parents had it taken down. She fondly remembers great avenues of herbaceous borders and, in front of the hall, a giant, circular bed filled every summer with gay bedding plants around the obligatory sun-dial (a centrepiece sadly long since stolen). A well-kept path across the lawn once ensured that her father would not get his feet wet on the way to church. She later dispensed with this to make mowing the great lawn much easier. Of course, a large garden is a treat for children to ride bikes and model cars, to explore and to hide amongst the shrubberies, and sample fresh hazelnuts and crisp, tangy apples. A little wooden play-house made for her son and daughter has also served the proprietary imaginations and playtimes of her grandchildren, and nowadays doubtless her great-grandchildren. A tiny, wooden heart that reads ‘Home Sweet Home’ hangs on the door handle.

Garden designer Vernon Russell Smith, who was working for the Custs nearby at Belton, came over one day and suggested raising the level of the stream through the gardens to make two curvaceous lagoons – a great addition. ‘Mrs M’ told me of other changes made over time, including the river walk, taking out laurels, bringing the church border forward, and generally opening up space. She admired Mrs Jeanie Player, a formidable gardener at Ednaston Manor in Derbyshire.

She said: “She set me off on the track of shrub roses. They like to be deep-rooted – two-spade depths and masses of manure.” Mrs Player gave her one of her favourite rugosa hybrids, Rosa ‘The Hunter’; a super rose, its sprays of double flowers a rich, deep red (or hunting pink! I love the cutting now established in my garden.)

Just like the family, a garden never stops growing, and requires a great deal of thought and upkeep. Head Gardener, John Rudd, working closely with an owner who remains entirely modest about her gardening knowledge, has uplifted the gardens through his hard work, and others’ on occasion, and generous helpings of compost from a giant heap. The walled garden, where restored and well-maintained glasshouses and cold frames are in constant use, full of tender flowering exotics, has recently been further enhanced with a ‘Yellow Garden’; David Austin roses against a backdrop of trellis, interwoven with sweet-smelling Trachelospermum jasminoides, the star jasmine. Occasional revitalisation is the key, or as ‘Mrs M’ says, “You have to keep at it.”

As the days shorten and the nights by the fire lengthen, it’s time for many of us to pause from hectic chores to look back to childhood festivities, dinner parties followed by music and song. Christmas at Little Ponton is always traditional: mistletoe hanging in the hall, great log baskets by the fire, vibrant red poinsettias and bowls of fragrant hyacinths and ‘Paper White’ narcissi here and there, and arcs of berried holly gathered from the gardens placed carefully above every precious painting.

Every year ‘Mrs M’ cherishes decorating the church for the special Christmas service. She still decks the Christmas tree, brought in from the estate, doubtless pausing, as many mothers do, as she fingers old baubles, reviving memories embedded in slightly-worn trinkets.

In February Little Ponton’s pristine white snowdrop and buttercup yellow aconite carpets intermingled with hellebores, or Christmas roses, will attract visitors like bees round a honeypot; and again at Easter, with acres of nodding spring bulbs; then in June, cascading roses and clematis. Plant sales are popular, owing to Gill Rudd’s green-fingered magic with seeds, bulbs and cuttings collected from the garden and abroad. Open days have raised countless thousands of pounds for St Guthlac’s Church and many other charities including the Red Cross, Macmillan Nurses and Lincolnshire Old Churches. Thanks to tender loving attention, Mrs McCorquodale’s gardens are a gift that keeps on giving. She deserves a happy and peaceful Christmas.