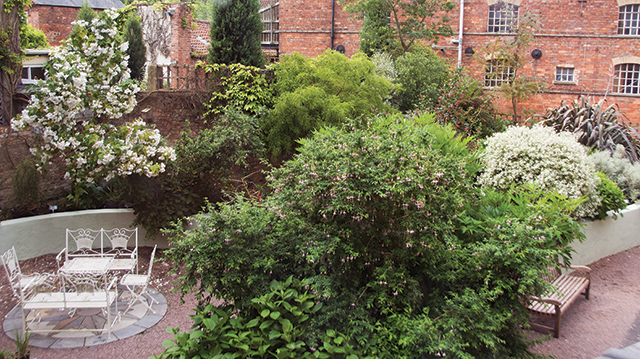 Steffie Shields marks the Joseph Banks Bicentenary 2020 by recalling a visit to the Sir Joseph Banks Society Tribute Garden in Horncastle.
The grim ‘lockdown’ (no thanks to Covid-19!) has resulted in some positive outcomes. Scientists are busy co-operating and experimenting with all manner of plant material hoping to achieve both vaccine and cure. Meanwhile, engaging, soothing virtual garden visit videos have blossomed online, together with a wide range of creative works of art, music, comedy and theatre shared by friends and colleagues, to encourage us all to keep upbeat.

Ten years ago, I remember researching for these pages a story about the making of an exotics garden in the heart of Horncastle, within striking distance of Joseph Banks’s own town house. Returning home from London in the summers he would have received local friends, neighbours and dignitaries and kept in touch with local politics and the county’s latest major agricultural and navigational improvements.

Joseph Banks (1743-1820) was not simply a wealthy local boy who achieved celebrity thanks to his Eton and Oxford education. Yes, the examples and useful connections made by both his grandfather and father, as Members of Parliament, and his inherited wealth helped forge his own more significant career. However, his success was largely thanks to his curiosity and the opportunities offered for intimate study of rich flora and fauna of the gardens, streams, pastures and woodland as explored on his home estate at Revesby. The landscape here and the surrounding fenland kindled a life-long fascination with botany.

When his self-funded travelling days to Canada, Iceland, and famously to the South Pacific with Captain Cook on Endeavour were all but a distant memory, the second half of his career proved by far the most wide-reaching, creating a long-lasting legacy. He succeeded in promoting science for the benefit of all mankind at a hugely significant time of burgeoning industry, canal-making and overseas trade. His influence and achievements spanned 42 years as scientific adviser to George III. Meanwhile, his 40-year presidency of the Royal Society led to his setting up the first school for gifted head gardeners at Chiswick, and in 1809, the founding by Royal Charter of the leading gardening charity for this ‘nation of gardeners’, the Royal Horticultural Society, the world’s first educational horticultural hub.

Rather than an aesthetic, flowering feast for the eye, Banks foresaw Kew Gardens as ‘a great exchange house’. Today, the Royal Botanic Gardens Kew, the world’s leading charitable institution for the study of scientifically and economically valuable plants and trees in everyday life, employs over 350 scientists in the discovery and identification of new species, and the impact of climate change on threatened habitats.

At the other end of the scale from the inspirational package that is Kew, the small walled enclosure off Horncastle High Street seems a mere postage stamp, no bigger than an average town garden. However, the Banks Tribute Garden, a compact, community garden is packed with a profusion of extraordinary specimens, a microcosm from hot and humid foreign worlds beyond our temperate shores.

Sometimes retracing one’s steps to re-visit a garden proves surprisingly exciting. Last summer, the committee of Lincolnshire Gardens Trust (LGT) were invited to the Sir Joseph Banks Centre Horncastle, to meet members of the Sir Joseph Banks Society and compare notes on running educational charities, and discuss planned events for the Banks Bicentenary (some sadly cancelled, owing to the coronavirus).

We also met Aidan Neary of Lincolnshire Wildlife Trust, who was on hand to explain the partnership between his Trust, the Society, Lincolnshire Naturalists’ Union, the University of Lincoln, and the Natural History Museum. Aidan is the enthusiastic project director of their significant, Heritage Lottery funded project: ‘Love Lincs Plants’. He showed us examples of fascinating fieldwork achieved mostly by volunteers, and all the local plant and wildflower collecting, pressing, as well as scanning and data inputting as part of their scientific plant identification training.

I do recommend listening to Paul Scott’s engaging and enlightening interview: https://www.joseph-banks.org.uk/paul-scott-reluctantly-discusses-love-lincs-plants/. The team aims to inspire a new generation of botanists. Note also that you can now find hundreds of images and details logged on the ‘LoveLincsPlants’ searchable database online, one element of the Lincolnshire Herbarium housed in the Sir Joseph Banks Centre to enable researchers and others to access the collection globally. Sir David Attenborough, a Sir Joseph Banks Society patron, must surely approve of such progress.

Later, we took advantage of the opportunity to see how well the Tribute Garden had matured, or indeed, considering several recent severe and wet winters, how it had survived! Former Society chairman, Lady Sally Bruce-Gardyne, who continues to volunteer her expert knowledge to conserve the planting, and Bob Wayne, the new chairman, were both on hand to enlighten us about the special plant specimens under their care.

Jean Burton was the driving force for raising enough funding for this Sir Joseph Banks Society memorial garden dedicated to the amazing botanist and explorer. It was created largely thanks to a founder member of LGT, the late Gwen Grantham (whose garden designer daughter Nikki Applewhite recently set up the G.R.O.W. charity to make gardens for Lincolnshire hospitals. The apple does not fall far from the tree! Read more details in Lincolnshire Life articles online).

The fragrance of the extravagant flowering maple, Abutilon vitifolium ‘Album’, towering in one corner pervades the courtyard. A few familiar species, including eucalyptus, hardy fuchsias, hydrangeas and New Zealand flax, are now accepted and widely spread through England’s public parks and gardens. Seeing other strange, unusual planting ‘in the flesh’ is stimulating and kindles curiosity. Many labels also bear a QR code. This enables digital-savvy phone users to summon immediate information from the Sir Joseph Banks Society’s website and database which lists all plants currently featuring in the garden with photographs alongside botanic descriptions.

Amusing to see how many horticulturalists have introduced hybrids, alongside their scientific identity, with names fixated with food! Kniphofia ‘Strawberries and Cream’ vies for attention with Coprosma ’Lemon and Lime’. Another shrub with fiery leaves, Coprosma ’Inferno’ sadly recalls recent devastating fires in Australia. Incidentally, the Society has since raised funds towards Australian habitat restoration.

Continuing to experiment in growing unusual foreign specimens, together with collecting local plants, and sharing knowledge with many other horticulturalists around the world, succeeds as a fine tribute to the memory of Sir Joseph Banks and carries his legacy forward for future benefit.

Put the Society’s Tribute Garden high on your bucket list, once ‘lockdown’ has lifted. Go explore an essence of the New World in miniature. Wander in off the High Street to find something novel to ponder, including a small plant stall. You might spy a passionflower stealing the scene, a symbol to underline Banks’s fervour for plants. His life journey, dedicated to learning and observation intertwined, inspires an enriching passion which many of us feel fortunate to share… and hopefully pass on.