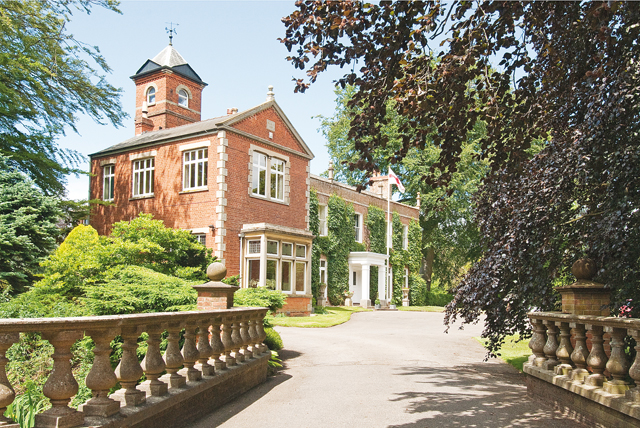 A hall with history

Many people will know the name of butchers George Adams and Sons for its famous pork pies, but fewer will know the family’s association with one of the most prestigious period properties in South Lincolnshire.
Yet over the last thirty-five years, the Adams family have been custodians of Pinchbeck Hall near Spalding, a stunning Grade II listed residence with an interesting history.

The hall was purchased by George Adams’ son George in 1976 and after his death seven years ago, his son Mark and partner Liz Alexander inherited the property. Now the couple have decided the time is right to put the house on the market and give someone else the chance to enjoy this very special family home.

Mark Adams said: “Pinchbeck Hall is a very beautiful elegant home and it’s been a pleasure to live here and maintain it to a high standard.”

It is believed Pinchbeck Hall stands on the site of an earlier Elizabethan property possibly known as Grove House. The stone columns on the parapet are believed to come from the old property which was burnt down; the cellar may also be from that earlier period.

The present Hall was built in about 1802 and belonged to the Browne family whose ancestry in Pinchbeck can be traced back to 1585. The lettering ‘LB’ on the exterior of the stable reflects this. In about 1902, the son of Leonard Browne remortgaged the property, deceiving his widowed mother in the process.

The popular local philanthropist William Stapleton Royce purchased the house from the receiver/trustee in about 1908. Royce was a local man who went to South Africa as a carpenter and returned in 1900 having made a fortune building the South African railways. He was also one of the main contractors on their Houses of Parliament.

When he bought Pinchbeck Hall, he added a Victorian wing to the classic Georgian building which he marked with a stone bearing ‘WSR 1909’. He also added a tower in the style of an African watchtower and completely refurbished the building.

Mr Adams said: “Royce was quite a character. He couldn’t get into Parliament as a Conservative MP so he crossed and got in as a Labour MP at what was quite a turbulent time politically.

“He bought the hall and several farms around it and enlarged the house because he had a large family with nine children. His wife had a soup kitchen and fed the poor from the kitchen door.

“It was said he had two Pygmy maids with him who were about four foot tall and people used to come and watch them go to church because they were somewhat of a curiosity.

“He died in 1924 on his way to the Houses of Parliament where he was going to be appointed the Governor of Tasmania. Apparently he fell asleep on a London omnibus and never woke up.”

After his death Royce’s widow lived at Pinchbeck Hall until the house was leased between the wars to Mr JWE Banks, whose sister Miss Banks lived at the property. Miss Banks later married Walter Johnson, from the well-known Spalding family who were engineers and agricultural machinery merchants, and the couple subsequently purchased the property.

Then in 1976, the hall was bought by George Adams and his wife Joan. George’s father had started the famous Spalding butchers and slaughterhouse George Adams and Son in 1910 and the business is still thriving today.

Mr Adams said: “When my parents bought Pinchbeck Hall it was in need of some renovations, but they were meticulous in keeping the character and period features of the house, such as the fireplaces and fantastic entrance hall.”

The property, which sits in five acres of grounds, is certainly impressive in its grandeur. There are four reception rooms, a well-appointed kitchen and a number of ancillary rooms, such as the butler’s pantry and gun room, china pantry and the flower room, on the ground floor, and six bedrooms and several bathrooms and shower rooms on the first floor.

The master bedroom with its en suite bathroom and dressing room features a trap door and folding ladder giving access to the watchtower above, which, after two intermediary levels, gives access to the roof.

Meanwhile, the house is brimming with period features such as stripped wood floors, marble fireplaces and vaulted and moulded ceilings. The stained glass front door bears the motto ‘All will come right’ in Afrikaans from Mr Royce’s time at the property and the entrance hall has an impressive tiled floor and grand staircase.

The house is approached over a sweeping driveway giving access to the coach house and stables, which are in original Victorian condition, and other garages. The five acres of mature gardens include a secret garden to the south of the property and fenced paddocks. There is also a separate two-bedroom bungalow called The Lodge.

Mr Adams has many happy memories of his parents’ time at the hall. He said: “Before my parents had even refurbished the house, my sister got married and we had a marquee in the grounds in February which was quite an interesting occasion.

“At Christmas, my father used to like to have a carol singing party and would invite friends and people from the village. There would be a glass or two, someone would play the piano and the choir and all the 150 or so guests would sing.”

Sadly George Adams passed away seven years ago and a year later the family decided to swap homes – Joan moved into Mark and Liz’s smaller property in Spalding and Mark and Liz, who have six grown up children between them, moved into Pinchbeck Hall.

Mr Adams said: “The house was too large for my mother on her own. At the time, I was running a large business with quite a few opportunities to use the house for business and entertaining, so it seemed right that Liz and I should move in.”

During the time Mark and Liz have owned the property, they have kept it to a high standard by carrying out a renovation project to the house every year and by maintaining its gardens.

Mr Adams said: “The gardens are wonderful and full of interesting specimen trees including a very big beech tree, an avenue of lime trees and some tulip and handkerchief trees.

“Liz is particularly keen on gardening and we enjoyed redesigning the garden at the back of the house to make it more formal. We moved a fountain which was in the middle of a lawn and laid paving to make it a feature.”

Now the couple have decided the time is right to place the property on the market and have started building a modern home next door to Joan’s house in Spalding.

Mr Adams said: “Five years ago I became ill which eventually led to us selling the family business and although I love the house, it no longer makes sense for us to live in such a large property.

“Pinchbeck Hall really is a friendly family home and we hope another family buys the property and enjoys living in it as much as we have done.”