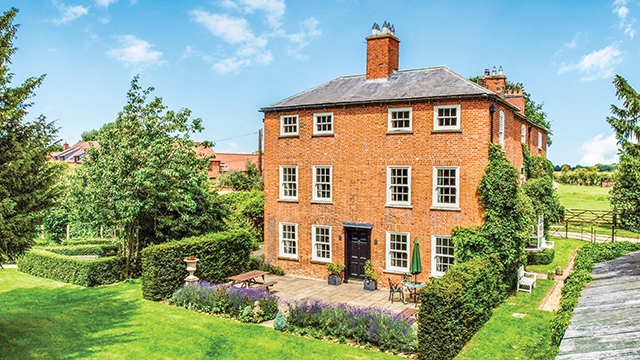 A handsome house with history

On the market with:
Mount & Minster

Wide open views of the Lincoln Cliff from Loveden Hill to Caythorpe and beyond are on offer at Brandon Hall, an elegant historical family home which has been lovingly restored and sympathetically updated.

Situated on the edge of a charming, tranquil village in the parish of Hough on the Hill, Brandon Hall is a stunning early Georgian detached residence, ideal for rural family life.

The owners, Alison and Roger, moved here 16 years ago and together they have carefully restored and transformed this handsome 10-bedroom historic house.

They are justifiably proud of their achievements, which has seen this remarkable residence not only returned to its former glory but also updated with family friendly features allowing the ease of maintenance required for modern living.

“Our first impression when we first visited the house was that it was huge!” says Roger.

“The number of rooms, stairs and corridors and the amount of land took some getting used to. It was clearly going to be a challenge, but we could also see it had huge potential.

“It was already a much-loved family home surrounded by a beautiful garden with rabbits running around, and although it needed some modernising, it felt light, spacious and welcoming.”

The couple, who moved to Lincolnshire from Wiltshire and Dorset after Roger was posted to RAF Cranwell, admit that deciding and agreeing exactly how to improve and enhance the property was sometimes a challenge, but all decisions made have proved worthwhile.

“Moving the kitchen allowed us to replace modern plastic windows with wooden sash windows of the original design and size,” explains Roger.

“We also removed a modern wall and staircase to make the kitchen larger and connected this to the dining room.

“We closed off one outside door and added one on the south (garden) side and in so doing found that we were in fact putting a door back to where there had been one decades or centuries before.”

The couple who have five children between them and fostered more than 40, aged from three weeks to 17 years, since they moved to Brandon Hall in 2004, also took on the project of opening up the previously derelict attic bedrooms.

“Having taken down one of the collapsing plaster ceilings we were surprised how good it looked with the exposed beams and high ceilings,” explains Roger, “so we cleaned up and insulated all four attic rooms. These large rooms were ideal for our teenagers, freeing up other rooms which we have used for fostering, which has been a rewarding experience for us.”

Roger also points out that being in the catchment area for grammar schools and not on a busy road has been important, as are the good road links to the south and Nottingham.

“We did not appreciate it at the time, but now that Alison’s son lives in Edinburgh, being near Grantham and Newark mainline stations with easy access to London is a real bonus too.”

The property is approached from Hall Lane and visitors arrive at a large gravel driveway with parking for multiple vehicles. Directly in front of the property is a large area of grass, currently left as wild meadow with established paths.

“We removed tons of concrete hardstanding from the back of the house, laid out a path and planted hedges and shrubs. A pond in one of the smaller gardens was hard to keep clean and not safe for children, so that was grassed over,” explains Roger.

“On the east side we re-shaped and gravelled the parking area, while on the south side we laid a large patio, leading into the lawns. However, we’ve done nothing to the outbuildings – that was the next job!”

The family has also enjoyed tracing the history of the house and its past occupants.

“The previous owners told us about some of the work they had done since buying the house from the Belton Estate and how German POWs had been housed in the servants’ bedrooms on the top floor, accessed via an enclosed staircase, leading down to a washhouse on the side of the house,” explains Alison.

“We became interested in local history and a quick look at who lived in Brandon Hall in the past developed into a large research project. We investigated links between places and families throughout the old Loveden Wapentake, which surrounds Brandon.”

Alison and Roger believe that Brandon Hall was built in the early 1700s, likely on the site of an earlier building.

“The top floor seems to have been added in the mid/late 1700s to provide servants’ quarters. Various additions and changes were made through the 1800s as the house was also the centre of a working farm and we understand that during the 1950s the building was home to up to five families.”

Brandon is a small, quiet village with a good variety of local amenities in nearby Caythorpe, which includes a doctor’s surgery, village shop, post office, primary school, antiques shop and hair salon, as well as the popular Brownlow Arms and other excellent pubs just a short distance away. With its quiet local roads, central location and easy access, the neighbourhood has proved ideal for the family.

The couple, who are now semi-retired and are taking a break from fostering, have decided to downsize and move to Dorset to be closer to Alison’s family.

Alison and Roger say they will always cherish memories of living at Brandon Hall through the seasons including “sitting outside on a warm evening enjoying the view, watching barn owls flying up and down the hedgerows, and relaxing in front of the wood burning stoves in the winter.”