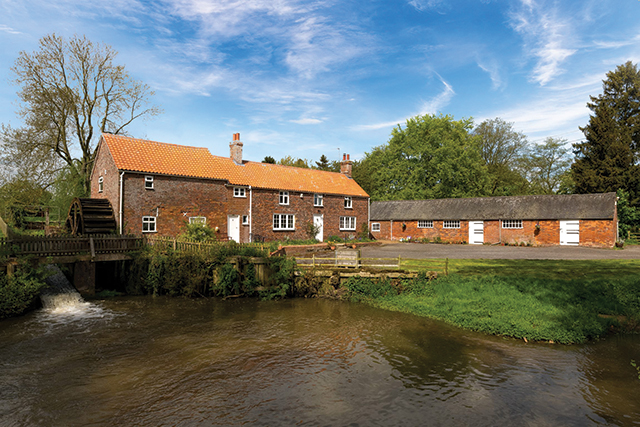 A home alive with history

On the market with:
Robert Bell & Company, Horncastle

Loved by Tennyson and immortalised in his poetry, Stockwith Mill at Hagworthingham remains a picturesque and peaceful location in the heart of the Wolds, finds Sarah Winstanley.
Extract from ‘The Miller’s Daughter’
by Lord Alfred Tennyson
(1833)

‘I loved the brimming wave that swam
Throu’ quiet meadows round the mill,
The sleepy pool
above the dam,
The pool beneath
it never still,
The meal sacks on
the whiten’d floor,
The dark round of the dripping wheel,
The very air about
the door
Made misty with
the floating meal’

When Helen Parsons wakes, it is the birdsong she hears and the never-ending rushing of the river as it passes by the millwheel. Hers is a magical place of birds, ancient woodlands, rivers and ponds and views of the glorious Lincolnshire Wolds. An extract from In Tennyson Land published over 100 years ago records the mill as ‘the scene of Tennyson’s homely and touching poem The Miller’s Daughter, which so impressed Queen Victoria that she was constrained, in spite of some opposition, to confer the Laureateship on its author. It is a captivating spot, well situated to vividly recall the scenes so sweetly portrayed…’

Tennyson was born at Somersby, just two miles further upstream along the River Lymn from Stockwith Mill, which has been in Helen’s family for over sixty years and Helen’s home for the last four.

Helen said: “This is such a special place. It was my dream to live here and I thought I would live here forever. Now I am having to sell, I am heartbroken.”

The millhouse, which stands on Harrington Road, Hagworthingham, in an Area of Outstanding Natural Beauty, was bought by Helen’s grandparents Bob and Brenda Overton in 1954. Bob was a farmer who lived in Wainfleet St Mary and grazed sheep on the land surrounding the mill.

“My grandfather never lived here but he had sheep on the land, planted a lot of trees and dug out the trout pond because he loved fly fishing,” said Helen. “His brother-in-law lived in the house and tended the sheep at that time; the ponds are still here but there are no trout in them now.”

Before Bob and Brenda died, in the 1960s and 70s, they gave the mill to their daughter Jean Parsons, who was Helen’s mum. Jean rented the property and tenant farmers worked the land. In 1979, the tenants who lived in the house, John and Marge Chapman, opened a tea rooms and screen printing business on the site and three years later Mr and Mrs Date took over, running the popular tea rooms and opening a craft shop.

Drawn to the mill, Helen – who grew up in Skegness with her mum Jean, dad Robert (known as Bob) and sister Ruth – took over the craft and gift shop aged 18. She sold commercial crafts such as pottery, jewellery and candles, as well as lots of stones, minerals and crystals.

Twelve years later, Helen decided it was time for a change. “I got to 30 and changed everything,” she said. “I wanted to spread my wings.” First she worked for Anglian Water, then became a Teaching English as a Foreign Language (TEFL) teacher in Santander in northern Spain for two years, before returning to the UK to work in Leeds and train as a healing practitioner. For ten years, she travelled the world, visiting over thirty countries teaching and training people, organising seminars and conferences but still keeping a home in Skegness near her family.

“It was fantastic to finally get the keys,” said Helen. “It was my dream to live here; I absolutely loved the place. My idea was to turn it into a holistic centre and have a tea rooms as well.”

Helen embarked on a major renovation project to bring the three-bedroomed house up to current standards. It was rewired, re-plumbed, re-roofed, a new central heating system was installed, a new kitchen fitted and the house was completely redecorated by local decorators Michael Carter and his son Adam.

A project to renovate the mill’s breast-shot waterwheel, which had last ground corn at the end of the 1940s, was also started. “An awful lot of work had been done to the axle and metal work and we managed to get the mill wheel turning again for a time,” she said.

But, she added: “I felt it was as though the house wanted to breathe and be a home, so I concentrated on turning it into a home rather than a holistic centre and tearooms.”

And what a home it was! The mill house beside the mill pool and the numerous outbuildings are set in a peaceful location surrounded by wildlife with seventy acres of gardens, orchard, woodland, grass land, arable land and ponds. There is a picturesque, circular one-mile walk around the gardens and the River Lymn, which runs through the grounds, is a constant feature.

Helen said: “All I can hear is birdsong and nature and there are incredible views of the Wolds from every window of the house. There are different places in the surrounding land where you can see for miles, even Lincoln Cathedral in the distance.

“The River Lymn runs past the house on its way into the River Steeping, past Bateman’s Brewery at Wainfleet and on to the Wash. I can hear the river now, a background noise, and I can see the river from every room in the house.”

Recently, however, Helen’s circumstances have changed and she has taken the difficult decision to sell her home along with over seventy acres of river, grassland, ponds and woods that surround it. Helen said: “I am heartbroken but I’m determined to find a new owner who will love this place as much as I do.”