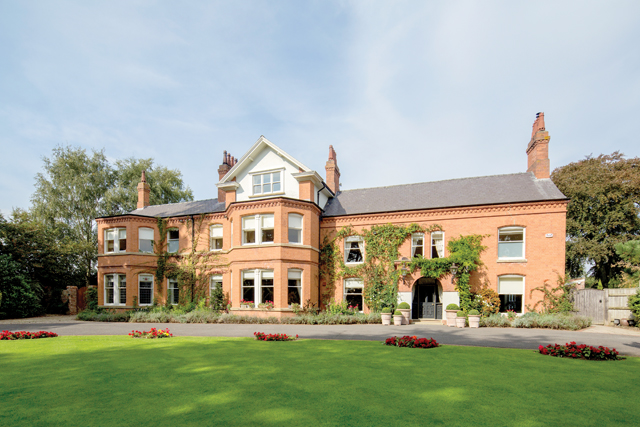 A home which is perfect in design and landscape

When Fiona and Ray Peckett decided to make Aylesby Hall their ‘forever’ home, they put their hearts and souls into the project.
Bringing in two interior designers to work on the house and a landscape architect to transform the garden, the stunning property at Aylesby, near Market Rasen, is a testament to their dedication to the place. But now, surprisingly, they have placed their home on the market.

Fiona said: “Aylesby Hall has a special place in our hearts because we got married here; it was our first home together and we spent a lot of time making it perfect for us.

“This was our forever home and it will be a very sad day when we leave, but we have found a very special property to move to.”

Ray, who is chairman of the global fancy dress and party company Smiffys, and Fiona, a PR consultant, had known each other in a professional capacity for many years before becoming a couple in 2010.

Ray’s story is that of a typical ‘boy done good’. He grew up in North London on the North Circular Road in Neasden and forty years ago lived next door to the chap who owned R H Smith and Sons, a wig-making company producing wigs for the NHS and judges in the law courts. At the time, the business was struggling and Ray, who was brought in to help, later bought the company.

Realising what a major calendar event Halloween was in the USA, Ray tapped into the market for spooky fancy dress, make-up and wigs and was instrumental in helping to bring the annual celebration into this country. The business, which became known as Smiffys, grew and grew and it is now the largest privately owned party company in the world.

Fiona, who has an eleven-year-old son called Bertie, had worked for Ray as a PR consultant promoting the Smiffys brand, but gave up work when Bertie was three, to spend more time with him.

Ray, who has four grown-up children from a previous relationship, bought Aylesby Hall in 2009. At the time, he was living in a sixth-floor flat in Leeds, where part of his business is based, and longed to have a country pad with a garden to put his stamp on.

“Ray could see the potential in the garden and bought the house for the garden rather than the house itself,” said Fiona

A year later, at Easter 2010, Fiona and Ray became a couple and Fiona and her son Bertie moved into Aylesby Hall in August that year. It was at that point that they embarked on a project to completely renovate the house and gardens.

“Ray didn’t do any work on the property until I moved in,” explained Fiona. “The house was structurally sound but the previous owners had modernised it and ripped the soul out of the place.”

Keen to make it their home for life, Ray and Fiona brought in interior designers Woods of Harrogate, along with Ray’s youngest daughter Sophie, who runs Sophie Peckett Interior Design, to transform in the house in a country house/modern style. The result is a home which combines original period details with an extremely stylish interior filled with delicious furnishings in every room.

Fiona said: “We were very involved with the design. The designers were amazing but both Ray and I were passionate about how we did the house up.

“Now, although the house is large, it feels warm like it is wrapping its arms around you when you step inside.”

But it is the garden which the couple are most proud of. Rob Crowder of Crowder’s Garden Centre in Horncastle recommended the landscape architect Ian Stubbs, based in Louth, to work on the garden which covers twelve acres.

“Ian’s vision for the garden and attention to detail was quite incredible. Now we have formal, almost stately, areas, rose gardens, walled gardens, a woodland walk – it all has to be seen to be believed and at night it is lit up and really quite beautiful,” said Fiona.

Fiona admits she is not the most green-fingered of people and quite happy to let Ray and Ian work their magic on the gardens.

Last September the garden was the stunning backdrop to the couple’s wedding, which Fiona describes as “heavenly” and took place in a marquee on the lawn. Lincolnshire celebrity chef Rachel Green was brought in to do the catering and the couple hired a string of entertainers including a saxophonist, tightrope walker and DJ from London (who Fiona didn’t even manage to see!).

Fiona said: “I had one month to organise it and was in bed by 10pm on my wedding night because I was so exhausted, whilst Ray and Bertie danced until 4am!”

The couple have now decided to put Aylesby Hall on the market. They are in the process of buying a house which they first spotted four years ago.

Fiona said: “We weren’t even looking for another property as Aylesby Hall was our forever home, but when we first got together we had seen a property near Leeds that we fell in love with. At the time, Ray had just bought Aylesby Hall and the house was priced too high so we put it out of our minds and ploughed all our love and time into our home.”

Then in July, Fiona couldn’t find a copy of her usual read, the Financial Times, and so bought a Yorkshire Post instead. On the front cover of the property section was the house near Kirkburton, just outside Huddersfield in West Yorkshire, that had tugged at their heartstrings four years previously.

“It must have been fate because I never buy the Yorkshire Post!” said Fiona. “The house is a very special property and it needed to be to take us away from Aylesby Hall. But it’s in a better location for us as it’s only twenty minutes away from Leeds where Ray works a lot and closer to Bertie’s school.”

Luckily for them, the couple’s new home has already been renovated. “We never want another project again,” Fiona joked. “We are exhausted!”