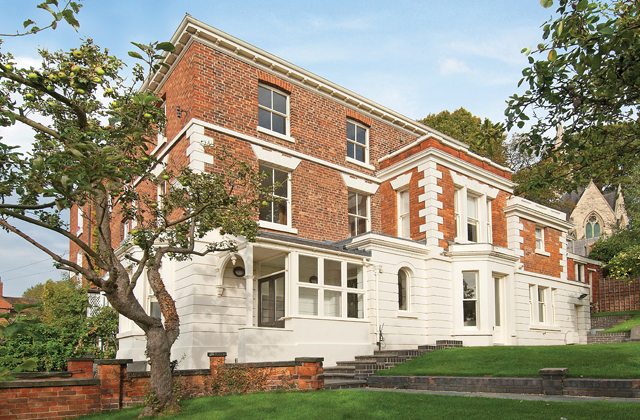 A house with a view

Nestled in the heart of uphill Lincoln, Ventnor House is a property with a lovingly documented history and an owner who believes her time there was ‘meant to be’.
The town house, which dates from around 1850, sits in an elevated position with views over the city and a backdrop of the ancient walls of the Bishop’s Palace and Lincoln Cathedral beyond.

And although our vendor has chosen to remain anonymous, it is certain that her ownership and restoration of the house will go down in its history too.

She said: “The house and its history is the true story here. I have just been a custodian for some time and am pleased to have been able to have restored it and hope to have served it well.

“I have an amazing file of old manuscripts and vellum indentures which document the sales and leasing of the land over time. They date back as far as 1790 and include the names and seals of the bishops and prominent individuals that lived and worked in Lincoln, some of whose names may still be familiar to us now.

“It is so unusual to have such a pile of original archive documents with a property. I believe it is testimony to how much each individual owner has truly loved and valued the land and the house over the years.”

The house and the land it stands on does indeed have a fascinating history. The earliest document is dated 6th February, 1790 and is an indenture detailing the sale of the land, described as an ‘Orchard in the City of Lincoln’, from Mr John Carline (by the name and description of John Carline Junior) to Mr James Casterton.

Then on 23rd December, 1829 a counterpart of the lease indenture documents the land being transferred from The Vicars Choral of the Cathedral Church of Lincoln to John Casterton of Market Rasen, witnessed by Mr Edward Betham and referencing Charles Partridge of Riseholme, John Jackson Rhodes and Thomas Rhodes of Market Rasen.

The orchard or apple garth was then leased from John Casterton to Richard Taylor, described as a city of Lincoln Yeoman, on 23rd October, 1844. Six years later on 3rd September, 1850, the land passed from Richard Taylor to Lincoln builder, Charles Ward.

Mr Ward built ‘three middle class dwelling houses’ fronting Ventnor Terrace and an original auction poster shows that these were sold at auction by Mr TJN Brogden on 19th May, 1852, at the Corn Exchange. (Charles Ward was Mayor of Lincoln in 1872.)

Almost twenty years later, all three properties on Ventnor Terrace were listed for sale in particulars at an auction in January 1871 and Mr John Whalley purchased Ventnor House at that time.

Mr Whalley was described as a ‘gentleman and bachelor’ who lived next door at No 3 Ventnor Terrace. He came from a family of auctioneers and valuers whose offices were at Palfrey Chambers in Silver Street, the old Co-op site.

It seems that Mr Whalley was keen to extend the boundaries of the property and on 4th July, 1872 a vellum (signed and sealed by, among others, Henry Thomas, the Earl of Chichester) and an original Bank of England receipt show the freehold of the garden was sold by the Church Estates Commission to John Newton Whalley for £100.

In November the same year, documents show that John Whalley purchased the corner plot of land, which used to be the manure dump for the area, for £35 from draper Joseph Collingham.

The vendor added: “A few years after it was built, the house was extended by about six feet on the garden side with a dual storey extension which includes the porch, balcony and bays to the front and side. Given the fact that he purchased the land on freehold at the time, I believe that this would have been the work of Mr Whalley perhaps when he married. When Mr Whalley died in 1913, the house was passed to his wife.”

She added: “Mr and Mrs Whalley were obviously keen gardeners as the folly shed has a large propagating shelf with windows to the south. The whole garden is south facing and there is evidence against the palace wall of there having been two substantial glass lean-to houses, probably for new, exotic fruits as was the trend then.

“The orchard trees still remaining are thriving and still bearing fruit – apples, pear and plums – to this day!”

Bringing the history of the property up to date; as a child, our vendor would visit family on Lincoln’s Steep Hill and remembers being fascinated with Ventnor House even then.

She said: “As a child, I used to play in the children’s home on Steep Hill and in the Usher Gardens. I knew the house and called it the Secret Garden House because it was surrounded by a high wall. Even then, I thought the building was stunning and wanted to live there.”

By 2001, our vendor was working for an investment bank in London when she returned to Lincoln to visit family and noticed a ‘for sale’ sign outside Ventnor House.

She immediately placed an offer on the house but was outbid.

“I was delighted because it was like it was meant to be. I couldn’t view the property again because I was working in Hong Kong at the time but we proceeded straight away.”

With a busy work schedule, it was several months before our vendor could visit the house. She said: “I remember the estate agents ringing me in the autumn to say they still had my keys!”

In 2005, our vendor brought in a team of builders to take the house back to the brickwork and restore it completely.

At this time, the house was re-roofed, repointed using traditional lime mortar and new drains were dug out. A servants staircase and privy at the back of the house were removed to open up the kitchen, three bedrooms were turned into four (one with an en suite and walk-in dressing room) and a new kitchen and bathroom were installed.

She added: “I tried to restore the house based on a timeless, classic look. If you reinstate original period features into a property it doesn’t matter how you dress the rooms because the property itself is beautiful.”

Our vendor moved back to Lincoln in 2006. She said: “I wanted to spend some time in the house with my family and friends, and shake off the stressful life I’d been living in London for the last ten years.”

She added: “The house could be anywhere and I’d be happy to live in it. I believe properties have a certain aura and this house feels really welcoming when you walk through the door. It is very well laid out and the proportions are great. My grandmother always said that it was a modest-sized property that actually felt grand.”

Despite spending many happy years in Ventnor House, our vendor has decided the time is right to move on and has placed the house on the market.

So who would she like the next owner of the property to be? She said: “The property would work for anyone but maybe the original builder Mr Charles Ward should have the last word.

Describing the property for auction in 1852, he charmingly wrote: ‘The situation of this property is considered most healthy, being perfectly screened from the north and east winds, and yet is so elevated as to command an extensive panoramic view of the surrounding country, embracing a near and most beautiful view of the Ancient Palace Ruins; indeed an opportunity is offered to the retired man of business who wants a private quiet residence at a reasonable cost, or to anyone desiring an investment that rarely occurs.’