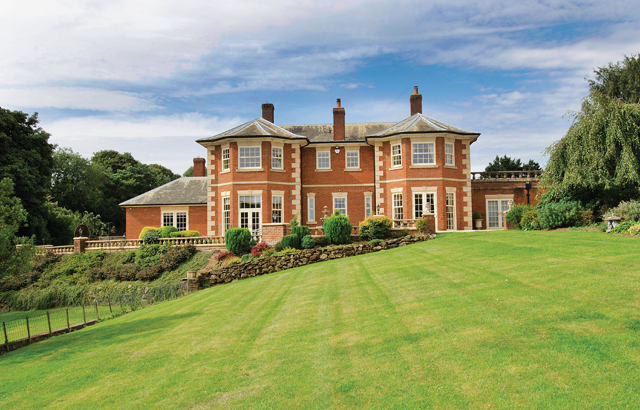 A magical manor in the Wolds

Maggie Lewis and her husband Richard lived in an ‘unbelievably beautiful and unique’ home in Yorkshire for twenty years before the pull of Lincolnshire called them back.
The idyllic property on the banks of the River Nidd, near Knaresborough, was set in thirteen acres of woodland, was private and surrounded by wildlife. So it was hardly surprising that it took the couple five years to find a property which could lure them away.

But, on a chance trip to Lincolnshire in 2006, they found Raithby Manor on the edge of the village of Raithby, near Spilsby, and fell in love with the magnificent building and its location in an Area of Outstanding Natural Beauty in the Lincolnshire Wolds.

“It was love at first sight,” said Maggie. “We fell in love with the views and saw a potential in the house that was quite incredible.”

Returning to Yorkshire, the couple put their house on the market and just ten days later became the new owners of Raithby Manor, a modern house set in 3.4 acres of land with stunning views across a lake in the grounds. The building, which is only thirty years old, was built by Janette and Graham Hunter who once owned Raithby Hall next door. At that time, the Hall was a residential home and the Manor was built in its grounds.

Although they are both now retired, at the time Maggie was a complementary therapist running workshops and holding talks, and Richard ran AMS Grimsby Ltd, or Think Green Cars, and previously ran a group of garages, White Spot Motors.

Born in Cleethorpes and having lived in South Kelsey for many years, Richard was pleased to return to the county he had once called home. The couple have two grown-up children, Julian and Simon, and five grandchildren, and share their home with a Jack Russell called Tilly, two cats, Tabitha and Duffy, and a parrot called Digby.

Over the next five years, Maggie and Richard embarked on a project to improve Raithby Manor.

“We knew that structurally the house was good and a lot of the rooms were fantastic, but we decided to make some changes to improve it and brought in the best local experts to do so,” said Maggie.

The kitchen was renovated by Peter Jackson, and Richard Sutton revamped the bathrooms. Meanwhile the main bedroom with its dressing room and en suite was renovated, forty-two new double glazed windows were installed and a ground source heat pump was fitted to centrally heat the building.

“All the rooms in the house are large so everything takes quite some time to do,” said Maggie. “When we revamped the bedroom suite it took eight to nine months. We loved doing the work and it was so pleasurable to make the house exactly as we wanted it.”

Outside, Stephen Betteridge created new patio areas around the property, the tennis courts were recovered, and Mark Viagrass was brought in to advise on nature conservation and redesign an area of woodland, which has revealed a small copse of mature silver birch trees.

The couple now have a caged garden with a series of poly-tunnels in which they grow enough fruit and vegetables to enable them to be self-sufficient in the summer months.

Now the house and gardens are a testament to all their hard work. The grand entrance hall has a double height ceiling and minstrel gallery and the double reception room, sitting room, study and split-level kitchen/breakfast room, remodelled by Peter Jackson, all open onto an elevated terrace with far reaching views.

The dining room off the kitchen is currently set up as a home office and in the cellar there is a twenty-one-foot games and utility room.

Upstairs there is a reading area on the first floor landing and a master bedroom with a range of fitted wardrobes, a bespoke window seat and walk-in dressing area which leads to an en suite bathroom.

The guest bedroom has an en suite shower room and there are two further bedrooms and a family bathroom.

Outside there is a self-contained, one-bedroom flat above the triple garage and a gravel driveway set behind electric gates.

Several different gardens to the front and back of the property feature many specimen trees. The grounds to the east of the Manor feature lawns gently sloping down to a picturesque lake, with views of the Wolds beyond, and a hard tennis court is tucked away in a walled garden. There are also three timber stables and a tack room.

“We’ve had lots of memorable times in this house,” said Maggie. “It particularly lends itself to parties and one Christmas we had a party for fifty guests and the house didn’t feel crowded at all.”

Now, however, the couple have decided to sell Raithby Manor to move closer to their youngest son and his four children. They have decided to move to North Lincolnshire to stay close to the many friends they have in the county.

“This is a magical place and it’s been a pleasure living here,” said Maggie. “We hope whoever buys the house will love it as much as we have.”