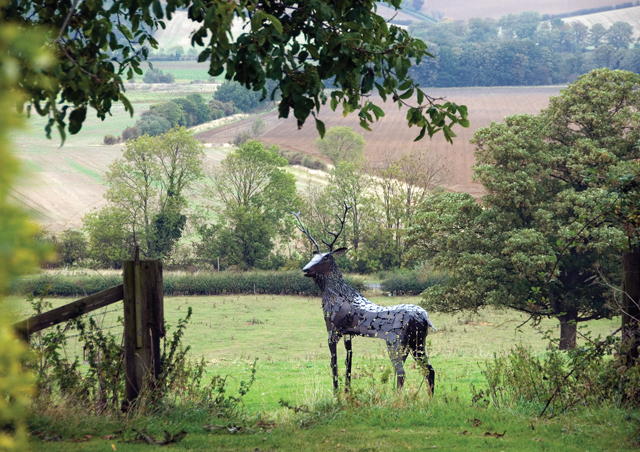 A man of metal

Steffie Shields meets a metalwork sculptor whose creations are now ornamenting Lincolnshire gardens.
Recently I spent a morning with Jo and David Sharpe in West Willoughby, a visit as uplifting and intriguing as the lane winding up to their old farmstead. Why? Firstly, the landscape setting is so picturesque that John Constable would have been happy to immortalise it. Secondly, time spent with someone visually creative is always energising. I found it touching to see that Jo is very proud and supportive of her artist husband, who also runs a gardening and landscaping business. With time to observe and think, gardening inspires many of his creations using items from the scrapheap.

Originally the grange farm of the Thorold family’s Syston estate, their house was built in the late 1830s beside an earlier complex of barns, on a ridge that is part of the Lincolnshire Edge. David grew up with stunning wide-ranging views, looking out over a valley where iron ore was once mined, and a quiet hamlet, West Willoughby, in the middle distance. His childhood landscape goes a long way towards explaining his sensitivity to nature, to animals in their natural habitat and, as if by osmosis, a gradual, unconscious leaning towards an interest in metals. Lately there have been very adult outcomes. David now engineers significant pieces of sculpture. He did not study art at school, but has always enjoyed being creative. One day, though he had never made anything life-size before, he participated, aged seventeen, in a Young Farmers’ challenge to make a cartoon model with bits of scrap metal lying about on the farm. His ‘Bugs Bunny’ won first prize and was later exhibited at the Lincolnshire Show.

If it has taken some years to germinate, a seed must somehow have been sown. At first he dabbled in watercolours and acrylics, joining Oasby Art Group to learn more about painting.

One year, trying to paint something fitting the chosen theme of the group’s annual exhibition, ‘Midsummer Magic’, he lost motivation and felt increasingly frustrated, so took himself off to the farm workshop to see if he could make something with an angle grinder and basic welder. Some hours later, Jo tells the story, he appeared at the kitchen window wielding an impressive dragon’s head. Much to her surprise, David announced, “This is only the beginning, I am going to make the body next.” A star was born. The seven-foot flame-spitting dragon became a crowd-pleasing exhibition centrepiece, caused a sensation and three commissions followed.

The same year, harvest 2009, David and his family entered Weetabix’s Wheat Art Competition. Some readers may recall his amusing, monumental creation made out of bales: a mammoth family – Mambo, Martha and Twinkleberry. Raising £850 for the Pilgrim Hospital Children’s Ward, it won the national competition and has featured on Weetabix boxes since 2010. The heartwarming story is now immortalised in ‘The Magic of Mammoth Hollow’, a children’s book by Jo’s mother, Linda Whatton, illustrated, yes, you guessed it, by David.

As I watched the ‘King of recycled cutlery’ polishing a snappy-looking fish that had been sprayed with a layer of black paint to give depth, David told me:“I don’t use anything that’s useful!” Not quite true: bent dessert spoons making the curvaceous arched back of a strutting peacock with trailing fantail caught my eye. David rarely sketches out his ideas first; they evolve from found objects, nuts, cogs, bolt cutters, anything that stimulates his fertile imagination. Sparks fly, literally, as he wields his tools.

An innate awareness of three-dimensional form and space enables him to piece scraps together like a complicated jigsaw, conjuring up winged owls, seahorses, flying fish, hummingbirds and water lilies. Apparently pliers make great fish tails! His work has been widely displayed in exhibitions including a weeklong summer celebration, Sculpture and Plants (SAP) at Harpswell Hall Farm. Go and find an original, one-off Christmas present for your garden, if not for someone else’s, at ‘Flash Trash,’ a recycling exhibition being held 8th October – November 12th, at Harding House Gallery, Steep Hill, Lincoln; David is also showing at ‘A Bowlful of Fools and Angels’, along with artists and makers passionate about art, 25th November (Preview) – 27th November, at 105 West Parade, Lincoln.

Increasingly interested in working with wire, after making a large summer garden chair inspired by the Far East, David wants to try his hand at more figurative work. Even his rustic workshop, chock full of curious bits and pieces, seems a fascinating art installation.

Each individual, handcrafted sculpture is unique. See www.davidsharpeartist.org.uk. David accepts commissions and posts news on Facebook. The most iconic piece in his portfolio, standing out from the crowd, is ‘Monarch’ – a life-size stag, laboriously fashioned by welding pieces of sheet metal together. At a distance one could take this for the real beast, perfect for a landscape garden. If they say art imitates nature and necessity is the mother of invention, this man of metal, still found ‘playing’ in his childhood haunts, is fast becoming a ‘father of fantasy’. One wonders what his next ‘scrapheap challenge’ will be.