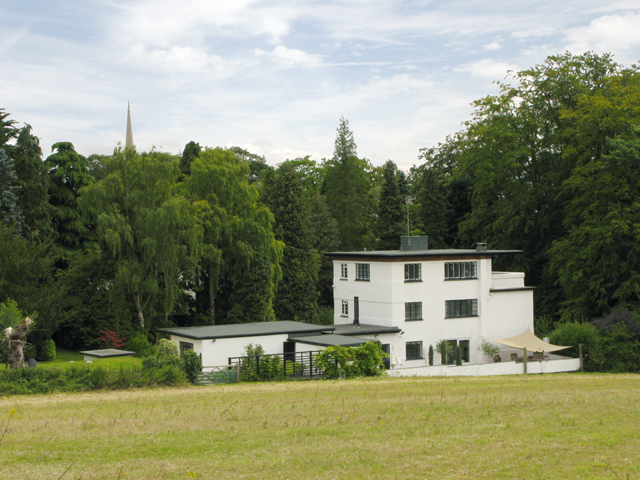 Although Dawn Shuttleworth had known ‘The House that Jack Built’ at Louth was on the market, she hadn’t mentioned it to her husband Jules.
She had seen adverts for the award-winning home in local newspapers and magazines and although the couple had been house-hunting on and off for some time, she was sure that particular property would not be to her husband’s taste.

Maybe it was fate then that saw Dawn and Jules standing before the estate agent’s window on New Year’s Eve seven years ago. The couple had driven to Mablethorpe to bring their disabled son Jody home to Caythorpe Heath, near Grantham.

“Nothing was open in the town centre so we found ourselves looking in the estate agent’s window,” Dawn said. “I couldn’t believe my ears when Jules spotted the property and said he’d always wanted to live in a house like that!

“For over a year, I’d seen the house advertised in the newspapers but I couldn’t imagine he would like the design.”

The house is certainly unusual for a market town such as Louth. It was the winning entry in a competition at the ‘Daily Mail’ Ideal Home Exhibition in 1931 when visitors were challenged to create ‘The House that Jack Built’ – a property that a married couple could live in without the need for a housekeeper or extra staff.

Thomas Dalgleish McLean won first prize in the competition for his sleek three-storey Modernist design – collecting a cheque for £250 and seeing his house built at the show for the first time.

In his view, houses could be more practical in planning and layout to ensure they were easier to maintain. He said: “Manufacturers have driven drudgery out of housekeeping with ingenious equipment but actual construction has not been materially altered to exclude features that create work.”

McLean’s ingenious design featured measures to keep down dust, windows that could be cleaned from the inside and maid’s quarters that could be hidden away by the fitting of just one door.

The design certainly appealed to cinema owner, Bertie Hallam, who spotted the house at the exhibition and decided to build one in St Mary’s Lane, Louth, one of the town’s most upmarket areas.

During its construction in 1932, the property caused quite a stir. Locals either loved it or hated it; some chose to picnic in the field above it to watch it being built!

Louth had certainly never seen anything like it – its sleek Modernist lines stood in glaring contrast to the traditional buildings the town was known for.

But seven years ago as, standing outside the estate agents, Dawn realised that Jules might be persuaded to buy the house, she felt an overwhelming desire to act. Knowing her husband well, she didn’t say a word about her longing for the property, even though she felt a flutter of excitement at the prospect of living there.

The next day as Jules headed to Germany on a business trip, she drove back to Louth to pick up a brochure herself. Mentioning that she was only in town for a short while and that she would like to view, she was thrilled when the owner said she could come round in half an hour.

Dawn said: “By the time my husband phoned home that evening, I had already viewed the house and fallen in love with it. It was so unusual and I couldn’t wait for my husband to take a look for himself.”

On Dawn and Jules’ first viewing together, the owner, Jane Crisp, let the couple walk round unaccompanied while she made coffee in the kitchen. Dawn didn’t say a word as she and her husband took in the house with its spacious, light and airy rooms, white painted walls and newly renovated kitchen and bathroom.

“When we reached the kitchen, my husband turned to the owner and said, ‘When can you move out?’”, Dawn said. “My mouth dropped open and he said to me, ‘And you can close your mouth!’ I was delighted!”

The couple immediately put their house on the market (it sold straight away) and moved into ‘The House that Jack Built’ in May that year. Dawn said: “The house turned out to be a wonderful backdrop for our modern furniture and my paintings and we soon settled in.”

Dawn dedicated much of her time to her art and has recently started to work with glass, whilst Jules never fully retired from his work in the international luxury coach industry and now works as a consultant from an office in the garden. The couple have four children Karoline, Helen, Justin and Jodi and eight grandchildren.

Dawn added: “Living here is like being on holiday. It takes me six minutes to walk into Louth along a beautiful road full of period houses and past the church, and I go from shop to shop having coffee. Everyone is so friendly.”

Although the house was perfect, the garden, which features a Second World War air raid shelter, never really matched it in the design stakes. That was soon to change when local mother and son garden design team, Prisca Furlong and her son Dominic, put a flier through the door advertising their services.

Dawn said: “We were the only people who replied to Prisca’s flier and she was thrilled to receive our commission. The previous owners had done nothing to the garden – it had a flowering cherry that was taller than the house itself – and we wanted the garden to properly reflect the property.

“Between the three of us we came up with this design with white curved walls and up-lighters in the birch trees. It’s a good sized garden but easy to maintain because all the plants are hardy – we don’t do annuals – and there are just three or four patches of lawn among the trees. There’s a wonderful courtyard garden at the side of the house which is such a sun trap and an enclosed vegetable garden with a sign on the wall which reads ‘The House that Jack Built’.”

Last year the couple installed an Aga, granite worktops and a new sink in the kitchen to make the house even more appealing.

But although they have enjoyed living in their home, last year the Shuttleworths decided to put it on the market.

Dawn, who is a member of the Louth Flower Club and Lincoln’s Winter and Summer Painting Society (WASPS), explained: “The house is on the market because I need a bigger studio as my paintings are getting bigger and I’ve started to use glass. We have a Red Setter and I can’t work in glass anywhere near her.”

Although the couple have had several viewings, the market is such that many people are not in a position to move. It means that Dawn has plenty of time to look for her next perfect property and despite her daughter encouraging them to move to Hampshire, the couple have decided Lincolnshire is right for them because of its slower pace of life.

Wherever the Shuttleworths find themselves next, they’ll probably never beat ‘The House that Jack Built’ for its unique design: after all you either love it or you hate it!