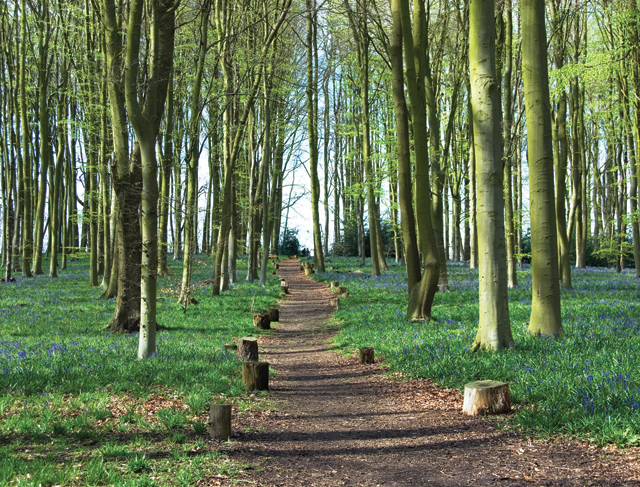 A natural way to celebrate

Steffie Shields focuses on red, white and blue
Yes, the flags are out! At times like these, people choose to express feelings, special memories or celebratory tributes in their gardens, as well as in their homes, especially if planning garden parties. This ‘double whammy’ year – Her Majesty the Queen’s Diamond Jubilee and the Olympics – has given us every excuse to celebrate. Of course, a few red, white and blue scatter cushions on your outdoor furniture might set the stage, but why not be patriotic in your planting?

In the early 1960s John Fowler, of the interior furnishing firm Colefax and Fowler fame, took the Union flag as the inspiration for his design for a potager at Grimsthorpe Castle. The triangular beds and paths are still enjoyed from the reception room windows of the castle. Without the trouble of levelling and laying out the Union Jack, you will add a loyal feel to your patch by introducing the colours red, white and blue in one or two prime locations. A simple, traditional route would be to sow or buy up trays of annuals for cheerful patio tubs and patterned carpet beds, begonia, lobelia and alyssum, also recalling our Victorian heritage and another remarkable queen. However, despite drenching rain and saturated gardens as I write, the drought and hosepipe ban may mean that repeat-flowering bedding is difficult to keep in pristine condition. A number of bold pots of bright red geraniums or pelargonium should flourish in dry conditions, offset by blue skies and white clouds, but let’s consider other inventive ways of combining the colours of our national flag.

Red complements green and is therefore a must for any garden setting, a striking punctuation point that draws the eye, and wins hearts. Imagine, for instance, red peonies together with blue irises beneath pristine white pear blossom. Picture, in your mind’s eye, summer’s bejewelled herbaceous borders. A yew hedge interlaced with garlands of Tropaeolum speciosum with flame-red flowers, like delicate nasturtiums, makes a superb backdrop to spires of blue and white delphiniums. Tall, blue or white bellflowers, Campanula lactiflora, are appropriate, partnered perhaps by a bold clump of vibrant red lilies, or Lychnis chalcedonica. Be careful not to have just red and white blooms, or you may offend those superstitious folk who see this combination as unlucky, ‘blood and bandages’. True, the emblematic red rose of Lancaster, Rosa Gallica Officinalis, and the white rose of York, Rosa alba, recalling the battles between royal and family dynasties, are part of our island history. Be they shrub, standard or tea rose, there are numerous named red or white varieties. One ‘nearly blue’ rose, the popular Rosa ‘Blue Rhapsody’, would blend into the patriotic mix. Tall, red and white standard roses look effective rising above a misty blue carpet of low-growing lavender, catmint, or varying blue shades of hardy geranium more commonly known as ‘cranesbill’. ‘When in doubt, plant a Geranium’ was the motto of the late plantswoman, Margery Fish. A pergola, iron arch or obelisk covered in climbing red roses, such as Rosa ‘Ena Harkness’ would dazzle, intertwined with Clematis ‘Prince Charles’ and the double white, long-flowering Clematis ‘Arctic Queen’.

Every garden should have a touch of blue – if not a whole corner devoted to blue – perhaps offset by delicate, white-flowering shrubs and trees. To narrow the wide choice, I recommend double white cherry for magnificent blossom, Philadelphus and Viburnum mariesii. A couple of years ago kind friends gave us three Rosa ‘Ruby Wedding’ for our fortieth wedding anniversary. I planted the roses in one small ‘comma’ bed, devoted entirely to red, in front of a copper-beech tree, surrounded with Pulmonaria rubra and red primula for early spring, and in summer Heuchera ‘Plum Pudding’ for its foliage interwoven with that easy-to-sow annua, nasturtium.

Blue, Her Majesty’s favourite, is the colour for fashion designers this year, and what we choose to wear often has a knock-on effect in colours that we plant. We all delight in bluebells and the chance to forget troubles by exploring winding, dappled woodland paths, and marvel at the nodding haze under emerging fresh and floating lime green foliage. Their powerful perfume transports us into a peaceful realm of childhood nostalgia, a suggested glimpse of heaven. My husband and I were lucky to retire to an old orchard garden already rich in both blue and white bluebells. I did not realise that by adding a shrub, Photinia ‘Red Robin’, that my daughter Gabrielle gave me one Mother’s Day, this would actually produce a magical, celebratory effect in late spring. Now purposefully trimmed into a ‘lollipop’ tree, its shiny new red leaves create a strong, focal point among bluebells, a clump of perennial repeat-flowering blue cornflowers, Centaurea Montana, against the white silver birches, cherry blossom and cow parsley. Such happy coincidences are the stuff of gardening!

Recently, around the time that the Speaker of the House of Commons, John Bercow was welcoming Her Majesty the Queen to Westminster Hall for the unveiling of a beautiful stained glass window displaying her personal coat of arms, I happened to be visiting my daughter’s family in Guernsey. They took us to see the quaint ‘Little Church’. Among charming mosaics of china and shells, I could not resist photographing a detail recalling that eyebrow-raising phrase used by the Speaker: ‘Kaleidoscope Queen’. This royal mosaic is an idea worth sharing. There must be countless items of cracked Coronation memorabilia china lurking in the backs of cupboards, at car boot stalls or in charity shops. The long summer holiday looming ahead would be the ideal time for you to make a similar garden feature mosaic with children or grandchildren.

Forget-me-nots are prolific self-seeders; just one packet is an investment. Once they establish themselves, unless you are a perfectionist, manic weeder, they will continue to surprise you, popping up in new places every year. This autumn, transfer a few seedling forget-me-nots to edge tulip pots filled with clusters of poster red bulbs, and in spring add white violas in amongst them a – simple yet loyal message for your front doorstep. If the natural and up-to-the-minute ‘meadow look’ is more your scene, scatter a packet of red poppy, ‘moon’ daisy and blue cornflower amongst barley grass seeds. Look online to research planting ideas from nurseries. Let your creative thoughts flow and be original in choosing patriotic plant combinations, a crowning glory for your garden. Next year’s fiftieth anniversary of Coronation Day will be another great excuse to get the barbecue and bunting out!