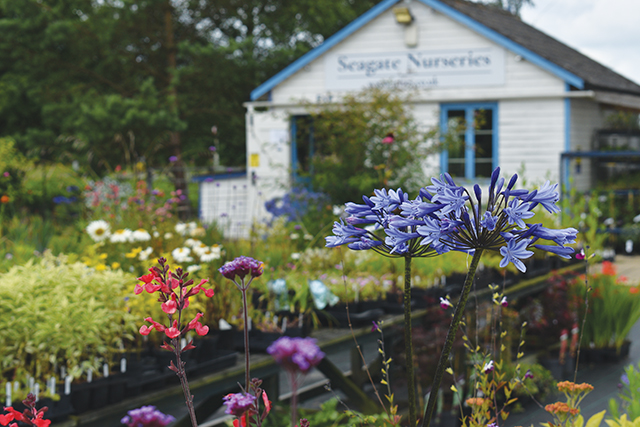 A new lease of life at Seagate

Guy Petheram meets the owners of Seagate Nurseries to discuss the enduring appeal of the iris and how the business is expanding its plant offer and showing a commitment to sustainable practices.

Driving eastwards on the A17 through rural Lincolnshire, church spires and wind turbines punctuate a flat landscape. This is prime growing country with fields stretching left and right unbound by hedgerows and brimful with cabbages, leeks and potatoes.

Approaching Holbeach, something a little less agricultural appears. For half a kilometre the passing traffic may, depending on the time of year, be treated to the colourful stock beds of Seagate Nurseries, a small nursery that holds one of the largest collections of bearded iris in the country, along with a range of other prize perennials.

Chris and Kate Davey took over the business in May 2018, just as that year’s peak iris season was starting. “It was a baptism of fire,” says Chris, “the beds were a bit neglected and we had an intense few days mowing and weeding before the big opening.”

At the time of my visit, I find Chris grappling with the consequences of coronavirus lockdown, which unfortunately coincided with this year’s peak season. “Obviously it has been hard,” says Chris, “with a dozen plant fairs cancelled and no customers for three months.” But he remains optimistic about their fledgling stewardship of this established horticultural enterprise, and has been busy making changes and necessary improvements to the site.

Seagate’s previous owners, Julian and Wendy Browse, set up the nursery in 2000 and over the next decade developed an internationally renowned collection of bearded iris. By 2010 they were exporting to stately homes and botanic gardens around the world.

“I had been a customer for 15 years, so knew the place well and loved coming to see the iris. One day Julian jokingly suggested that I should buy the nursery and by strange coincidence I was at the time looking for a new venture. Within a week the deal was done!”

Chris’s background is as a landscape gardener and through many years of hands-on experience he has developed his horticultural knowledge. “I love plants that make a real impact and the iris is definitely one of those. From April to June there is nothing to beat the neat massed ranks of brilliant blooms.”

It’s certainly true that modern hybrids have become ever more flamboyant but still it’s possible to find less blowsy flowers in old favourites such as ‘Jane Phillips’ and ‘Quechee’. However, it is the range of colours that is truly remarkable (no wonder as the name ‘iris’ is derived from the ancient Greek word for rainbow) and there is possibly no other variety of plant that covers so much of the spectrum. Only a true red and a green remain, for now, beyond reach.

The charms of bearded iris don’t end there. “What people often don’t know is that many have an amazing scent. One of my favourite things about working the nursery is arriving very early on a warm still morning and, while doing my usual rounds, being struck by pockets of fragrance hanging in the air. It’s nice to cut a few blooms for the shop to greet customers.”

The bearded iris is without doubt a plant with pedigree and has been highly prized for centuries, and not just for its garden merit. Historically orris root (the root of the species) was prized in herbal medicine and used in the treatment of a range of ailments from nausea to skin conditions and today the essential oil is still used in aromatherapy (it is worth knowing though that some parts of the iris are poisonous so it should only ever be used by recommendation of a professional medical herbalist).

It is the flowers themselves that have, more recently, captivated the imagination of artists, gardeners and high society alike. Vincent van Gogh painted them on many occasions and the scented blooms became fashionable in Parisian homes in the 19th century. But it is the extent to which plant breeders have applied their skills to the bearded iris that really reflects their popularity. So many new varieties continue to be developed, particularly in Europe and North America, that anything first bred more than 30 years ago is officially classified as historic.

On top of all that, “they are really easy plants,” explains Chris, “drought tolerant and happy on most soils provided it is reasonably free-draining. What they do need is plenty of sun, and the rhizomes should be planted slightly proud of the soil surface so they get baked.”

But while irises will always be showstoppers at Seagate, Chris and Kate are keen to develop things too. “They are the backbone of the nursery, and in fact since being here we have added another 150 varieties, but with flowering concentrated between April and June it’s important that we are able to offer customers more. What we want is to create a proper old-fashioned nursery, where people can find a range of good quality plants throughout the season, along with friendly advice.”

To that end they have changed the name of the nursery from ‘Seagate Iris’ to ‘Seagate Nurseries’ and have been busy building up a stock of other perennials, with varieties that both complement the iris in terms of conditions and extend the season of flowering interest. “We will have a range of classic perennials such as agapanthus, achillea, crocosmia and echinops, and also more unusual varieties, so our plant list will be constantly changing.”

Chris is keen to make his mark in other ways too, and is committed to managing the nursery as sustainably as possible. “Bearded iris are unusual in that traditionally they are lifted and divided in summer, after flowering. So they have the advantage that they can be sold as bareroot plants and dispatched by post in August, so avoiding the need for plastic pots. It also means they require no irrigation while growing in the stock beds, as they thrive in the dry conditions in this part of the country.

“There are a few other perennials that can be divided and sold bareroot in summer, so we will be expanding our collection of these. Daylilies are one example – a fantastic summer flower that comes in a great range of colours and follows on nicely from the iris.”

Since taking over Seagate, Chris, with help from Kate, and occasionally the enthusiastic assistance of their two young children, has steadily been taking control of the nursery, improving the facilities and growing space. Two new polytunnels have been built, trees judiciously removed to allow more light and stock beds reshaped and re-organised.

“We have expanded the display area for potted plants considerably,” Chris says. “When people come and see the iris, not everyone wants to wait a month until they are available bareroot as mail order plants, so we will have around 150 varieties potted up and ready to go, along with all our other container grown stock. All of which will eventually be grown in peat free compost of course!”

At Seagate Nurseries, you will find the iris in full flight in May and early June – and it is truly a sight to behold – but with summer bareroot stock and a growing selection of pot grown perennial plants there will no doubt be plenty more besides to entice the curious gardener at other times of year.

For more information about Seagate Nurseries go to www.irises.co.uk