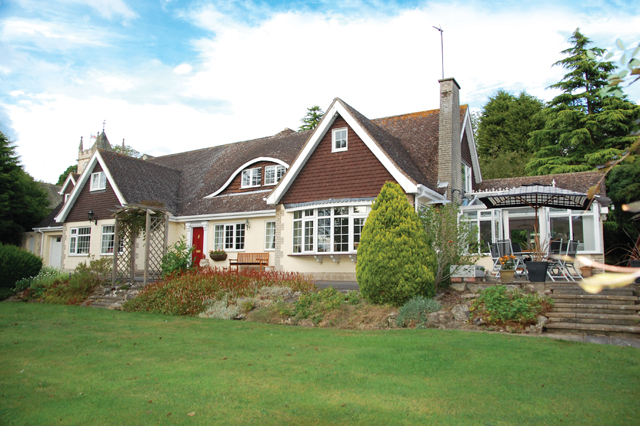 When Jack and Jean Hammond got married in 1998, they walked from their home in Saxby All Saints to the little church just a few steps away.
Situated between the market towns of Brigg and Barton upon Humber in North Lincolnshire, the village of Saxby All Saints had been home to the couple for two years, ever since they first spotted the dormer bungalow on a day out with Jack’s daughters, Louise and Sophie.

“We’d taken my husband’s two youngest children around Cleethorpes and drove through Saxby All Saints because he knew someone who lived in the village from years ago,” said Jean.

“We spotted a ‘for sale’ sign, drove down a cul-de-sac, saw The Hawthorns and made an appointment to view it. It was springtime and the garden was beautiful; it was in a peaceful location surrounded by countryside and the view of the church was lovely.”

The couple immediately put their detached dormer bungalow in Skidby, near Beverley, on the market and were fortunate to sell it within a few weeks. They then put an offer on The Hawthorns which was accepted and moved into their new home in May 1996.

The property was in an ideal location for their commute to work, just twenty minutes across the Humber Bridge in Hull, and they could also leave their car at Barnetby and catch the train to Lincoln or London. The couple, who are both psychiatric nurses, own residential homes for the elderly – The Arches in Cottingham, which they sold five years ago, and Hadley Place in Anlaby Road, Hull, which they still own despite being semi-retired.

“The house was a lot smaller than it is now, but we could see it had potential and that if we extended it, it could accommodate the whole family,” said Jean. Jack has another daughter Tracey, Jean has three children, Kerrie, John and Michael and they have nine grandchildren ranging from eighteen months to eighteen years old between them.

At the time, The Hawthorns, which had been built in the 1970s by the previous owners, was a three bedroom dormer bungalow with a master bedroom with en-suite downstairs, two bedrooms upstairs and a ‘mish-mash’ of bathrooms and toilets.

Once the couple moved in, they opened up the kitchen to create a utility room and dining area leading into the conservatory, which previously could only be accessed from the lounge, and installed a new modern kitchen which Jack designed.

Then they moved the downstairs master bedroom, with its huge brown 1970s bathroom, upstairs by knocking down some walls and creating a en-suite. The downstairs bedroom then became a lounge.

After two years in the property, the couple decided to build an extension which almost doubled the width of the house, creating three further bedrooms, three en-suites, a family bathroom and an extension to the garage. Electric gates were installed at the entrance to the driveway, and an electric garage door as well.

“My husband liked a challenge and wanted to make the best of what we’d got,” said Jean. “Fortunately, all the work was at one end of the house so we still had the original part of the house to live in while the work was taking place.”

Once the building work was complete, the couple set about improving the garden. “When we moved in, the garden was very overgrown with lots of trees that had become too big for the space available,” said Jean. “We thinned out the trees, planted borders and gradually improved the gardens.”

A courtyard area in the garden proved particularly useful for giving their two terrier dogs an enclosed space to run around in.

Now the house is a spacious family home with a contemporary breakfast kitchen opening onto a conservatory, with sliding doors to a covered patio area and pergola with views of the back garden beyond. The kitchen has granite work surfaces, a Rangemaster duel fuel five-ring cooker with double oven and space for an American style fridge. There are also three reception rooms on the ground floor and a games room with separate access, giving the potential for several different uses. Upstairs, there is a master suite with bathroom and dressing room, four further bedrooms, two with en-suites and a family bathroom.

Set in approximately half an acre of landscaped gardens, the house is private, reached from a small lane leading from the church and through electric gates onto a sweeping driveway with parking for several vehicles. The gardens feature lawns, mature trees, shrub borders, patio areas and a walled courtyard.

The house proved to be perfect for entertaining – each Christmas the couple would invite up to thirty members of their extended family and fifty guests celebrated Jean’s 60th birthday in the house three years ago. They enjoyed throwing New Year’s Eve parties for people in the village and getting involved with community fundraising events through the church.

“Each year we have a reunion with all the people we have worked with and we have a pianist playing the baby grand piano in the dining room,” added Jean.

With their children now grown up and all living in Hull, Jack and Jean decided to buy a new build property off-plan in nearby Beverley two years ago. The new house is also near to Jean’s mum Jane Proctor who is now eighty-five years old.

“It was a difficult decision to put The Hawthorns on the market because we love it so much,” said Jean. “But we made a practical decision to move nearer to our family.

“Now we’re hoping a family will buy the house because it’s perfect for children to run around in.”