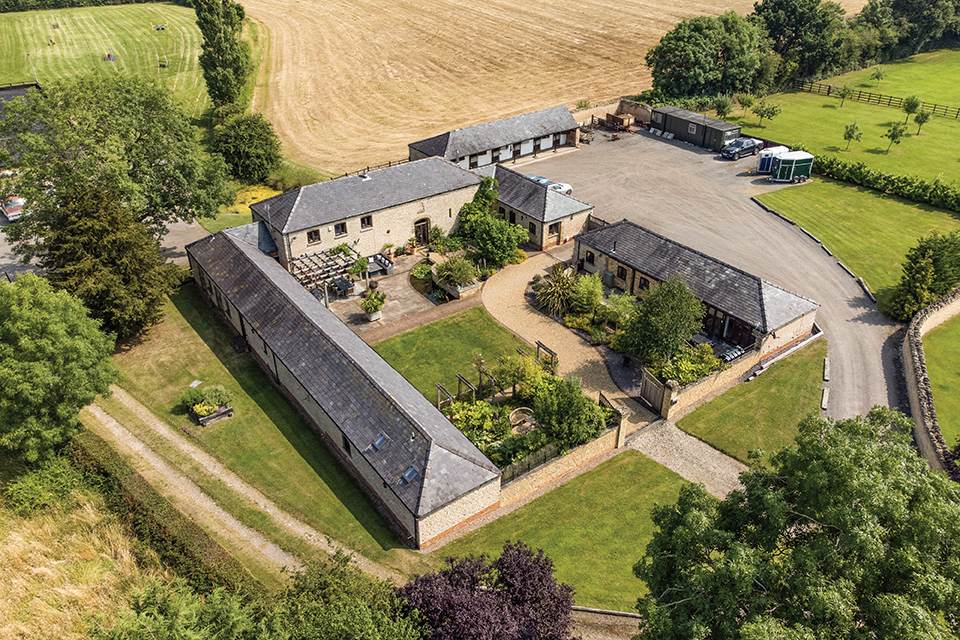 A perfect rural blend of tradition and style

On the market with:

The Old Granary has been transformed into a stunning stone and slate barn conversion home, ideal for families in search of a classic country lifestyle with the bonus of additional income opportunities.

Set at the end of a quiet, tree lined driveway in the rural hamlet of Ashby de la Launde, near Sleaford, The Old Granary, which was originally a collection of farm buildings dating back to the mid-nineteenth century, has been lovingly renovated by vendors Will and Paula Watson into a warm and welcoming family home.

Situated in more than 30 acres of open countryside and mature woodland, this stylish five-bedroom barn conversion also offers a sizable workshop/barn, two further self-contained barns which have been run as successful holiday lets and B&B, as well as a superb range of equestrian facilities which offers a thriving, well established livery business.

Will and Paula moved here 23 years ago and their two grown-up daughters, Gemma and Laura, who have long since flown the nest, enjoyed an idyllic childhood here with their ponies.

“The location of The Old Granary was one of the biggest draws for us,” says Paula. “It benefits from a village location, but the long driveway means that it is still a quiet and secluded setting. The amount of land and the potential for the barns was also something that really captured our imaginations.”

The Old Granary dates back to 1847 and was originally farm buildings which were part of the estate of Ashby Hall, which was owned by John William King.

The couple, who moved from a bungalow in Ruskington, say that even though it was far more than they were originally looking for, they instantly fell in love with the property and its potential.

“We bought The Old Granary as disused farm buildings and have renovated it entirely,” explains Will. “The four of us lived in caravans for two and half years while we were building, which was less than ideal with both a five and eight-year old!

“While undertaking the renovations, we kept as many original features as possible such as exposed stone and brick walls, wooden beams, arrow slit windows, living room door and York stone slab floors.

“Our first project was converting the open fronted cart shed into stables, which Paula’s father (a carpenter) made almost all of the fittings for. We then started on the main house and as soon as we had a bathroom and kitchen fitted, we moved in, but it took about five years until the main house was completed.

“We did most of the renovating ourselves and used local tradesmen for the specialist jobs such as roofers, stone masons and carpenters.”

The accommodation features a welcoming entrance hall with access to a generous home office, shower room and utility room, which leads on to the attractive double aspect 25′ kitchen breakfast room with exposed brick, stonework and beams.

The cosy drawing room is light and airy with floor to ceiling windows, double doors to the garden, exposed beams and fireplace with log burner.

“The living room is one of our favourite rooms because of its fantastic views across open countryside but we also love spending time in the granary because of its ability to be both tall and grand, as well as cosy.

“This is a warm, welcoming home. The underfloor heating throughout is amazing after a cold morning out with the horses, and relaxing in the sunlit courtyard is bliss.”

The first floor is accessed by an oak staircase and remarkable galleried landing which showcases the beautiful beams, leading to the principal bedroom with dressing room and bathroom, and guest bedroom with ensuite shower room.

Adjoining the main barn is a single storey, self-contained, one-bedroom barn with an open plan kitchen/living room and ensuite bedroom.

Across the attractive courtyard, which enjoys a water feature, paved barbecue area and lawn, is another self-contained single storey barn which has two bedrooms, bathroom, kitchen and drawing room with double doors which open onto its own terrace.

Will and Paula agree that the pretty courtyard garden is without a doubt their favourite part of the property.

“It has grown into the most magical place and we have made lots of happy memories here. The garden is south facing and provides a very Mediterranean feel. We have hosted many great summer parties from it.”

Working from home
During their years at The Old Granary, the couple have run several businesses from home, including Will’s commercial catering installation business, with Paula looking after the admin side.

“Over the past 23 years, this property has allowed us to expand businesses, while enjoying the tranquil and beautiful surroundings. Our children have grown up in the most amazing place spending nearly all of their time outdoors, while we have been able to enjoy our own hobbies and pursuits.”

Will has pursued his hobby for cars, both race and classic, from the workshop, which is kitted out with three-phase power and a four-post ramp, ideal for tinkering with any type of vehicle.

“Over the past 10 years we have run our bed and breakfast business, as well as developing our self-catering holiday cottages.

“As soon as we had built the stables (the first job completed!), we started a livery business that has been running the whole time we have been here. This has been a great source of income and helped to fund the girls’ ponies.”

The large gravel driveway leads to the stable block of six, with a covered walkway and a storage area sheltered by a stone wall, plus a further yard with adjoining sheds, and a floodlit all-weather manège.

“Both Gemma and Laura have had lots of ponies and horses at home over the years. They really enjoyed taking part in Pony Club activities, as well as showing, and both worked hard to produce top-class ponies. Laura still rides and has her event horse, King Louis, at our yard. We have offered full, part and DIY livery over the years, but now just focus on DIY clients and have space for five liveries. It has been a great way of earning extra income to pay for training and competitions for our own horses.

“The property is also ideal for cat and dog owners and we have had numerous animals ourselves over the years, including German Shepherd Murphy, who we got from Lincolnshire Police, Labrador Bud, who Will trained as a gundog, and we currently own two Jack Russell Terriers, Gus and Jelly, as well as four yard cats.”

The Old Granary is a special country home where multiple families could enjoy living close together in their own self-contained units. It also has the advantage of providing an income from the holiday lets and livery with further potential income from a wide range of business opportunities including: camping/caravan site, glamping, log cabins in the woodland, or would be ideal as a stunning wedding venue.

“We have enjoyed our years here – watching our children grow up, being able to have all our brilliant animals, with the added satisfaction of turning disused farm buildings into our dream family home.

“Ashby is a small, friendly village with exceptional community spirit; we will be sad to leave and will miss it, but we are planning to retire and downsize and then have plans to travel the world!”