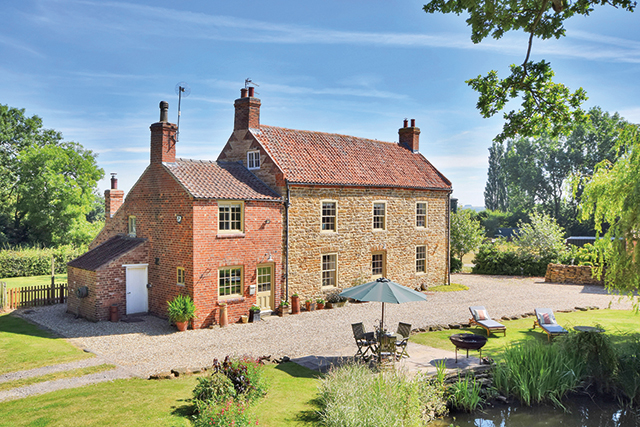 A period, country home perfect for a modern lifestyle

On the market with:
JHWalter, 1 Mint Lane Lincoln LN1 1UD

Cornhills House has the impression of an unspoilt Georgian farmhouse but sympathetic renovation has seen its original features combined with contemporary comforts and convenience.
Current owners Helen and Colin Palmer-Brown loved the house from their first viewing. “It was first built in the eighteenth century,” said Colin, “evidenced by its typically Georgian style and the recovery of a 1702 Cartwheel Penny from beneath the lounge floor when we began work to install underfloor heating. In the late nineteenth or early twentieth century, the west gable was added to, creating a brick kitchen and extra bedroom; there were minor extensions in the early to mid-twentieth century. For a long time, the house was occupied by a local family from the 1950s until about 1980, and one of its residents still lives in the hamlet.”

Helen and Colin were also attracted by the internal charm of a house which retained so many original features. “We had been looking for a ‘canvas’ we could adapt and restore rather than wipe clean; many period houses are over modernised but our aim was for something that would satisfy the demands of modern living but not conceal the past. Even when it came to extending the property in 2006 and 2010, we sought designs that would complement the existing fabric but not conceal the readability of its various mutations over its 300-year life.”

Cornhills House is Grade II listed and set in grounds of approximately 0.67 acres. The accommodation over three floors comprises an entrance hall leading to three ground floor reception rooms, a farmhouse dining kitchen and snug, utility room, boot room and store. A staircase from the hall leads to a master bedroom with en-suite, second double bedroom and family bathroom on the first floor while an original staircase leads to the second floor where there are a further two double bedrooms.

The whole house has undergone a painstaking, sympathetic renovation and had an extension to the lounge in 2006 and the kitchen in 2010 to create beautiful family spaces. Wooden sash windows, working wooden shutters and log burning stoves to supplement the underfloor heating have retained the period character while offering the ease for a contemporary lifestyle. Tiled or wooden flooring is a feature of many rooms as well as original beams and fireplaces.

Helen and Colin have raised their son at Cornhills and it has been a treasured family home. “The house sits perfectly within its detached plot, giving a strong sense of privacy,” said Colin. “The garden is always a nice place to be, even in winter, and when it’s cold outside there is the large kitchen and the larger lounge to enjoy. There is friendly and homely warmth about these indoor spaces. We love the expanse and character of the downstairs. There are some lovely quirky features to be seen, such as intermittent exposed stone walls and some rooms with beamed ceilings. The garden plot is a lovely shape, and it’s so detached and private. The nearby trees attract an abundance of wildlife and birdsong which changes with each season.”

Outside a gravel driveway leads to a triple brick and pantile garaging block and extensive parking courtyard, whilst the lawned grounds include a well-stocked pond, log cabin, glasshouse, vegetable garden, and a plethora of mature trees, bordered by high hedge boundaries.

“The pond was created soon after moving in, and now holds quite a good head of carp, as well as a few tench and roach. A few years ago, we added a third bay to the garaging, thus improving garage/workshop facilities. We also added the summerhouse, which is fully insulated and has its own electricity supply. There is also the large cedar greenhouse; a 1970s frame, erected at Cornhills in 2015.”

There are always challenges when restoring a period house but the Palmer-Browns have always been passionate about this property, and nothing has ever seemed insurmountable. The journey has been an inspiration for them and they will be sorry in so many respects to leave.

Lasting memories of living in this property are many for the couple: “Bringing up our son, who spent a great childhood playing in the garden and in the adjacent spinney. And then there are some great local walks and cycle routes. It’s also a wonderful setting for parties, both summer garden parties and cosy wintery Christmas get-togethers.”

The countryside but convenient location of Cornhills makes it an ideal retreat within easy driving distance of Lincoln.

“It’s rural but not isolated. The property is within easy shout of Burton Waters, and is only six miles from Lincoln, within ten minutes you can arrive in the Bail. Saxilby, with its shops, pubs and other facilities is about two miles to the west of the hamlet. There is a friendly community in Broxholme, where village pride is most evident.”

Helen and Colin already have designs on another stone barn property, once Cornhills House is sold, this time to the east of Lincoln. Their next project could well incorporate a country B&B, business or art studio/gallery opportunity.

What will they miss most about the house? “It’s impossible to conjure up a list, as there are so many things. That said its warmth, its looks, the garden, the stunning sunsets, our friends, and the large entertaining spaces. There’s a kind of silent ambience to this place, and the right purchasers will soon pick up on it.”