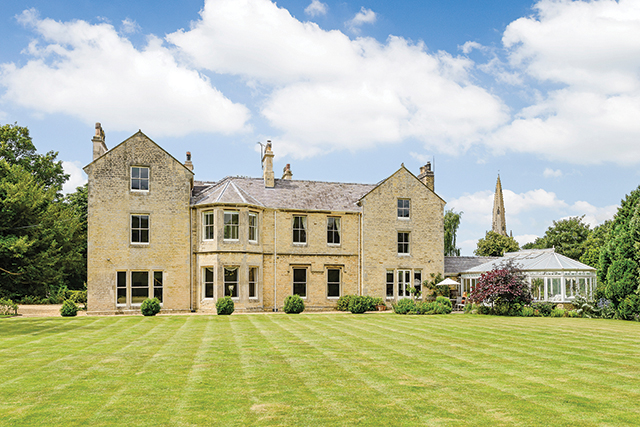 A place for a growing family

On the market with: Savills

When Steph and Tom Thorne decided to move out of London, they longed to find a friendly community in which to bring up their young family. As they tell Sarah Winstanley, Lincolnshire offered just the place.
Pregnant with her third child at the time – their boys are Luke (20), Nick (19) and Peter (17) – the couple had had enough of urban living and wanted to ‘have three boys who could climb trees’.

Steph said: “We had been living in a two-and-a-half bedroom house in Ealing close to my husband’s work for five or six years and were fed up with the noise, traffic and anonymity of London.

“We were looking in Oxfordshire but had friends in Lincolnshire and after we visited them for the weekend, they sent us a link to Welbourn Place. We thought, ‘you can get a lot of house for your money’.”

Immediately struck with the idea of moving to a much larger property in a village location, the couple started exploring transport links and found that the commute from Welbourn to London would be quicker than from areas around the capital. As well as commuting, Tom, who works in App development for a London-based company and also does consultancy work, planned to work from home some days.

Initially Steph viewed the property in the spring of 2000 with a friend. She recalls: “It was like a dream because we were living in a tiny little box with boys who needed space and this house had huge rooms and a garden, which was just fabulous!”

The previous owner, Fran Brealey, who, along with her husband Reg, owns the Petwood Hotel in Woodhall Spa, showed Steph around the house. Steph added: “Fran is a key figure in the local community and having that hand over really made a difference. It felt like coming home!”

Steph revisited to look at schools, then Tom made the journey with her for the first time. Steph said: “Tom was taken by the house immediately. He was more desperate to move out of London than I was and when he saw the house and the space, he loved it. We had some ideas about how we could make the house right for us.”

Welbourn Place, which is mid-Victorian and sits in a Conservation Area, was originally built as a rectory to the nearby Church of St Chad. Sir William Robertson (1860-1933), who the local Academy school is named after, was taught in the house by the parish minister. He is the only member of the army to have risen from Private to Field Marshal at a time when the strict class structure prevented aspirational movement through the classes.

It is believed that the house was derelict when Mrs Bridget Vere-Laurie inherited it just after the war and restored it.

In October 2000, Steph and Tom moved all their belongings out of their London house in one lorry. “We had very little furniture,” said Steph. “We moved around bedrooms at first because it took us a long time to work out which rooms we wanted to live in.”

Soon after they moved in, Steph gave birth to their third child and Tom broke his back and spent more time working from home. Although they decorated their new home and did basic repairs, it was ten years before the couple embarked on any major work.

To create an open plan kitchen, the ground floor part of a servant’s staircase was removed along with a pantry. The work meant that access to the wine cellar was lost, but Tom came up with a plan to have a gas-sprung hatch in the floor instead. Local kitchen maker Alan Richardson from Richwood Cabinet Makers, Cranwell, made the kitchen with doors replicating the original design of the pantry door, to reflect the history of the house.

A new roof and skylight were installed as well as a wifi system for Tom’s work. Upstairs, bathrooms became bedrooms and vice versa and Steph got her dream walk-in wardrobe, which was also made by Richwood Cabinet Makers.

Three or four years ago, the couple created an additional patio area in which they could enjoy the afternoon and evening sun. “We chose to screen off the house from the gate with a horn beam hedge,” said Steph. “We have tried, as much as possible, to use plants rather than hard landscaping so everything is quite flexible.”

A bathroom and shower room were fitted for the children, an office created off the kitchen for Steph and windows from the kitchen to the patios were changed into doors. The house has been completely redecorated with moulded cornices, coving and shutters repaired where necessary.

Now on the market, Welbourn Place is described as a 10 bedroom stone house set in 2.5 acres of grounds at Welbourn, 12 miles from Lincoln. The property has five bathrooms (one en suite), six reception rooms, a conservatory and cellar and is brimming with period features including tall ceilings, sash windows, original stripped wooden floors and ornate fireplaces.

Of particular note is the kitchen breakfast room, which features a green Aga and double doors opening onto the east terrace. The first floor has a master bedroom suite with dressing room and en suite bathroom, a further five bedrooms, two family bathrooms, a shower room and laundry. The top floor has a further four bedrooms and a bathroom with attic storage.

Steph has spent many years working in the garden which features manicured lawns, outbuildings and a renovated glass house. She said: “The late Ian Groves, a great gardener who had worked for the National Trust, taught me how to garden. It was a big thing for me as we had only ever had a little stamp of a garden in London before.

“Now my big passion is the garden more than the house. I love watching things grow and have put in quite a lot of specialist plants including a standard pink wisteria on the front lawn. I love the formality of evergreen and box hedging and the old skills of pleaching and topiary.”

The family have enjoyed some special times in the house. They hosted the village fete there for several years and recently Steph celebrated her 50th birthday with around fifty guests enjoying a sit down meal. Her 40th birthday was held in a marquee in the grounds as well.

Over the years, Steph has thrown herself into the local community and works voluntarily recruiting new magistrates on the Lincolnshire Advisory Committee. She is also involved in Kesteven Children in Need, a Lincolnshire based charity supporting local children at home and at school, and the English Speaking Union.

Now however, with their eldest son at university and another studying for his A levels, Steph and Tom have decided to put Welbourn Place on the market. Steph said: “We can see a time when there will be just two of us and we won’t need all this space so we have decided to downsize but stay in Lincolnshire in the community that we love.”