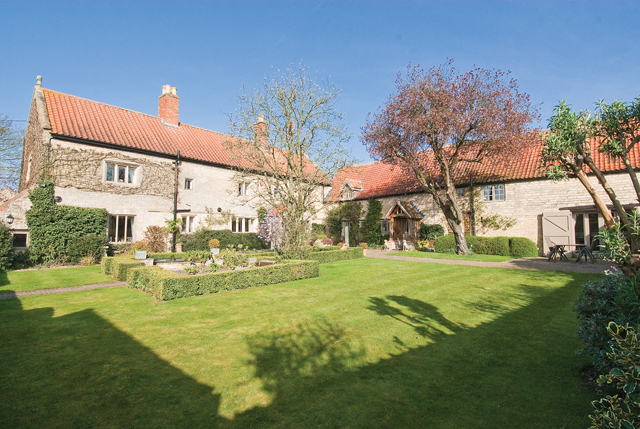 A privilege to own this historic home

When Graham and Lesley Secker bought The Close at Wellingore, near Lincoln, sixteen years ago, it was their first home together.

The Grade II listed property had a homely feel, had easy access for Graham to travel to work and, importantly, was large enough to accommodate the furniture from both their houses.

Lesley said: “When we found the house, it wasn’t in quite as good a condition as it is now, but it had a friendly feel to it, an interesting history and was in a beautiful village.

“We just loved it and once we had bought it, I embarked on learning about listed buildings and house renovating. I’d never done anything more than a coat of paint before!”

When the couple bought the property in December 1996, Graham had been living in Manthorpe, near Grantham, and was the managing director of Cargill PLC, part of the US multi-national Cargill Incorporated; Lesley moved from Weybridge in Surrey and had worked in the law department of the same company prior to her move to Wellingore.

“Graham travelled extensively for the company and had a European office in Swinderby, near Lincoln, so we decided to make this area our home,” said Lesley.

After marrying in September 1996, they found The Close and moved in on 18th December of the same year.

“The house had quite a lot of pine panelling and woodchip wallpaper and needed love and attention and to be brought into the next century,” said Lesley. “We moved into the house straight away and moved from room to room as the work was being done.”

The house has an interesting history, as the Seckers believe it was built in two parts. The main house was built in 1625 and the L-shaped part, which would have housed the kitchen, was added in the 1640s.

“Local hearsay leads us to think it was built for the Catholic priest for the Neville estate as there was a Catholic chapel opposite the house which was part of Wellingore Hall,” said Lesley. “The architect felt the house was built for someone with standing in the community because it has higher than average beamed ceilings.”

The house had stood empty for several years before being sold by the Neville family in 1968 to Roger Charlton, who was in the RAF, and his wife Jacqueline. It was sold twice more before the Seckers bought it from Geoff Rudge, who was the finance director of GEC Alstrom (now Siemens) in Lincoln, and his wife Sharon.

Once the Seckers moved in they embarked on an extensive renovation project installing new bathrooms and en suites, a new kitchen and creating a guest wing separate from the main house.

“The guest wing is ideal for a family with teenagers who want their own living space, for people wanting staff like a live-in nanny or just for visitors to enjoy,” said Lesley.

The indoor swimming pool was completed in September 1999 just after the couple’s daughter, Hannah (now fourteen) was born.

Lesley said: “Hannah went for her first swim in our pool at six months old. By the time she was five she was a proficient swimmer and even completed a one-mile swim at Cranwell swimming pool at the age of seven.

“Just recently she invited a friend to stay and fulfilled one of her dreams of having a midnight swim with just the lights of the pool on.”

The stone-built house has five reception rooms, a study, five bedrooms, three en suites and a family bathroom, an indoor swimming pool and a double garage. It is brimming with original characterful features including fireplaces, stone mullion windows, beams and a separately listed sundial in the garden.

Lesley said: “We are very fortunate that the people who bought the house in 1968 didn’t remove any of the original features prior to it being listed in the 1980s.”

Some of the most interesting features of the house include a Jacobean-style stone fireplace in the drawing room with inset mantel and dog grate, which is believed to be original, and a period inglenook fireplace with bressumer beam and an original bread oven in the snug, which is thought to be the original kitchen.

The kitchen is fitted with bespoke handcrafted, solid oak units, granite work surfaces and an oil-fired Aga. The family/garden room has a more contemporary feel with double-height ceiling, oak floors and doors leading into the south-facing garden and access to the swimming pool.

The family have lots of happy memories of their time in the house including Hannah’s christening in 1999 when she was wheeled to the church in a large Silver Cross pram. The vicar, John Patrick conducted the service and also came back to enjoy the party in the garden.

Lesley added: “This is the most amazing Christmas house. We’ve had parties most years for our friends and colleagues. This year we had a Christmas drinks party for over sixty people, with a pianist playing the baby grand piano in the hall.”

Five years ago, Graham retired from his role at Cargills PLC to take on the role of chairman of the board of governors at the University of Lincoln. He stepped down from this role last summer but continues his involvement as pro-chancellor.

For the last six years, Lesley has been a parish councillor in Wellingore where, among other things, she helped to gain funding for, and designed, the village bus shelters. The oak framed and wood clad traditional buildings were built by Heritage builders Wild Boar.

With Hannah and Lesley’s two horses currently in livery elsewhere, the couple have decided the time is right to move on and have placed The Close on the market. In October last year they bought a barn conversion at South Rauceby eight miles away, which they intend to move into only once The Close is sold.

Lesley is currently project managing the refurbishment of their new home which is being undertaken by builder, Steve Francis of Welbourn. It will feature two bedroom suites and two guest rooms with a family bathroom, four reception rooms and a thirty-two-foot living kitchen, together with ten acres of land which can be viewed from the kitchen and master bedroom windows.

Lesley said: “The Close has so much character. It’s a one off and has a really good feel about it, so it took two years for me to be brave enough to put the house on the market and the only reason for moving was because we wanted our horses stabled at home.”

She added: “During the last 400 years, The Close has been a home to many people and is full of history. We feel very privileged to have been a part of this.

“We now want to hand the house to the next custodian for them to enjoy it as much as we have.”