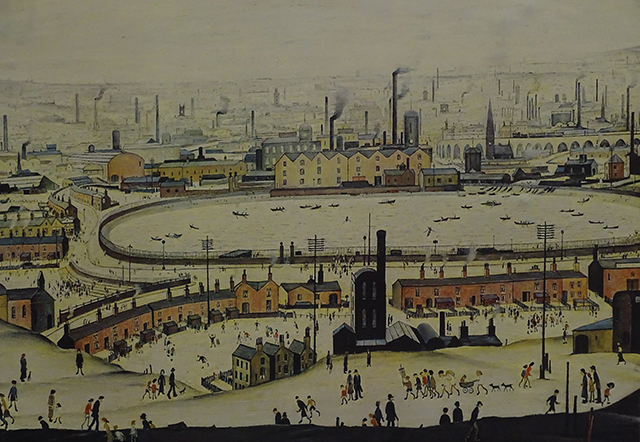 A return to the Northern School

By William Gregory MRICS, Golding Young and Mawer.
The Northern School of Artists is loosely based around Peter Davies’ 1989 book, which detailed Lancashire artists of the 20th century. Here we look at just four.

To most, the Northern Artists are headed by LS Lowry, whose early life and work developed his connection to an industrial neighbourhood and people. Lowry’s works now make millions and even his artist signed prints command four figures.

Helen Layfield Bradley (1900-1979) produced works based on the fictional figure Miss Carter going about her business in the north west. Bradley’s works, often accompanied by a descriptive verse, recalled her childhood experience of an Edwardian era. Bradley’s oil paintings have sold for over £100,000 at auction, and her artist signed prints regularly appear at auctions.

Geoffrey Key was born in Rusholme, Manchester in 1941. His works are bold in colour and form, depicting a narrative on the people and places around him. Themes of landscape, people, horses and still life have dominated certain times, but always in the same bold manner; this variety of subject matter allows the buyers to personalise collections. Auction results now exceed £10,000 although prices tend to be between £2,000-£4,000.

William Ralph Turner’s (1920-2013) work came to prominence late in his life with collectors starting to bid on his paintings at auction from the early 2000s. Prices started at a few hundred but have increased, with the top price at auction recorded at £14,800.

All the pictures illustrated are included in the Golding Young & Mawer Fine Art Auction scheduled to take place on 28th August 2019.