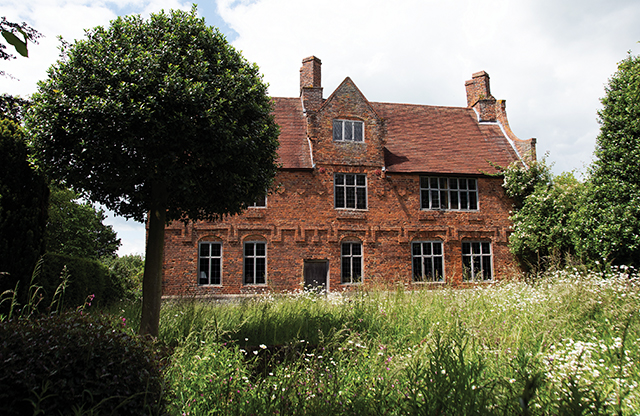 A couple of hours spent in conversation with a remarkable, deep-thinking man in his garden proved a rare privilege. At first meeting, Alan Baxter appears retiring – yet he has never retired! He grew up in Liverpool during World War Two. Several years as an apprentice at Hastings, the vast Humber works in Coventry, fuelled a life-long love of cars and good design. However, he changed tack to study structural engineering at Bristol University and by 1974 had set up an independent practice in London, Alan Baxter Ltd. They successfully built a reputation for innovative solutions to clients’ needs in both writing Conservation Plans for nationally important structures, and sensitive repair and adaptation of historic buildings.

I first became aware of Alan’s name some 20 years ago when attending regular meetings of the Association of Gardens Trusts and the Garden History Society. In 2015 both conservation charities merged as The Gardens Trust (Alan is now a vice-president). His Clerkenwell office’s dedicated gallery space provides a venue for lectures and exhibitions, and office space to a community of businesses, charities and special interest groups involved in the built environment. This attracts talented people who then benefit from professional development and training.

Alan was restoring (what he calls) an ordinary, outlying Manor House of the Grimsthorpe estate in Aslackby, an appealing village just off the A15 in the rolling, verdant scenery of south Lincolnshire. So, in 2008, when Alan opened the garden in aid of the Samaritans, I walked the ground one early summer evening. Here was a significant, sustainable turn of the 21st century garden in perfect harmony with a fascinating medieval house. I vowed to return to learn more, which I finally managed last September!
The entrepreneur had never visited this part of the Midlands. “I went looking for white elephants for sale.

Lincolnshire was full of white elephants at the time.” He came across this rare architectural gem in 1976, long since extended by post-Restoration Fen Artisan craftsmen in a most flamboyant manner, with probably the best brick gable ends in the county. It had unusual early touches of asymmetry, with no real garden, just intriguing footings of a small lodge to the east. However, the house was on its last legs – just the challenge for a problem-solver passionate about conservation.

“It was immensely bleak – the field came down to privet hedge with mangle wurzels fighting up the path to the front door. I came round the corner to a real strong sense of place with the barn. Aslackby has interesting geology, a combination of the end of Oxford clay meeting the beginning of limestone. There were 16 ponds beyond, obviously the original source of clay to make the bricks for the house, but filled with rubbish.” Alan made sense of this spoil by constructing a viewing mound to scan the wider landscape beyond. “Wonderful cloud-scapes!”

He adds: “Understanding place makes it work. The first thing was the beech hedge. The ground was incredibly stony.”

A narrow opening in the high hedge offers an enticing glimpse to a wildflower meadow stretching towards the mound. This vertical slit, a window to The Mount beyond and the sky above, creates a vista and a daily delight from Alan’s kitchen window.

Passing through the opening and turning right, you chance on another, surprising, narrow entrance to a reflective green, ‘sorbet’ space, his restful Italianate water garden. “Come from the side, not full-frontal!”

Alan once led a summer school at the Renaissance Villa Lante for Prince Charles’s Institute.
“Making a garden is a long-term commitment, so different from other arts.”

Nearly all the trees in the garden are Alan’s, including two long, shady avenues, west and east, to enclose the wildflower meadow. “That wall over there is probably 17th century,” Alan gestured towards a wall by the ‘Screen Gate’ now virtually hidden under a magnificent rose, ‘Kiftsgate’. “It takes time to find out what things were about… to see it in different lights.”

We sat for a while beside the old barn, heavily laden with another climbing rose intermingled with dark purple clematis. Here, looking towards the orchard where once was a vegetable garden, doubtless with thousands of lettuces, he explained his unusual ‘Perennial Parterre’, a simple four plots intersected with paths against the backdrop of immense beech hedge. Each bed is filled with a fascinating mix of towering, textured exotics, humming with pollinators.

“This emerged step-by-step. I like things being giant, but it is so easy to overdo it. Know when to stop. It’s stultifying to put a garden in all at once. Let it evolve – do it as you go along. Pretend to be a tree three feet to the right. Feel the ground with your feet, like Christopher Alexander. Sense both light and shade.”

The British-American architect and influential, human-centred design theorist reasons that users are more sensitive to their needs than any architect could be. Alexander’s best known, perennial-selling book is A Pattern Language (1977). Another source of inspiration has been the designer and trompe l’oeil mural painter Alan Dodd, known for doing new work ‘in keeping’ with historic and sensitive architectural settings.

Lean and tall, Alan wears his knowledge lightly, a recognised pillar of urbanism; the study of use, movement and vistas in inner-city settings. His good benches are in good places. Clipped yew hedges in easy, enclosing spaces on the east side. Here, instead of lawn terrace, Alan has recently experimented with a contrasting wildflower meadow. The massed swathe of blue cornflowers set against terracotta-coloured brick building works well. He shares his thoughts generously. They kept coming, in language that any novice student would understand.

“The house flows together with the garden. The garden flows with different walks, that open up to other walks. I don’t want to spoil it.” A simple choice of words by way of explanation belies the complexity of observant thought processes and decision-making. His attention to getting atmosphere, ‘feel’ and ‘flow’ right in both inside and outside space has paid dividends.

In one secluded corner, a mysterious obelisk is guarded by a pair of stone dragons, supporters of the arms of the City of London. On the walled west side, near the kitchen, the herb garden wafts fragrance for the sitting area for easy entertaining. The terrace becomes an outside-living room in the summer, shaded from full sun by an enormous yew.

A lifetime’s experience, with some “happy accidents along the way”, has been poured into the manor house’s long, complicated restoration and the creation of its now sublime garden. At the same time, thanks to his dedicated leadership, with sympathy, integrity and patient focus in spades, Alan’s wide-ranging company has been involved in award-winning urban regeneration schemes: the Everyman Theatre in Liverpool, Maggie’s Centre Oxford, Hull History Centre, Brooklands Museum. In 2016 they won the most prestigious RIBA Stirling Prize for Damien Hirst’s Newport Street Gallery in South London, involving a terrace conversion of Grade-II listed industrial buildings, formerly theatre carpentry and scenery painting workshops. It has also been a key player in other cultural developments including the East Wing of the National Gallery and the Royal Academy 250 Masterplan project.

Alan has set up a charitable foundation to advance the education of the public in all aspects of the built and natural environment, providing research grants to students. Meanwhile his firm’s impressive list of accomplishments continue: from London Bridge to King’s Cross to Crossrail, and then to the delicate repair of both Westminster Hall dating from 1097, later becoming the House of Commons, and St Stephen’s Hall, completed in 1297.

Here in Lincolnshire, on a much smaller scale, Aslackby Manor is now totally ‘wedded’ with its evolving ‘unforgettable garden’, but just as deserving of being right-royally celebrated – as doubtless will be Alan’s next ‘space’ project in progress: a small park on a small farm nearby, complete with lake, walks and vistas!

The Gardens Trust is at present running a three-year project ‘Unforgettable Gardens’. See www.thegardenstrust.org.uk In line with this, Lincolnshire Gardens Trust has chosen to rename its Annual Garden Photo Competition with the same theme. Email entries to shieldssb@aol.com. Closing Date: 14th October 2022. Winning photos will be published in Lincolnshire Life January 2023.