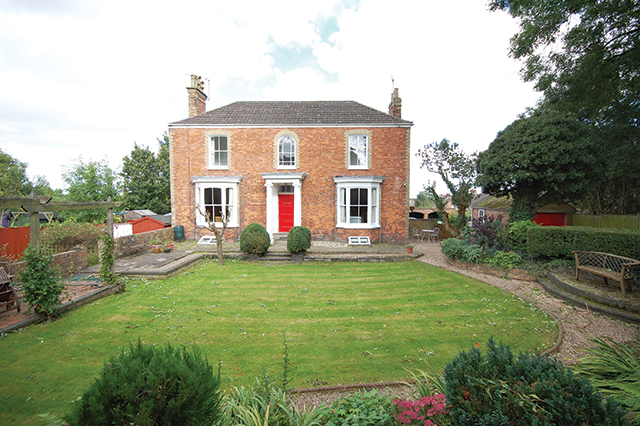 A town house for memorable times

Raising their family and making the most of the adaptability of the layout, decades have flown for Joyce and Paul Martin in their elegant period home.
It is nearly thirty years since Joyce and Paul bought Time House in Louth as their family home. Formerly known as Fairholme, the property had been used as boarding accommodation for Louth Grammar School before it and the adjoining buildings were split into three residential properties in the late 1970s.

“Our daughter was just over one the day we moved in,” explained Joyce, “and it is vivid in my memory because it was also the day she stood by herself for the first time. It was Paul’s idea to change the name to Time House. We had fallen in love with the property and our plan then to stay here for many years has certainly been fulfilled. Louth is also on the Meridian Line, so the name seemed a perfect choice to us.”

The house dates from the 1840s and was built with Georgian styling and symmetry, having a central, pillared front portico above which sits a charming arched window. To either side of the entrance are bay windows, above which are two rectangular windows. Below the bay windows are awning windows which give the first hint that the house is built over three and a half storeys, with the front elevation at a higher level than the rear.

The Martins were not daunted by the work which needed to be done to bring the house up to their specification and they have continued to make their own adaptations and improvements as their family of now three children have grown up.

“We have replaced the kitchen and added a second bathroom. The room which is now the study was originally the boiler room but over time we have used it as a playroom, then a guest annexe and now as our study. The flexibility of the internal layout is one of the reasons we have been able to stay here for so long,” said Joyce.

Relatively recently the Martins had the original pine floorboards stripped, revealing their beautiful quality and natural colour, especially in the daylight which floods the house from the expansive windows.

Accessing the four bedroomed house from the panelled front door brings you onto the ground floor, centre of the house, into an impressive hallway with elegant high ceiling, where the return staircase rises up to the first floor and leads down to the lower ground floor. To either side of the hallway on the ground floor are a living room and drawing room.

The beautifully proportioned drawing room features a working Minster Stone fireplace and bay window, while the living room has the same impressive ceiling height, bay window and a fireplace with tiled inserts. The first floor comprises a landing and four bedrooms. The upstairs WC and bathroom are on a half landing. On the lower ground floor a rear hallway leads to a large dining kitchen, dining room, bathroom and study (or fifth bedroom).

“I have never tired of the hallway and the beautiful arched window which overlooks the stairwell in this house. It still reminds me of Play School, a BBC children’s programme which was on TV when the children were young. We had our own arched window to look through every day. I appreciate the luxury of scale of Time House, which modern houses do not deliver. I have always felt so lucky to live here,” said Joyce.

Internally, the decoration of the house is in neutral whites and greys with period features such as dado rails, picture rails, decorative plasterwork and cornices lovingly retained, maintaining the charming character of the house. The styling achieves the delicate balance of contemporary tastes with period charm.

The walled gardens were overgrown thirty years ago and have been landscaped to make the most of the south-west facing aspect. There is a choice of different seating areas within the garden, including a breakfast terrace, ideal for catching the early sunshine as you start the day. This area is reached by steps leading up from a gravelled pathway. The mature gardens also include a pergola and espaliered cherry, pear and apple trees and gravel pathways. Within the grounds there is also a brick built garage and parking for up to three cars.

Time House is located off a private driveway in a quiet residential area of Louth, only a ten to fifteen minute walk from the town centre’s attractive shopping and amenities.

Joyce went on to say that all their children benefitted from the easy access to the town’s excellent schools and strong sense of community: “They have built networks and friendships for life and we always knew there would be someone they could call on once they had left the house. We have made so many memories here but now that our family have flown the nest this is the right time to move on.”

Paul and Joyce have not decided where their next home will be. At present Paul commutes considerable distances with his demanding job. Joyce’s work is home based, so there is flexibility as to where they will relocate but wherever they settle next, they will both look back with great fondness on Time House.