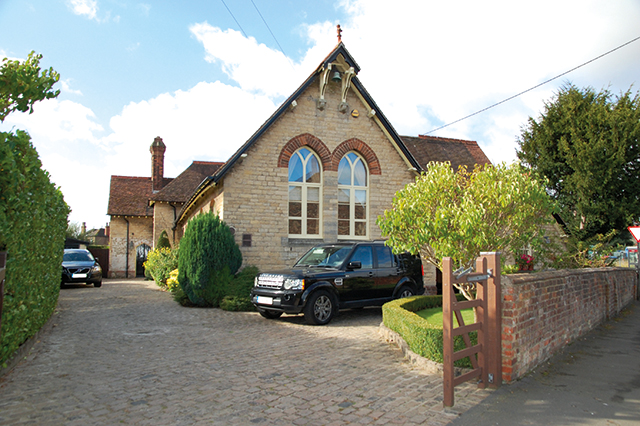 A Victorian house of the old school

When Ruth Wilkinson and Kate Vickers spotted this property at Hibaldstow in North Lincolnshire, they knew it would be their future home.
The couple, who were living in a modern terraced house in Buckinghamshire at the time, needed more space to accommodate themselves and their growing IT business, Karu Ltd. With contracts in Scotland and the south of England, their search wasn’t restricted to a certain area but their requirements were a little unusual as they wanted more downstairs space than upstairs.

“As soon as we saw the house I knew we were going to live there,” said Ruth, who is the operations director of the business. “It was large with over 3,000 square feet of space. Historically the headmaster’s house would be built in the grounds of the school but for some reason, this house was attached. It meant we had the Victorian house at one end of the property and the Great Hall with its 19ft high ceilings at the other. The downstairs was three times the size of the upstairs, which we liked.”

She added: “We drove up for a viewing in November 2001 and stayed in a B&B in Market Rasen. I remember not being put off by the windy roads, the fact it was very dark and raining. I had always wanted to live in a house with golden and yellow stones and despite all of the bleakness of the weather, this golden house shone out.”

Built in 1873, the Old School House was a school until 1980 when it was bought by the New Life Church and used as a place of worship and community centre for twenty years. In 2000, it was purchased by a couple who applied for planning permission to turn it into a domestic dwelling by joining the Victorian headmaster’s house to the school building. In 2001, Ruth and Kate spotted the building for sale and five months later, they moved in.

“The house needed a custodian and a bit of TLC,” said Ruth. “We lived in it for quite a while before starting the renovations because we wanted to make sure whatever we did was sympathetic to the building.”

One of the first projects was to restore the original windows. Ruth said: “The house isn’t listed so technically we could have replaced the windows more cheaply by bringing in a double glazing firm but we wanted to preserve the integrity of the building by keeping the original oak windows. The oak had been in there for 125 years and very little was wrong with it, except a little water damage.”

Next the couple installed a bathroom upstairs, decorated the bedrooms, restored the sitting room at the back of the house and turned the old scullery into a laundry room. In the Great Hall, a partition was removed, the hall was painted and decorated and turned into a homely space.

Ruth said: “During the first year, we saw that people in the village were really curious as to what was going on inside the house. So we threw open our doors for a jacket potato and chilli night and eighty-eight people turned up! It was brilliant and entrenched our core beliefs of belonging to a community. We got to know a lot of people including local tradesmen, craftspeople and builders who have become our friends.”

The renovations continued with a garden room built in 2007 and in August that year, the couple held their civil partnership in the Great Hall with sixty-eight guests attending the ceremony and 125 during the evening.

“I’d always wanted to walk from the church to home when I got married and all our guests walked through the village in their hats,” said Ruth. “It was a beautiful day.”

In the kitchen, the floor was dug up and half a tonne of concrete was poured in to support the Aga. Ruth said: “Throughout the work we decanted to one or the other end of the house. We still had the boys and girls’ toilets and shower rooms to use for a shower. On the day Prince William and Kate got married in 2011, we had a leak and we were running past the TV with buckets saying, ‘Lovely dress!’

It took ten years in total to complete the renovations – an estimation which Kate, a business analyst, change management specialist and GDPR consultant, had predicted – and two milestones which stood out were installing cabling and Internet access in the office to enable them to video conference, and a sound system in the Great Hall.

Over the years, the couple’s business has gone from strength to strength and they have thrown themselves into supporting the local community. Recently they have been involved with a team of people from the village who have raised £11,000 towards renovating the rooms in the Lynsey Lodge Hospice in Scunthorpe.

Their business, Karu Ltd was one of sixty-seven from across Lincolnshire to receive an Investors in Education Award in recognition of their exceptional work with schools and young people.

Ruth said: “I think the fact that the business has thrived is because the house has afforded us the opportunity to think a bit more cleverly when no solution is obvious. For example, it would have been easy to double glaze and rip out which would have been okay for now, but we wanted to renovate to reflect the building and for the work to last for generations.”

Now the house is a testament to their dedication over the years. The focal point of the house is the stunning Great Hall with its 19ft high vaulted ceiling, exposed roof timbers, double height windows, polished wood floor and wooden staircase with gallery balcony. All the ground floor accommodation leads from the hall including the other reception rooms, garden room, breakfast kitchen, office, study and ground floor shower room. There are four bedrooms, a bathroom and shower room on the first floor.

Outside the house is approached via a cobbled driveway; there is a private landscaped garden with Victorian vegetable garden to the side and a single garage.

The couple share their home with their two dogs Cassie, a Red Staffordshire Bull Terrier, and Ben, a Jack Russell terrier, who they rescued from Jerry Green Dog Rescue in Broughton, near Brigg.

Although they have enjoyed their time in the Old School House, Ruth and Kate are now ready to embark on the next chapter of their lives. Four years ago, they purchased a bungalow with a vaulted ceiling and manageable garden in Hibaldstow, which they rented out. They are now in the process of applying for planning permission to turn it into a stunning home for the next phase of their lives.

Kate said: “We will be sad to leave the Old School House as we have invested so much energy and emotion into it but we recognise that we need to go on to the next chapter of our lives.”

The Old School House on Redbourne Road, Hibaldstow, North Lincolnshire is on the market with Brown and Co with a guide price of £500,000. For more information contact the estate agents on (01652) 654833.