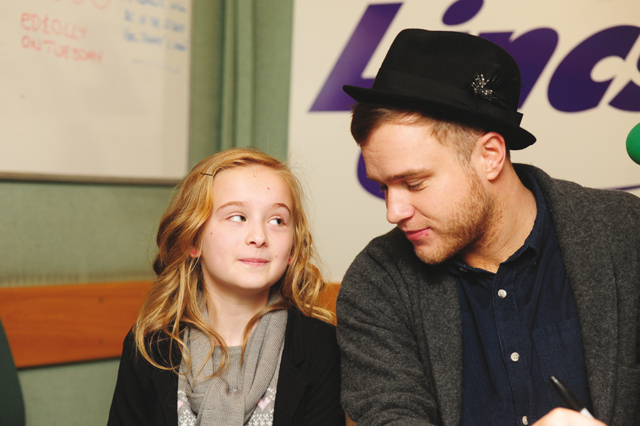 Lincolnshire’s most listened to radio station, Lincs FM 102.2 kick-started 2012 with a new Breakfast Show, a fresh website and a mobile phone ‘app’.
Sam Kirk has settled in as the new voice of the Breakfast Show, waking up the area. The twenty-five-year-old joined the team having previously worked elsewhere for the Lincs FM Group in the East Midlands. He is a graduate of the University of Lincoln and caught the radio bug at the university’s own radio station, Siren FM. To launch the new Breakfast Show, Sam was joined by some big name celebrities. One Direction joined him for a chat on his very first show, while most recently X Factor winner, Matt Cardle got up early and co-presented the show live in the studio, answering listeners’ questions.

It’s the second time in recent months that Lincs FM has brought Matt Cardle to Lincolnshire. Before Christmas he performed an up close and personal gig for the station’s listeners at the newly opened Baths Hall in Scunthorpe.

Other big names who have come to the county to drop in on Lincs FM include JLS – they came just before Christmas, although they had to sneak in through a secret doorway after hundreds of fans gathered outside the studios to greet them but ended up blocking their way in instead! The fans started to arrive at 6.30am, even though the group’s arrival wasn’t expected until 4pm. They helped co-present the Afternoon Show, with presenter Rob Hammond. The fans weren’t disappointed though, as after the interview Aston, Oritsé, JB and Marvin went outside to sign autographs. One lucky Lincs FM listener, Nicole Heaton, got even closer to the boy band, having won an on-air competition for her and a friend to be in the studio during the interview and to meet the band members personally, getting photos and a signature or two as well!

Olly Murs has also been in to co-host the Breakfast Show, and promote his new album, ‘In Case You Didn’t Know’. Olly’s a genuinely friendly guy, who charmed lucky Lincs FM winner, Lucy McKenzie from South Hykeham – although she had already made a good impression with Olly by baking him a cupcake. Lots of listeners texted and tweeted to say ‘hi’ to him and the beauty students at Lincoln College even offered him a free massage, which he seemed very keen to try!

If you missed any of the celebs on air, or want to catch a sneak peak behind the scenes then visit the station’s galleries page on the website for photos, videos and to hear the interview again.

Also new for 2012 is the revamped website. www.lincsfm.co.uk gives visitors the chance to see for themselves the faces behind the microphone, as well as the chance to listen live and find out more about the songs we play. They can also get the latest news and sport information, what’s on listings, download our podcasts (including our popular weekly Farming Programme) plus loads more.

Android phone and iPhone users can also carry Lincs FM with them wherever they go, thanks to the new Lincs FM App. The app is packed full of extra features including weather and travel news, information about school closures and local events around the area. You can also interact with us directly and download any track you’ve heard on the air!