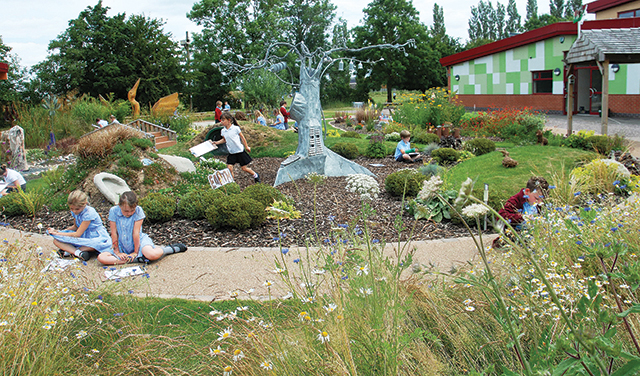 All you need is love!

Steffie Shields pays tribute to head teacher Mike Schofield on his retirement from Boston West Academy.
Some readers may recall, a couple of summers ago, that I highlighted Boston West Academy amongst several ‘Cool Schools’ opening, to show-off their colourful, diverse, gardens to the public for the first time. I make no apologies for revisiting this incredible, good news story. This tale began at the turn of the Millennium, autumn 2000, when an experienced head teacher was drafted in, a few weeks before the school fell into Special Measures.

With some pupils’ behaviour and community relationships poor, a challenging prospect, Mike Schofield turned to the children themselves, listened and gave them a voice. He then responded with action to build their confidence and feelings of self-worth, his mission to provide them with ‘the best’ education under the banner ‘Working Together for Success’ – “…after all, it was their school and their future!”

A persuasive, ambitious communicator, Mike determined to develop the school’s mundane though quite spacious setting on the rural edge of town: the usual large, grey concrete playground, green grass and a copse of trees. He aimed to achieve the best out-door classroom in the country, working tirelessly to sell the concept, raising funds from local business, building and gardening contractors, conservation and community groups.

He said: “The grounds had great potential… the ideal vehicle to begin changing the whole culture of the school. Children learn best when engaged in a range of meaningful, hands-on learning experiences …our special word is ‘care’ – for self, each other and the environment.”

In the meantime, Mike also found himself a wife. The new Mrs Schofield, Emma, a promising and innovative young teacher had joined the staff shortly after his appointment, and soon became a significant part of his action-plan. Already passionate about school gardening, she had made a stir with a Millennium Dome of painted cobbles at Mablethorpe Primary. No surprise that she found a wildlife enthusiast head teacher – and one who wears a Beatles tie – attractive! Together Emma and Mike developed their “Let’s get out there and make a difference!” philosophy. They established an Eco-Club with Eco-Days at weekends “creating wonderful occasions when the whole school community rolled up their sleeves to ‘get stuck in!”

I first met Mike Schofield, when he welcomed Lincolnshire Gardens Trust (LGT) members on a visit. I remember spotting a unique sculpture, a Phoenix, in the corner of the Reception. This school logo had been produced during a chainsaw carving demonstration by sculptor Mick Burns, based at Hackthorn. Mike talked of his vison for the school and led us to a notice which proudly announced a whole range of sponsors and £100,000 already raised in the two or three years in his charge! He could afford calling in a professional landscape designer to create a wildlife pond beyond the grove.

The school had already attracted the attention of the Conservation Foundation founded by TV naturalist David Bellamy. Two confident Year 6 children were detailed to show us all the outside improvements. Some parents were hard at work filling raised wooden beds with earth, some already full of flowers, herbs, vegetables and handmade scarecrows, others with plants to taste, smell or touch. We inspected the gate that Emma had tactfully suggested that LGT donate as a symbolic feature. This was to signal to the children that every time they passed through, towards the countryside and under the trees, they were on a journey of discovery and adventure. A lush willow arbour and maze reminded me of the safe and shady bamboo den I played in as a child. Nearby, a multi-coloured metal ‘tunnel of life’, a meaningful kaleidoscope had single words writ large to contemplate: ‘success’ –‘happy’ – ‘caring’ – ‘fortunate’ – ‘peace’ –‘respect’ – and so on. As it happened, these prophesied the school’s remarkable transformation in the next decade.

Their lovely daughter Isabella, ‘Izzy’, was born and soon came to join the school as it expanded from 240 to 480 pupils. Seven Eco-Schools Green Flags were awarded. In both 2008 and 2012 Ofsted examiners found standards high, pupils attitudes and behaviour outstanding, with parents supportive and the school oversubscribed. I watched with interest as the whole setting was transformed beyond recognition into a rainbow trove affecting every aspect of school life. I witnessed how practical activities make learning ‘real’, enjoyable and meaningful for each child. Mike kept reminding his happy band of ecowarriors: “If you believe, you can achieve!” A small chicken coop is now sheltered beside the grove with a Garden of Reflection beyond, where a low-lying dragon sculpture provides a curvaceous bench, long enough for a whole class. Their skills developed with a range of ‘hands-on’ gardening and bush-craft activities. Yet another outside classroom, the ‘Mud Factory’, with a range of pots and tools, sets children’s cooking and pottery imaginations alight.

A dream, long-held by Emma, came to fruition in 2013: The Hive – Centre for Learning Beyond the Classroom. This modern, self-contained building now provides a base for children’s outdoor learning experiences and is also perfect for teacher training or as a small conference venue for local community partners and organisations. LGT committee members meet there annually. The Hive’s natural cedar panelled design ‘sits’ beautifully, an integral part of the grounds, with rainwater, for use in the garden, channelled from the roof into numerous water butts. The children, together with Emma, designed the outstanding Garden of Inspiration contriving a pretend river with blue stones, one painted by every child in the school. Here there are interactive sculptures for music making amongst sunflowers and scabious, a rainbow trout wind-sock, grasses and succulents. Another great wooden carving, a giant Phoenix, stands guardian to an amphitheatre for children’s outdoor performances. A wildflower meadow sits to one side, with allotments, bottle greenhouse, polytunnel and a small fruit orchard on the other. Every visitor is bowled over by the scale and variety.

2014 was equally memorable. A replica WWI bunker made from sandbags was built in the wildflower garden. The children were part of growing plants for the Miracle Gro Garden at RHS Chelsea, which won a Silver-gilt medal! In July, Boston West Academy became the first educational establishment in Lincolnshire and only the 6th school nationwide to be awarded Learning Outside the Classroom Mark at the Gold level, awarded by the national Council for Learning Outside the Classroom. In 2015 LGT members returned, enjoyed Emma’s uplifting planting workshop and expressed their awe at all the changes. Long consulted nationwide as volunteer education officer for the Association of Gardens Trusts (now known, together with the Garden History Society, as The Gardens Trust), Emma continues as leader of outside learning at Boston West working to develop in-house staff skills and those of other teachers and teaching-assistants in other schools.
Earlier this year, Mike wrote to thank parents, to tell them about his impending retirement.

He said: “I have loved almost every minute. My aim from the start has been to give our children the very best educational experience possible – my passion and drive has never faltered. In June 2016, Ofsted gave their view, which supported what many already knew, that Boston West is an ‘outstanding school’. It’s been quite a journey, with so many memorable moments. Together we have created an amazing place, where our children are happy, enjoy learning and have a wide range of opportunities that enable every one of them to flourish. None of this could have been achieved without the ‘right’ people, working together and giving their all for our children – the staff team at Boston West is terrific!”

Mike has turned the tables. From failing school to being judged ‘outstanding’ in every category, thanks to his dedication, and the equally untiring, imaginative and focused support of his wife Emma, and that of the team he has built, Boston West Academy is now one of the most talked about schools, a beacon not just here in the county but in the whole country. Witness a current inspirational list of awards, heralding the grounds and their key educational role in every subject of the curriculum.

Do see, and share, the school’s inspired video online: bostonwestacademy.co.uk/inspirational-outdoor-learning/

It hasn’t all been just about the vibrant, natural environment. In January 2017, for instance, seventy-four children from Year 5/6 took part in the Young Voices Concert at Sheffield Arena alongside 5,500 other children from around the country. This dynamic yet quietly modest, gentle man leaves the seeds he has sown and crops he has grown, having completed forty years’ teaching, a remarkable twenty-seven as a head teacher, for a well-earned retirement – doubtless looking forward to other adventures!

Many members of his family, friends, teachers, trustees, administration and education colleagues, and of course all the schoolchildren, will join me in wishing Mike and Emma all the very best. We congratulate and sing his praises for the huge difference he has made, with Emma at his side, to the whole community and much further afield. There is much heartfelt appreciation and gratitude for his capable, charismatic and caring leadership and hard work. The ‘Let’s get out there!’ philosophy will live on as long as the school walls are garlanded with multi-coloured ‘wellies’ for every child. Much more than making music, and getting by with a little help from his friends, Mike’s exemplary legacy is for the whole community simply to love the school, and year-round, whatever the weather, making the most use of children’s and staff’s talents and every asset, artwork and corner of the blossoming and productive school grounds. Job done!