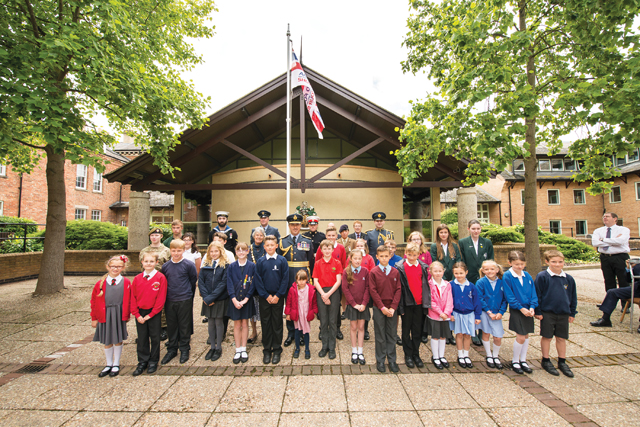 More than 100 guests stood shoulder to shoulder with veterans at an evening to celebrate the contribution that they and current Armed Forces service personnel make to the community of North Kesteven.
In its tenth year, the annual presentation of Veterans Badges saw pin badges awarded to twelve people in recognition of the service they have given to the British Army, Royal Navy and Royal Air Force over the years. These included a ninety-two-year-old Normandy veteran who received a standing ovation, and a Falklands War veteran.

In making the formal presentation of the Veterans Badges, RAF Cranwell’s Station Commander Air Commodore Chris Luck MBE said it was “right and fitting” that all veterans’ service was recognised on Armed Forces Day.

Among the twelve recipients, there was representation of service in almost every year spanning sixty-two years from 1942 to 2004.

Also rewarded for their efforts in bringing colour to make Armed Forces Week were Ryan Leigh (11) from Church Lane Primary School in Sleaford, whose poster design was the overall winner from 108 entries.

The evening – which included music from RAF Cranwell’s Spitfire Choir, the Billinghay Ruffs and Tennyson Collective – was compered by Sqn Ldr Howard Leader, an RAF reservist with 7644 Squadron of the Royal Air Force, who has a Sunday evening show on BBC Radio Lincolnshire.