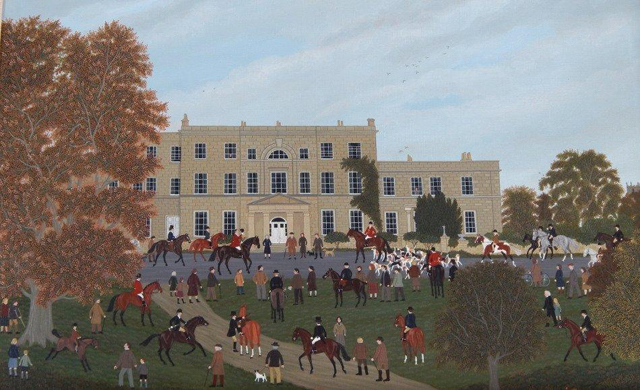 An exhibition of paintings and prints by one of Lincolnshire’s important 20th century artists has been held in Lincoln.
Sponsored by Lincolnshire auctioneers Golding Young & Mawer and estate agents JH Walters, the exhibition offered a timely moment to reflect on the works of international artist Vincent Haddelsey following his death in Paris in 2010.

Held at the Sam Scorer Gallery on Drury Street, Lincoln, for twelve days in April, visitors could view original works and purchase a number of signed, limited edition prints. Some £2,000 worth of prints sold during the exhibition.

Born in Grimsby in 1934, Vincent Haddelsey lived at Canwick, near Lincoln, as a child and enjoyed riding with the Blankney Hunt and being on foot with the Cranwell Beagles. During his early career, his work was sold at a gallery on Lincoln’s Steep Hill and some of his paintings featured Lincolnshire scenes, including ‘The Blankney at Canwick Hall’, ‘King’s Troops rehearsing before the Lincolnshire Show’ and ‘Polo Match at Belvoir Castle’.

Vincent was a self-taught artist who acquired a love of horses at a young age and travelled the world in pursuit of his subject matter. He studied horses and landscapes in Mongolia, China, India and Chile; participated in the rodeo in Mexico; rode with hounds in Europe and show jumped in England and Canada, all the time painting the scenes he saw.

Preferring to be known as an ‘equestrian painter’ rather than an artist, he exhibited widely, wrote and collaborated on books about his work, and has paintings included in the Royal Collection among others.

Although he travelled the world in pursuit of his subject matter, he never broke ties with Lincolnshire and many of his best works focus on scenes of horses at work and play in the county. His works often appear in the Lincoln auction rooms and attract good prices from collectors and those with an interest in equestrian scenes.

This retrospective exhibition offered a rare opportunity to see the work of this fascinating and widely travelled Lincolnshire born artist who never lost his connection to the county.