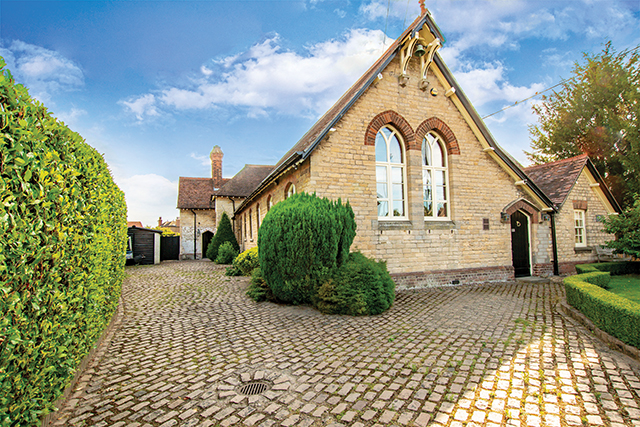 With a wealth of original features, The Old School House in rural North Lincolnshire has been beautifully transformed into the perfect family home.

A unique four-bedroom house in the pretty village of Hibaldstow near Brigg, The Old School House, which dates back to 1873, is an outstanding example of how sympathetic renovation can transform an authentic historic building into a bright and airy living space, ideal for both entertaining and working from home.

The current owners, Kate Vickers and Ruth Wilkinson, have lived here 18 years during which time they have created a special dwelling which has become an iconic landmark within the friendly, close-knit village community.

The couple moved to Lincolnshire from Buckinghamshire after looking for a home with enough downstairs space to grow their successful IT business and within easy reach of clients in Scotland and the south of England.

With its unspoilt potential, magnificent Great Hall and 3,500 square feet of space on offer, The Old School House easily ticked all their boxes and was top of the list.

“As soon as we saw the house, we knew we were going to live there,” says Ruth, who up until recently was the operations director of Karu Ltd. “Historically, a headmaster’s house would be built in the grounds of the school, but for some reason, this house was attached. This meant that we had the Victorian house at one end of the property and the Great Hall with its 19ft high ceilings at the other. Also, the downstairs was three times the size of the upstairs, which we liked.

“We drove up to Lincolnshire for a viewing in November 2001 and stayed in a B&B in Market Rasen. I had always wanted to live in a house with golden and yellow stones and despite going to see it on a horrible dark, rainy day, this golden house with its original school bell shone out!”

The Old School House remained a educational establishment until 1980 when it was bought by the New Life Church and then used as a place of worship and community centre for the next 20 years.

In 2000, it was purchased by a couple who applied for planning permission to turn it into a domestic dwelling by joining the Victorian headmaster’s house to the school building and in 2001, Ruth and Kate spotted the building for sale and moved in five months later.

“The house needed a custodian and a bit of TLC,” says Ruth. “We lived in it for a while before starting the renovations because we wanted to make sure that whatever we did was sympathetic to the building.”

Restoration project
One of the first projects was to restore the original windows. Ruth explains: “The house isn’t listed so technically we could have replaced the windows more cheaply by bringing in a double glazing firm, but we wanted to preserve the integrity of the building by keeping the original oak windows. The oak had been in there for 125 years and very little was wrong with it, except a little water damage.”

Next, the couple installed a bathroom upstairs, decorated the bedrooms, restored the sitting room at the back of the house and turned the old scullery into a laundry room.

In the Great Hall, which is the focal point of the building, a partition was removed, the hall was painted and decorated and turned into a homely space.

Ruth says: “During the first year, we saw that people in the village were really curious as to what was going on inside the house. So we threw open our doors for a jacket potato and chilli night and 88 people turned up! It was brilliant and entrenched our core beliefs of belonging to a community.”

The renovations continued with a garden room built in 2007 and in August that year, the couple held their civil partnership in the Great Hall with 68 guests attending the ceremony and formal lunch and 125 guests for the evening celebrations.

“I’d always wanted to walk from the church to home when I got married and all our guests walked through the village in their hats and finery,” said Ruth. “It was a beautiful day.”

Versatile living
In the kitchen, the floor was dug up and half a tonne of concrete was poured in to support the Aga. Ruth says: “Throughout the work we decanted to one or the other end of the house, so luckily we still had the boys’ and girls’ toilets and shower rooms to use.”

It took 10 years in total to complete the renovations – an estimation which Kate, a business consultant and change management specialist, had predicted.

During this time, the two milestones which stood out were installing cabling and Internet access in the office to enable the owners to video conference, and a sound system in the Great Hall.

This historical character property also benefits from a self-contained studio annexe, which could be let to produce a rental income and also has the potential to create a first floor room utilising the space that the double height ceiling offers (subject to the appropriate permissions).

The versatile living accommodation and layout, when coupled with the self-contained annexe, make an ideal home for those considering multi-generational living.

Entertaining and socialising
The couple have entertained extensively over the years and held many charity events in their home, as well as cookery demonstrations and a regular Christmas party.

“It is a great home to invite people to, make them feel welcome and enjoy yourselves,” says Ruth. “When we closed our business, we turned the office and facilities into an annexe, which has added another dimension to the property.

“In Covid times, The Old School has come into its own. It has been brilliant as it offers separate space to work and anyone with children would have their own classroom, while the annexe means that multi generations could live together, but still maintain their independence.

“The kitchen and Victorian garden have kept us supplied with fruit and veg and the local Co-op has been a vital lifeline for the village, so that we have not been caught up with the complexities of the big supermarkets.”

The couple have now closed their business and are looking forward to the next chapter of their lives: “If Covid has taught us anything it is to take hold of our lives and enjoy it. Hibaldstow is a very community orientated village and The Old School House is ready to welcome the next owner – we can highly recommend it as a great space to live, work and play!”