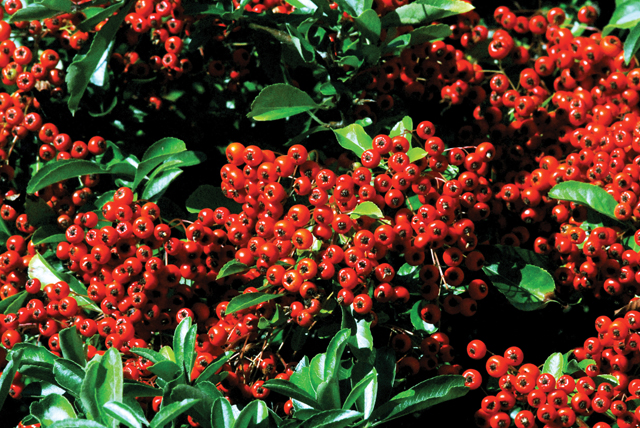 Steffie Shields focuses on decorative autumn fruits.
‘Better than any argument is to rise at dawn and pick dew-wet red berries in a cup.’ I enjoy trawling for, and coming across, apposite quotes when writing or speaking to garden clubs. This charming line amuses me – by an American novelist and poet whose surname just happens to fit this month’s topic. As a farmer, Wendell Berry (born 1934) found plenty of inspiration for his writing in his country surroundings.

Small, edible, fleshy fruits with the seeds usually embedded in the flesh, berries are colourful, round, semi-oblong or oval magnets to the eye; nature’s way of attracting birds and wildlife, to disperse seeds more widely in their droppings and ensure the survival of myriad species. Strawberries, raspberries, blueberries, gooseberries and many more fruits, whether sweet or sour, are of course suitably delicious and may be consumed by humans, but I am not going to focus here on the edible and juicy varieties, but rather those that are highly ornamental in the cycle of life.

Amelanchier, one of my favourite trees, has berries in July, and holly berries belong to Christmastide. Here I would rather concentrate on the November scene. Do not disregard the common or garden hawthorn, Crataegus, called a ‘quick’ hedge or quickthorn, because of its speed of growth – the perfect tool for eighteenth century enclosures, and now ubiquitous in countryside hedgerows. Waxwings and thrushes are particularly partial to hawthorn berries or ‘haws’. Known as Hag in Old English, and also called whitethorn or May tree, it symbolised hope in the legendary Victorian language of flowers. It is interesting to think we garland our fields with hope. If you grow a hawthorn such as Cratageus prunifolia with plum-like foliage, as a lone feature tree, from October onwards its berries will lend it a cheerful, hopeful presence.

Those with small gardens have to be clever in the choice of ornamental tree or shrub. Of course many shrub roses, displaying big juicy hips after the flowers fade, are firm favourites and good doers. Look around townscapes and over garden walls for ideas. The mountain ash or rowan (Sorbus is the botanical name) seems hugely popular. There are more than 100 species to choose from, variously producing orange, yellow or pinkish white berries besides every shade of red. Have you noticed mountain ash trees this year? I cannot remember a better show of clusters so rich in lipstick-red berries. Mother Nature being good to us again, as days shorten, morning mist lingers, and cloudy, drab days descend, arranges for us to have something to lift the spirits, letting the dangling bunches cling onto bare branches often right through winter. Get your phone cameras out if it snows. The berries look fantastic capped with white crystals.

Some folks imagine Sorbus berries as the berries that fairies feast on. Some see them as a sign of welcome, some a sign of life. Others think of yew berries as a sign of death. Some observing the hedgerows full of haws and hips shake their heads knowingly and, depressingly, predict a harder winter. Could it possibly be worse than last year?

Has anyone undertaken a proper scientific study, across a couple of decades at least, comparing numbers of berries on one tree to the average winter temperature? Research is complex because, besides temperature, nature responds to inches of rain and hours of sunshine. This year we witnessed plenty of both. Was it by chance, or was it to provide enough food for a whole variety of birds, including those that migrate to overwinter on these shores? Has she really the power to predict every facet of changing climate and anticipate the harshness of a season to come?

The evergreen Viburnum has ovoid blue berries that glisten with a metallic sheen, a useful contrast for flower arranging. Those of the so-called Beauty Bush, Callicarpa, also metallic, are a distinctive purple. To me these berries look like plastic beads, as if the bush was decorated with dollies’ necklaces. I prefer a variety of spindle tree, Euonymus alatus, known as winged spindle, or burning bush, native to China, Japan, and Korea – a touch of the exotic. It is popular in parks and pleasure grounds for both its red autumn colour, and the fruits that cling on long after the leaves have fallen. I remember enjoying photographing its bright berries on a particularly chilly, dank, and dismal November day. The pink winged berries with orange seeds like miniature pumpkins seemed to float gracefully in mid-air, as gay as children’s sweets, and looking like ladybirds in flight. Be warned, because the berries are somewhat poisonous.

Many confuse Cotoneaster, a deciduous or evergreen shrub or small tree, with Pyracantha. Every garden and park should have at least one species of both these compact sun-loving bushes. Their pea-sized bright berries, so similar because they are related, look good up against the walls of a house. Cotoneaster has showy red, purple or black berries, but brilliant red, orange or yellow Pyracantha berries tend to grab more attention. Anyone who has pruned the latter will distinguish it, for it has rather lethal thorns, giving rise to the common name firethorn.

I love to watch blackbirds or wrens outside my study window, nimbly plucking and gobbling down whole berries in one go. Then again the graceful red-decked branches of Cotoneaster hybridus pendulus, a hybrid tree with a weeping habit, can be just as heart-warming. I intend to plant one this month.

Recently, I have been visiting a wide spectrum of public parks in East London, Dublin, and in Lincoln – plenty of urban green space in which to cogitate. All have a story to tell. Parks are the lungs of wellbeing and family life, but are only cherished by local communities if they feel safe. As one park’s superintendent put it: “The mother with a toddler in the pushchair is my canary. If I do not see her in the park, it must be run-down.” Sadly, parks are often on the bottom of the list when it comes to funding. Like roads, a constant strain on local authority resources, they always need upkeep and restoration.

It is great news that a joint venture between the learning disability charity, Linkage Community Trust, and the City of Lincoln Council to restore Boultham Park has been awarded £2.7 million from the Heritage Lottery Fund (HLF) and the Big Lottery Fund (BIG). But it is impractical to rely on national funding for every park. A cycle of regular restorative planting to uplift the scene needs to be factored in and local volunteer help or ‘Friends’ engaged.

The latest trends for designers have been, as in the amazing Olympic Park, towards supposedly sustainable wildflower meadows and acres of prairie grasslands interwoven with swathes of perennials, occasionally interrupted by ghostly silver birches. But what do such spaces look like in November? Do they make us look forward to shiny red ornaments on the Christmas tree, or think of New Year festivities? Yes, I missed seeing berries, for as Hartley Coleridge observed:

‘The merry year is born
Like the bright berry from the naked thorn.’