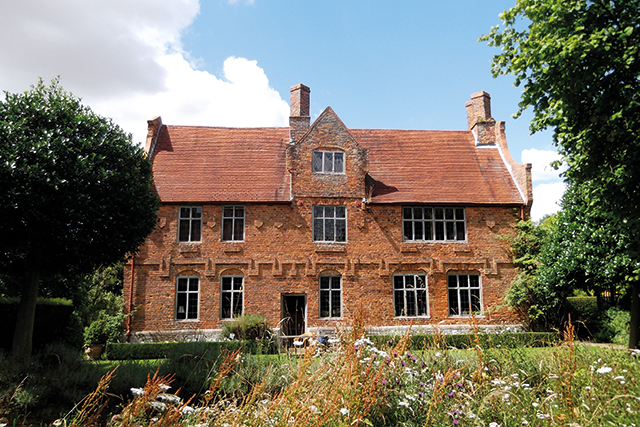 Steffie Shields explains how the late Dr David L Roberts’s exceptional book Lincolnshire Houses was finally published.
After the recent launch, a dear friend recommended Lincolnshire Houses as a “must”. I read the foreword eagerly before consulting the in-depth index to seek out specific buildings spied on many journeys. Leafing through, I stopped to admire striking photographs, or dip into paragraphs packed with beguiling detail. I defy even the most dedicated student of architecture or social history to read through all 672 pages in turn! That is not the point.

Raised in Nottinghamshire, schooled in Sleaford, and living one time in Westborough while teaching art at Newark College, Dr Roberts’s innate curiosity led to one broad ambition: to explain how, and why, Lincolnshire houses were built. By 1972, an architectural historian specialising in secular buildings, his original suggestion won the approval of the History of Lincolnshire Committee: he would chart the evolution of house architecture from the medieval to the early twentieth century, by examining as many interiors as exteriors, old-fashioned, limestone buildings of consequence, mud and stud estate cottages, even analysing those pulled down, ransacked or destroyed by fire. Besides the necessary survey skills, he had focused drive and plenty of charm, so was never refused access when he knocked on owners’ doors.

Roberts was probably motivated by what Henry Thorold cleverly coined as ‘goneness’: such as Dalderby’s one-off picturesque, thatched, cruck Teapot Hall, burnt down in 1945, which features among other examples of Lincolnshire houses demolished in unprecedented numbers since WWI (more than any other shire). Soon, a landmark London exhibition at the Victoria and Albert Museum, with Sir Roy Strong in charge, famously drew this cultural loss to national attention. The Destruction of the Country House (1974) was co-curated by Marcus Binney and architectural historian/author, John Harris of No Voice from the Hall fame. Roberts later collaborated with the latter in the 1989 revision of Nikolaus Pevsner’s The Buildings of Lincolnshire.

Moving to Scotland in intervening years, meticulous investigations and plan-drawing continued, while working to restore houses and as a successful artist. Roberts reflected on influences from outside Lincolnshire, especially Dutch, spreading inland from port regions, Hull, Grimsby, and Boston, questioning: “Did this give rise to Fen Artisan Mannerism? When did asymmetry creep in? Was there such a thing as a Lincolnshire vernacular or style?”

Sadly, in 1997 his unexpected death from a heart attack, aged 63, after a lifetime dedicated to research, left his book unfinished, the last two chapters in loose draft form, and hundreds of photographs, many unlabelled.

Shortly after the Millennium, his widow, Marion Roberts, approached a Lincolnshire publisher. Huddersfield-born Shaun Tyas had been living in Stamford since 1982, and six years later set up his own one-man business. He was about to move that November to an interesting old farmhouse (c. 1700) and former public house, The Old Peacock in the heart of Donington, with better storage space. But, despite his own interest in architecture, he reluctantly rejected the proposal, recognising insurmountable problems in the process of publication of such a complex work, without any input from the author.

Recovering from the move, Shaun was already having second thoughts when Mary Anderson, a local conservation architect telephoned offering to help editing academic content, enough to persuade him. They both worked closely with Marion to fill in gaps and beef up information in footnotes. Given their ongoing professional day jobs, no-one realised the mountain worth the climb would take another fifteen years.

Shaun confesses: “The long evolutionary process which most books go through is often more complicated than the construction of a building” – a huge understatement. Few of over 700 black and white photographs were captioned, nor engravings’ sources listed, nor copyright permissions sought, and the abbreviated, often inaccurate bibliography was incomplete, an editorial nightmare. Herculean tasks followed: digitally scanning and proofing vast numbers of photographs, double-checking facts by buying many reference books, consulting the British Listed Buildings website, and correcting mis-identified pictures by onsite visits all over Lincolnshire. Another challenge, Shaun persevered to complete the last two chapters, little more than drafts, endeavouring to maintain Dr Roberts’s voice.

The book was worth an extra ‘labour of love’. His twinkling eye as keen as the author’s, Shaun introduced seventy-seven colour plates, mostly his own photographs, to engage the reader. Several, fascinating Hilkiah Burgess paintings, courtesy of the Spalding Gentlemen’s Society, include an 1820 view of Uffington House, typical of Restoration grandeur, gutted by fire less than a century later.

Having produced, single-handed, over 200 nonfiction titles, ten a year in the last decade, in addition to the annual Proceedings of the Harlaxton Medieval Symposium, an internationally recognised publication, Shaun is inordinately proud of this book’s layout, with not a single piece of white space wasted. Considering the numbers and range of illustrations, photographs and plans, this is a ‘tour de force’. Gregory Gregory’s flamboyant Harlaxton Hall spread across the title-pages, compared with a nostalgic tail-piece, Harlaxton Old Manor House (long gone) is just one of many deft touches.

One can forgive the odd indulgence, such as selecting two personal favourite houses for the dust-jacket front and back. The latter, Aslackby Manor, I remember standing in the garden on my first visit, almost swooning at the sumptuous sweep of the brick gable end. The eye-catching cover, Dowsby Hall, now tops my ‘must see’ bucket list. By 2016, as editor, with permission to be ruthless, Shaun completed a second edit, changed page size and adjusted layout. With index, foreword and bibliography finally sorted, late 2017 saw one final edit, and double-check, with every photograph re-processed in correct resolution.

This summer, almost fifty years since first floating the idea, as vintage wine matures, so Lincolnshire Houses was published to positive reviews, a wonderful way to celebrate three decades in publishing, the late Dr Roberts’s portrait beaming in approval on page 1. I went to congratulate Shaun in his Donington home. Self-effacing, and insistent he should remain almost anonymous to ensure due recognition for Dr Roberts, he admitted gratefully and, for an avid, lifelong, collector of books, surprisingly: “This book changed my life. It opened my eyes to the beauty of Lincolnshire and its buildings. We have some of the best houses in the country.”

Weighty in all senses of the word, this absorbing, useful hardback is accessible, inspirational, easy to read, and at £35, reasonably priced. Whether ‘yellowbelly’, incomer, or interested tourist, anyone who invests will not be disappointed. Keep it close to refresh recollection or secrete in your car glove compartment for forays across county. Scholars and professionals investigating Lincolnshire’s historic built environment will tuck it next to Pevsner’s equally admired conservation guide in pride of place on their bookshelves.

Here are subtle, ground-breaking conclusions. Roberts suggests seventeenth-century imports of Norwegian timber, to solve a dearth of local building materials, might be the origin of ‘flat-pack’ house kits. As for that question of vernacular, he succeeds in highlighting sensible simplicity in the county’s architectural characteristics, with one exception: mid-seventeenth century fen artisans bringing back more elaborate Jacobean styles. A pattern of survival and rebuilding stemmed from typical traits engrained in old Lincolnshire: cost, practicality, reluctance to show-off. Roberts shares his ‘understanding, joy and enthusiasm’ beyond the grave, thanks to those owners’ lives he touched, and to the enduring faith, and labour, of his widow Marion, Mary Anderson and Shaun Tyas, without whom this epic treasure trove – the perfect Christmas gift for many of your friends – would never have seen the light of day.