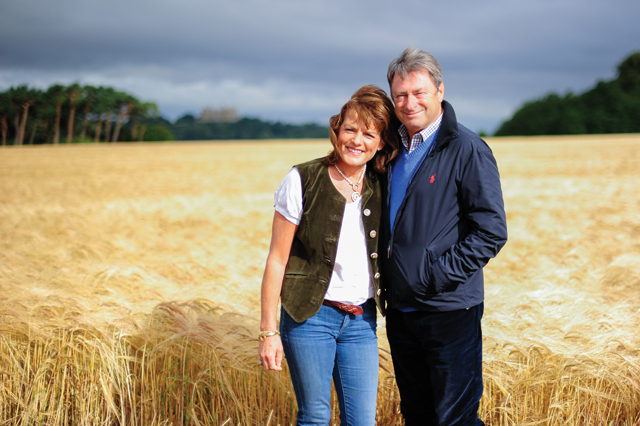 Steffie Shields recommends Emma, Duchess of Rutland’s new book: ‘Capability’ Brown and Belvoir – Discovering a Lost Landscape.
Belvoir Castle vaults house many secrets. One powerfully moving story has, at long last, been revealed by Emma, Duchess of Rutland. A clue is in the name ‘Belvoir’, simply meaning ‘beautiful view’. Forget shooting, forget the castle, her unique publication sensitively co-authored by Jane Pruden captures ‘sense of place’, a stocking-filler must for all lovers of English landscape gardens.

At her book launch at Christies recently, Emma welcomed guests on her white stallion, flanked by hunt staff and a pair of Belvoir hounds, bringing King Street traffic to a standstill! Timing and show help to get a great news story out to a world bogged down in political debates over crises and problems of human suffering.

Celebrity TV gardener Alan Titchmarsh was the obvious choice to reveal the ‘find of the century’, which featured in his recent More4 series.* The duchess invited Titchmarsh to cast his eye over a huge plan, bigger than your average dining table, the first plan by the father of landscape architecture Lancelot ‘Capability’ Brown (1716–1783) Alan had ever clapped eyes on. We witnessed the most natural, professional communicator, for once, completely lost for words!

This master plan (1780) to develop Belvoir, in pen and watercolour, has lain ignored, rolled up and gathering dust in the private castle archives, together with the original survey mapped by his chief surveyor, John Spyers, and a priceless, leather-bound, gold-embossed folio of ten detailed architectural and landscape proposals, plans that garden historians had wrongly assumed were long lost in the 1816 castle fire. Brown, still pushing the boundaries, was so proud of this large album, conceived in the twilight of his career, including the latest engine house to pump spring water to the castle. He took it to show Horace Walpole, the garden writer, long before Humphry Repton first put his watercolour brushes to paper to sell a landscape scheme.

These unearthed treasures deepen our understanding of Brown’s long-term artistry, icing on the cake for the Duchess and Jane Pruden. They intertwine history and recent happenings, in engaging, easy-to-read style, their interpretation helped by Johnny Phibbs, historic parks consultant, whose extensive knowledge of Brown landscapes underpins the book.

Much more than the castle meets the eye thanks to a bevy of garden-loving châtelaines: Elizabeth, Violet, Frances, and now Emma. These determined duchesses have been rightly credited with vast improvements: changes to the water to mirror the castle; to the roads for a smooth, intriguing approach through light and dappled shade; walled gardens; picturesque lodges; tunnels, church views and floral garden walks. Each duchess became intrigued, and then inspired, by the special place, as much as their predecessors.

Brought up at Castle Howard, Elizabeth, on marrying the 5th Duke, was the first, between 1800 and 1828, to bring more ‘capable’ Brownian ideas to fruition including lakes, stone bridge and sophisticated walled gardens. Later, in 1906, Violet, 8th Duchess, brought in electricity and landscape architect Harold Peto whose ship-shape, Italianate design altered the rose garden terrace. In 1970 Frances, Dowager Duchess, a gifted gardener, discovered the overgrown Spring Gardens. She restored the now-called Duchess Garden and Hermit’s Garden. Each chatelaine in turn, as actors and directors, interpret the scenery for a Shakespeare play, planted exotic trees and roses, and brought regeneration, life and glorious variety to the castle setting.

The book also charts the recent team effort: Emma, together with Belvoir agent Phil Burtt, now her partner, restored Frog Hollow lakes first, and then, motivated by Brown’s perfectionist ideas, to link with and extend existing lakes as if a river across the whole estate, created the Memorial Lakes. Phil seems, like Brown, a practical man of action who observes and understands both game and land. Meanwhile, garden designer Nikki Applewhite and partner Martin Gibbs advised and worked on the pleasure gardens with Belvoir’s forester Richard Sochachi, and celebrated plantsman Charles Williams of Burncoose Nursery, Cornwall. They all negotiated Blackberry Hill like nimble mountain goats to clear undergrowth, and then plant hundreds of rhododendrons and camellias along the Duke’s Walk and in the equally affecting Duchess’s Garden.

Nikki showed me newly opened ‘peeps’ to the castle inspired by Brown’s plan, and also Alan Titchmarsh’s wavy perimeter planting. Given time, this will mature to clothe the bare hill below Harston with a lush, mixed belt of trees reflected in the new lakes. Having followed a strikingly similar journey from ‘Nobbut a Lad’ Yorkshire roots to Ground Force fame and fortune, Alan, more than most, appreciates Brown’s upwardly-mobile journey. Somewhat daunted and humbled, he had never planted on this scale before.

Removing silt and vegetation from lakes and watercourses, wielding heavy machinery, trenching ground for plantations, and planting acorns for future horizons is essential for estate regeneration, besides sporting, hospitality and wedding business. Two and a half centuries ago, Brown’s similar engineering works and scene-setting gave employment to out-of-work soldiers, agricultural labourers and immigrant weavers. He knew that hard graft improvements offered emotional stability and hope to local communities.

Sweeping drives, river-lake commas, singleton feature trees in parentheses and full-stop tree clumps such as the Cedars of Lebanon and Scots pine on Cedar Hill towards Croxton, enabled Brown’s clients to read and enjoy their land as well as exploit the topography for agriculture, forestry and sport. His storylines feature at over 260 sites, including Alnwick, Blenheim, Burghley and Chatsworth. Sadly, few estates have surviving Brown designs to reap the full benefit of his vision in improvement/restoration decisions today. However, his enduring influence is now properly acknowledged at Belvoir. What better timing than uncovering this treasure trove, just as the heritage world plans the first-ever national festival in 2016 to honour ‘Capability’ Brown’s Tercentenary.

Read this extraordinary tale and admire the photographs with almost as much pleasure as exploring Belvoir’s landscape gardens on foot. Then go and visit Belvoir to see the remarkable recent improvements for yourself. See where he moved earth to marry the castle mound to the high escarpment, and softened the crags with planting. See his Holm oaks providing year-round shelter from prevailing winds. Pick out his rounded canopies, remnant tree clumps, centred on a stately Austrian pine sticking out above the treeline atop Blackberry Hill. Everyone driving round the undulating hills and lanes around Belvoir cannot fail to be uplifted by these acts of faith in the future.

In her book launch speech, Emma shared the postscript to a poignant letter to the 4th Duke of Rutland dated 1st October 1782, only four months before his death. ‘Brown grows very old and nothing done to ornament the Castle. Since it is denied us to live long, let us do something to shew we have lived.’ Weary, plagued by asthma, his disappointment in the Duke’s enormous debts is palpable. Remembering his first dynamic patron, Lord Cobham, Brown had paraphrased Alexander Pope’s lines etched on Stowe’s memorial column that he built long since, in the faint hope of spurring the Duke into action. He would be delighted that Emma has been making amends.

FUNDRAISING CAMPAIGN
Steffie Shields is supporting a fundraising campaign to raise £50,000 to restore the Capability Brown memorial at St Peter and Paul’s Church Fenstanton, Cambridgeshire (the one that Alan Titchmarsh forgot to mention in his recent More 4 TV series on Brown at Belvoir!). It is hoped to restore the memorial in time for the national 2016 Capability Brown Festival visitors. Please send donations – every little helps – to: Steffie Shields, The Old Orchard, Church Lane, Welby, NG32 3LS or donate online at https://crowdfunding.justgiving.com/steffieshields